John McKee has plenty of reasons for hope in WVBC 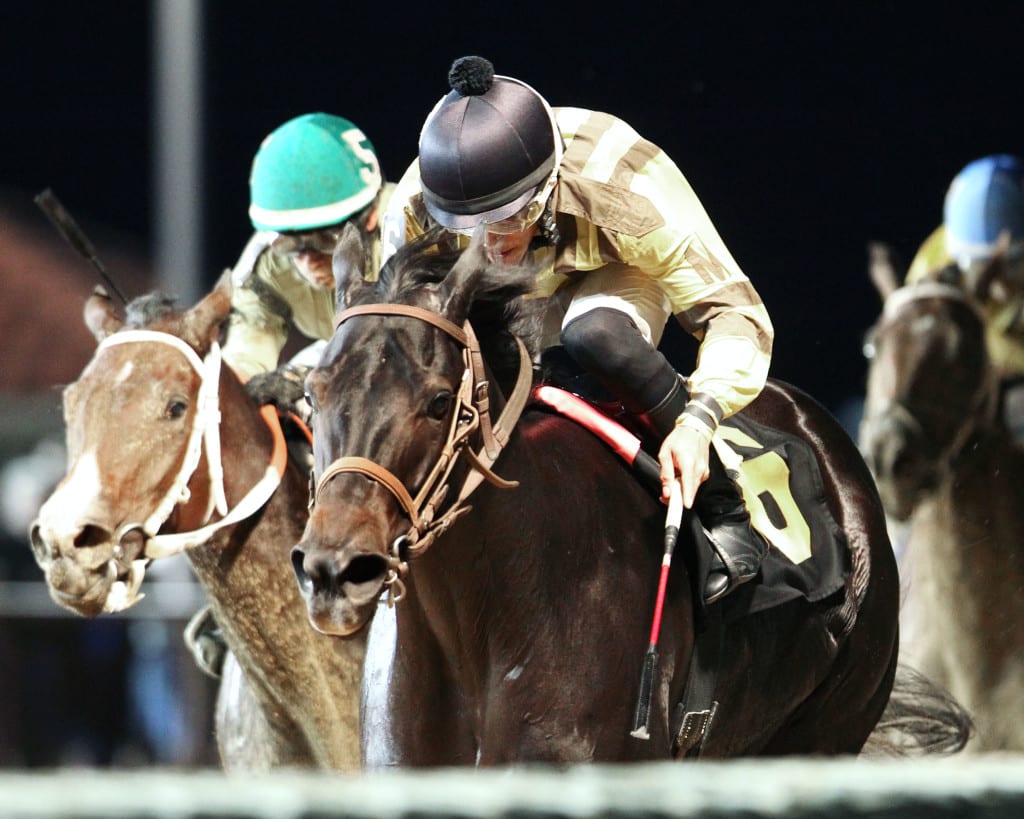 Aye a Song – a horse John McKee bred, owns, and trains – won the Rachel’s Turn, a race named for another of his runners. Photo by Coady Photography.

Throughout his career as an owner, trainer and breeder, John McKee has been prominent on West Virginia Breeders Classics night, posting wins in almost every race on the card.

Saturday, October 10, the longtime trainer and breeder will be looking to make a trio of trips to the winners circle. Two of the horses, Aye a Song and Imaflashyfellow, he still owns and trains, while a third, Hidden Canyon, will likely look for WVBC success in one of two races for trainer Javier Contreras.

Aye a Song, a two-year-old daughter of Fiber Sonde that McKee bred, owns and trains, has won both of her starts, including a recent victory in the $50,000 Rachel’s Turn Stakes. That victory was doubly rewarding for McKee because he also owned, bred and trained the race’s namesake who won 15 of 35 starts and earned over $150,000 during a career in which she won two WVBC stakes.

“I have been trying to win that race ever since they added it to the stakes schedule,” McKee said of the Rachel’s Turn. “I’ve had something in there almost every year, but this was the first time I won it. Aye a Song is a nice filly. She even traces back three or four generations to Rachel’s Turn through another mare I had named Aye’s Turn.”

Aye a Song has won both of her starts going the one-turn dash distance of 4 1/2-furlongs, but the Triple Crown Nutrition Breeders Classic will be run at the two-turn distance of 6 1/2-furlongs this year for the first time. The new distance will require the filly to display stamina, as well as speed.

“I know she’s fit enough to go 4 1/2, but I don’t know if she can get the added quarter mile,” McKee said.  “I will have to train her up to it and hope we don’t lose too much training to the hurricane (Joaquin).”

Aye a Song could also get tested by a key new rival, Stoweshoe, a Jeff Runco trainee, who beat the boys in the $50,000 Henry Mercer Memorial Stakes on Sep. 19 and the Lightning-quick and razor sharp Ruby Notion who won the $100,000 Selima Stakes at Laurel Park last month for trainer Wesley Ward.

“I expect to see Stoweshoe in the same race with her next weekend,” McKee said. “I heard Jeff ran her against the boys last time because he did not want to run against that sister to Jax And Jill. She beat my two colts in there.”

Stoweshoe bested two other McKee homebreds in the Mercer, Imaflashyfellow and I’m a Spot. McKee is hopeful both will run well in their state-bred event next weekend, the 6 1/2 furlong Vincent Moscarelli Memorial Breeders Classic. He will also be rooting for another horse he bred but no longer owns: Hidden Canyon.

McKee was high on Hidden Canyon from the moment the Fiber Sonde colt was born to the stakes-placed Indian Charlie mare Ghost Canyon.  But he opted to sell him privately to trainer Javier Contreras and owner Phyllis Susini. In 13 career outings, Hidden Canyon, now gelded, has won nine times, been second on three other occasions and has banked over $200,000. He was most recently second in the $100,000 Wild & Wonderful Stakes behind Pants On Fire, who may be headed back to the Breeders’ Cup Dirt Mile.

“I always liked him,” McKee said of Hidden Canyon. “I told Javier about him and he liked him. I sold him, and I’m glad to see him do well. I hope he does well in there.”

One question is, where exactly “there” will be.  The five-year-old is nominated to two races on the card: the $70,000 West Virginia Thoroughbred Breeders’ Association Onion Juice Breeders Classic at seven furlongs and the $500,000 West Virginia Breeders Classic at 1 1/8 miles.  He would be formidable in the former, while the latter has a rugged crew, including its last three winners, Russell Road, Fred High, and Lucy’s Bob Boy.  But there is, of course, the small matter of the purse to consider.

Fittingly enough, just over a week before the WVBC, on September 30, another horse that McKee bred and sold privately, Bullets Fever, won at first asking at Charles Town by three lengths against maiden special weight company. Bullets Fever is a full-brother to Hidden Canyon and is trained by Jeff Runco for owner David Raim.

“I don’t remember what we named him,” McKee said. “But they renamed him right after they bought him from me. He looked like he was going to be all right. I would like to see him do well and make his sire (Fiber Sonde) look better.”