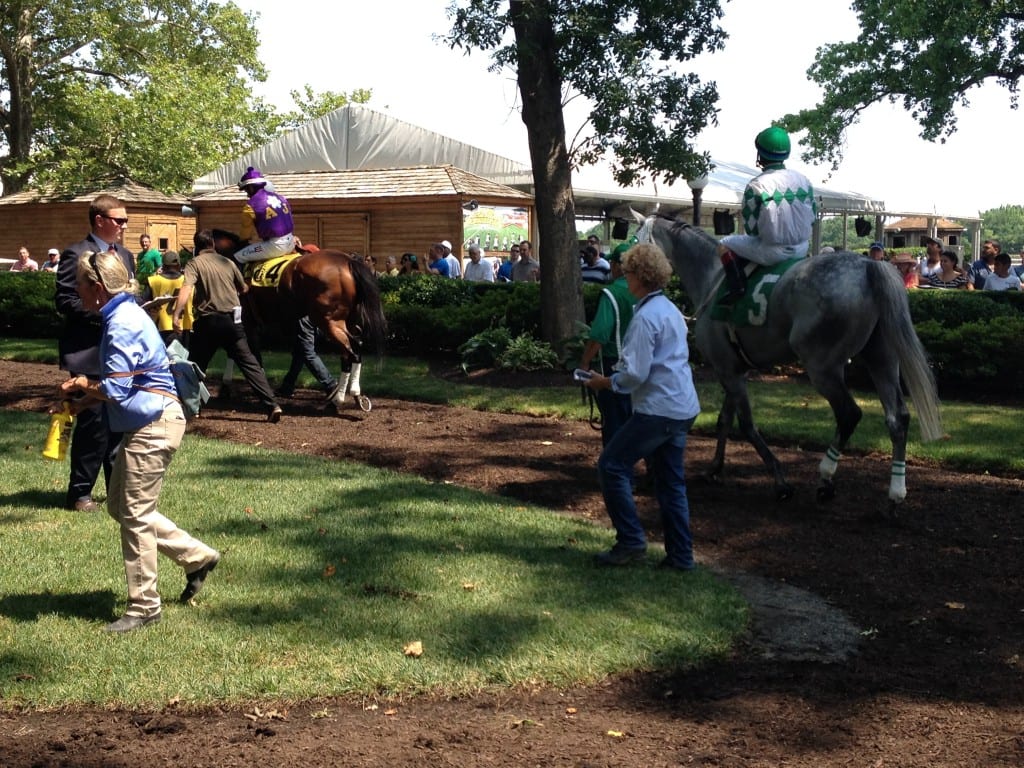 Full fields would be a more common sight if Delaware and Maryland struck a circuit agreement. Photo by The Racing Biz.

Track operators in Delaware and Maryland have been in discussions in recent months about a possible year-round racing circuit for the two states that would eliminate overlapping and conflicting dates.

The idea of a cooperative year-round schedule between the two states seems on the surface to be a no-brainer. In an industry that is horse starved, filling races and providing bettors with competitive field sizes are difficult for tracks everywhere. But putting out a racing product of any type while competing for horses with tracks in nearby states makes every entry day a battle.

Saturday’s entries for Laurel and Delaware graphically illustrate what kind of product is produced when two tracks race conflicting dates. While Laurel has six of its 10 races carded on the turf Saturday the average field size of the four races carded on the main track is 7.5 horses. Delaware has five main-track thoroughbred races slated with an average field size of 6.8 horses.

And that’s to say nothing of the region’s other tracks — Monmouth, Parx Racing, Penn National, and Charles Town — all operating at the same time.

It’s fairly obvious conflicting dates produce reduced fields and a lower competition level which runs the bettors off in droves.

Yet one voice has largely been absent from the conversation: that of the horsemen most likely to be affected.

We asked two trainers who race on a regular basis at Delaware their thoughts on the issue of a cooperative racing slate.

Mike Gorham is the president of the Delaware Thoroughbred Horsemen’s Association (DTHA) and has raced horses at Delaware Park since 1991. Gorham, a winner of over 1060 races during his career, is cautiously optimistic about the prospects of a non-conflicting year-round schedule between the two states but believes it will take some time for the idea to come to fruition.

“I don’t think there’s any question that the quality of racing would improve in this area if the tracks stop racing in conflict,” Gorham said, “If they could get together and agree to make it easier for the owners and trainers not only by not racing against each other but by agreeing to keep Delaware Park and Laurel open year-round it would make a big difference. The cost and logistics of shipping a stable from, say, Delaware to Florida and back every six months is just beyond the scope of most horsemen these days. Asking your help to find affordable housing for short periods of time is just one of the problems. Then there’s the workmen’s comp issue in each state, which truthfully is a nightmare. Then there’s the cost of shipping the horses themselves. If horsemen had a stable year-round base, I think you’d see a number of them choose to stay here instead of shipping at the end of the meet. That would help Laurel and Pimlico during the winter and early spring [and] then would also help us when Delaware opened because more trainers would already be here training over the track.”

Gorham wasn’t prepared to make any comments regarding Maryland Jockey Club general manager Sal Sinatra’s suggestion that he envisioned at 60-day meeting for Delaware Park in his plans for a cooperative schedule.

“We (the DTHA) have an agreement with Delaware Park to run 81 days, and that agreement runs through 2016,” Gorham pointed out. “We agreed to a reduction in days when we signed our last agreement, so we would have to look long and hard at any proposal that would differ from the days we’re running now. I think a cooperative racing schedule would be a good thing for the area, the bettors and the horsemen, but whatever agreement is made will have to be beneficial to all concerned. I expect there will be further discussions on the issue. At this point no one has come to the horsemen for their input on this but I’m sure if the talks get serious we’ll be hearing from them.  A working agreement could go a long way toward insuring stable, quality racing in the Delmarva region.”

Jamie Ness is another horseman who would be impacted by any changes in the current racing schedules of the two states. Ness began racing on a regular basis at Delaware Park in 2010 and has won some 220 races there.  He purchased a home near Laurel in 2014 and has won 235 races at Laurel and Pimlico since 2009.

Both Delaware and Maryland are vital to the health of his operation.

“I’m sure if the two tracks could come to some agreement on a circuit without conflict it would go a long way toward solidifying racing in this area,” Ness said.  “But I don’t want to see any deal that would hurt Delaware Park or the horsemen that are from this area. This is a great place to race and it deserves to maintain its position. I would hate to see any power plays like what has happened in some other areas.

“Racing with two horse populations to draw from, where shipping costs would be deferred, and where horsemen and their people didn’t have to worry about moving every six months would have to help the business,” he continued, “and the racing product would improve dramatically. I race at Tampa and I can tell you: size does matter. They (Tampa Bay Downs) have one of the highest average field sizes in the country and they handle astronomical numbers. We could have that in this area and everyone involved, from the tracks to the horsemen to the bettors would benefit.”