Joy and sadness for I’m a Chatterbox connections 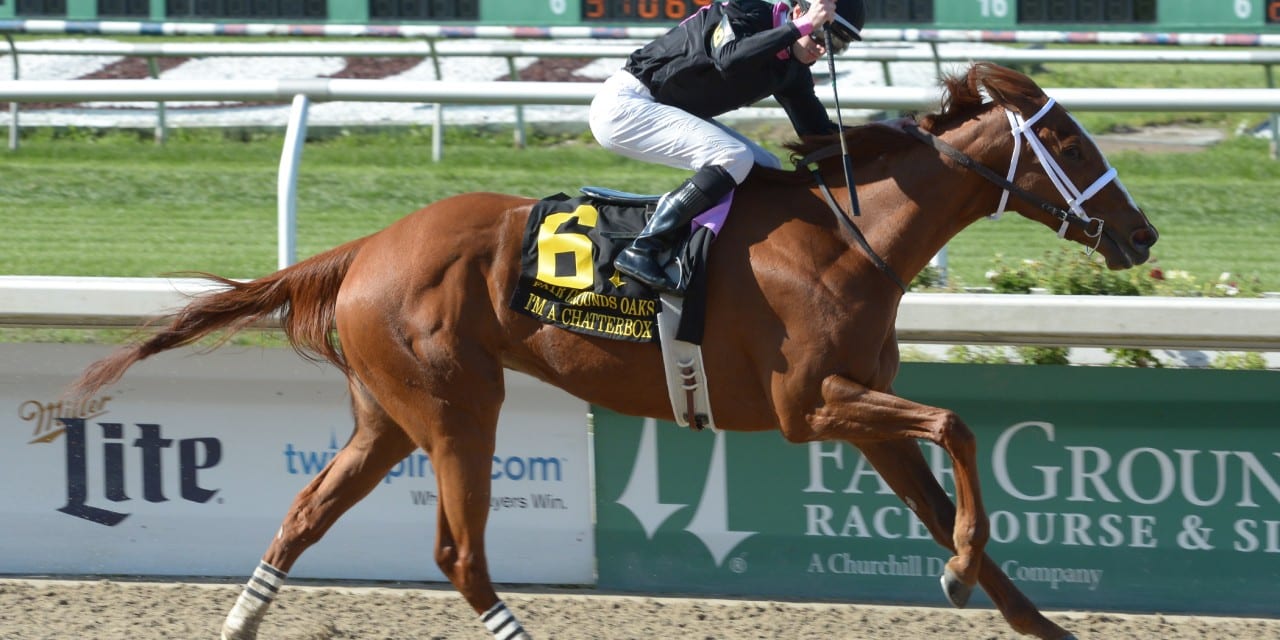 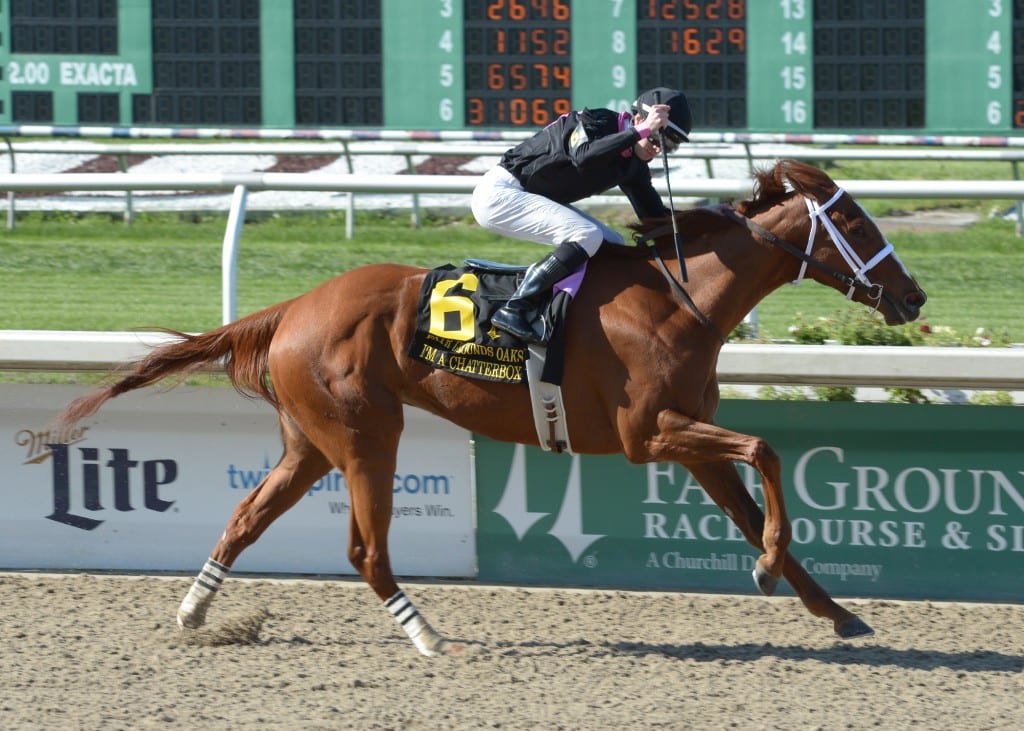 
On July 26, Carolyn and Fletcher Gray stood in a box near the finish line at Saratoga, watching as their homebred I’m a Chatterbox led a field of accomplished fillies, including a couple of Grade 1 winners, around the historic racetrack in the Grade 1 Coaching Club American Oaks.

And when she crossed the finish line first, a nose ahead of Curalina, they exulted, celebrating the filly’s first Grade 1 win.

That joy was short-lived, though: deemed to have interfered with Curalina approaching the wire, I’m a Chatterbox was placed second, giving Curalina a second Grade 1 win and leaving the Grays’ filly still in search of her first.

She got another chance a month later at Saratoga, in the Alabama, but this time, the Grays weren’t there to see it.

Carolyn’s 96-year-old mother Friederica took ill in mid-August, a week before the Alabama; she lived in a cottage on the Grays’ farm in Missouri, and the Grays stayed home to care for her. An illness earlier in the year had landed her in the hospital, an experience that she didn’t want to repeat, so Carolyn arranged for hospice care at home. Her mother passed away late last month.

“She was able to be in her own home on our farm, and I could be with her all the time,” said an emotional Carolyn this week, en route from Missouri to Lexington for this week’s yearling sale. “It was the hardest thing I’ve done, and the most beautiful, too.”

Gray watched the Alabama from home, watched as the filly she loves broke badly, then raced wide turning for home, falling short by a length a quarter and having to settle, once again, for second place.

“That’s racing luck,” Gray said. “She’s been sitting on a Grade 1, and both of these last two have been kind of bittersweet.” 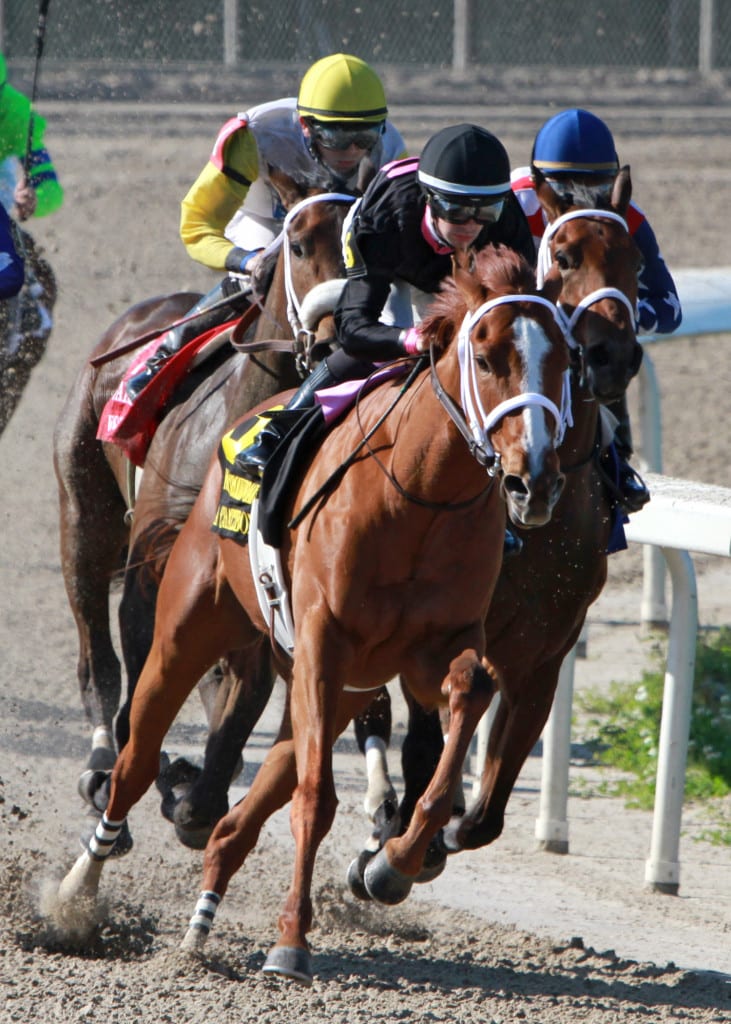 She added, laughing, “We think the third time is the charm.”

That third time will come this Saturday in the Grade 1 Cotillion at Parx, in which I’m a Chatterbox has been installed as the 3-1 favorite in a field of 11. She’ll face a handful of Grade 1 winners, including Alabama winner Embellish the Lace and last year’s two-year-old champion Take Charge Brandi.

“This one will have special meaning,” said Gray. “I want it for her, but I really want it for Mama, too.”

Gray didn’t get her love of horses from her mother, known to everyone as Fritzi, but her mother was very much a part of the life and the fabric of Grayson Farm. Until recently, she attended the races with her daughter and son-in-law; when age made that difficult, she watched from home, and her house on the property overlooked the pasture with the mares and foals.

Earlier this summer, when Fritzi was feeling stronger, a week before the illness that would claim her life, Carolyn realized that it had been a while since her mother had been to the barn to see the babies, so she got on the Gator, picked up Fritzi and her caregiver, and drove her over to the mare and foal barn.

“She was feeling pretty good then,” said Carolyn. “I only regret that I didn’t bring my camera with me to get a picture of her with them.”

On Saturday, hours before post time for the Cotillion, another Grayson foal, I’m a Chatterbox’s yearling half-brother by The Factor, will go through the ring at Keeneland.

“He’s quite the man,” said Gray. “Chit Chatter’s foals are always very competitive, and we had another colt with them, a Mineshaft, and they were always mixing it up. Her foals are consistently athletic and want to run.”

The Grays will watch the colt go through the ring, then get on a plane to Philadelphia to watch his big sister run. In six races this year, I’m a Chatterbox has won three stakes, two of them graded, establishing herself early in the year as one of the top Grade 1 Kentucky Oaks contenders. A third-place finish in the Oaks and those two second-place finishes at Saratoga mean that she hasn’t been out of the money since the Golden Rod last November.

“She loves her job,” said Gray. “She gives it her best every time she goes out on the track.”

“We couldn’t be more proud of how hard she tries,” she continued. “She’s game, she has the heart, and she’s obviously athletic. She’s just got the passion and the desire for racing.”

Gray and her husband tried twice to sell I’m a Chatterbox, once as a yearling, once as a two-year-old. An RNA as a yearling in 2013, she was withdrawn from a two-year-old sale because of what Gray called “a slight blemish.” And though they’ve bred champions in the past–Left Bank, the champion older horse in 2002, and Stardom Bound, champion juvenile filly and Breeders’ Cup Juvenile Fillies winner in 2008, both co-bred with John Youngblood—and they are business people, primarily breeding to sell, the affection Gray feels for her filly is undeniable.

It’s an affection that makes pragmatic decisions about her future difficult to contemplate.

As long she shows that fire and that passion for running, the Grays will keep her on the track, and running her as a four-year-old isn’t out of the question. But at some point down the road, they will likely make the decision to stay good-bye to her.

“I’m fairly sure that she will be a broodmare for someone else,” Gray said, slowly. “I’d love to keep her, but it’s kind of the same way we felt about My White Corvette. We hated to sell her, but we probably can’t afford to keep her.”

“I’m a Chatterbox is going have a value that we probably don’t need to take a risk on,” she said. “But we’re so glad to have produced her, and we think that she’s going to be a wonderful mare. She’s just a sweetheart, and she’ll be a good mama, just like her mama.”

The shock and the pain of losing her own mother still fresh, Gray paused several times as she talked, her voice catching, her emotions, both sadness and gratitude, at times overcoming her.

“There’s never a right time to lose a parent,” she said. “I just wasn’t prepared for it. This morning, I broke down and cried as we left, because she always said to me when I was leaving, ‘God be with you and bring you home safely.’

“She would be so proud of Chatterbox for being there, and she’ll be watching us and rooting us on.”

Dueling with the sadness is the joy, the joy of memories and of anticipation, and of living in a present that has exceeded their expectations.

With typical humility and self-deprecation, Gray said, “You know those people who talk about their mares and foals and say they’re able to tell which one is the best? I’ve never been able to do that.

“But,” she went on, “We are just thrilled to have her, and it’s such a blessing. We can’t imagine anything more fun than this.”