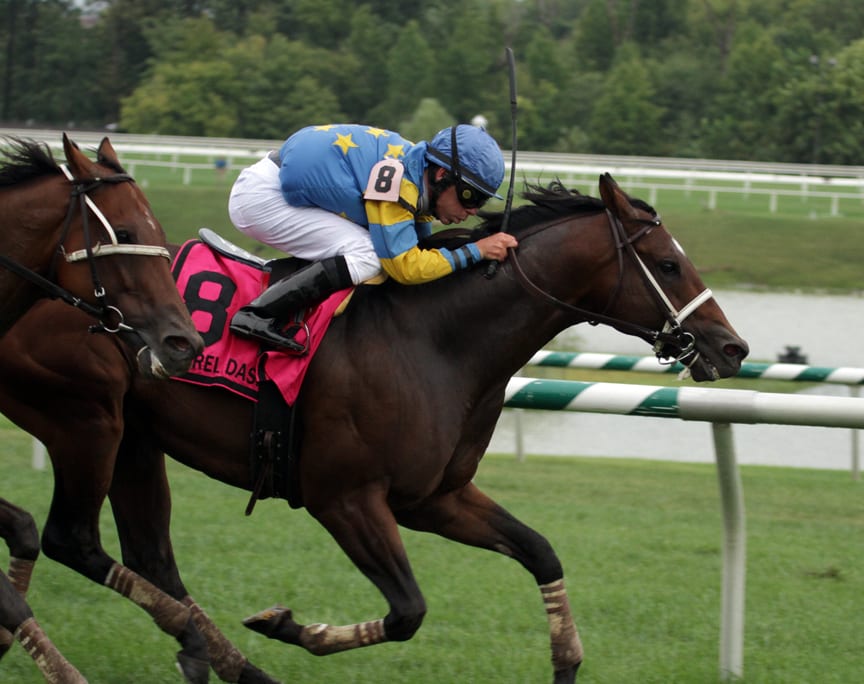 Spring to the Sky held off his rivals to win the Laurel Dash. Photo by Laurie Asseo.

Jockey Mike Luzzi, who recently returned to riding after breaking his leg in two places and his pelvis in five places in November at Aqueduct, guided Anthony McCarthy’s Spring to the Sky gate-to-wire to win the $75,000 Laurel Dash.

The victory was the first for Luzzi since the accident.

“It feels good,” said Luzzi, the Eclipse Award-winning apprentice in 1989 who began his career in Maryland. “There was a time I didn’t know I would ride again, so this is satisfying. Laurel has always been good to me. It is my home track, and I have always done well here.”

A 6-year-old son of Langfuhr who won the Troy and Lucky Coin in 2014, Spring to the Sky, trained by Bruce Brown, broke on top in the 10-horse Dash and never looked back, setting fractions of :23.31, :47.90 and coming home in six furlongs in 1:13.57. Night Officer was a half-length behind in second while A P Elvis finished third.

“I had not ridden this horse before, but I did breeze him in the morning,” Luzzi said. “We wanted to get him to the lead, and I had to hustle him a bit. I knew that I had to save him a little for this long stretch, and somebody ran up to me a little earlier than I hoped, but he was game enough to keep going.”

Night Officer confronted Spring to the Sky in the lane but could never get by.  It was another two lengths and change back to A P Elvis, and favored Oak Bluffs was fourth.

The win pushed Spring to the Sky’s career earnings to nearly $500,000.

“He was in here to win it today,” said Luzzi.