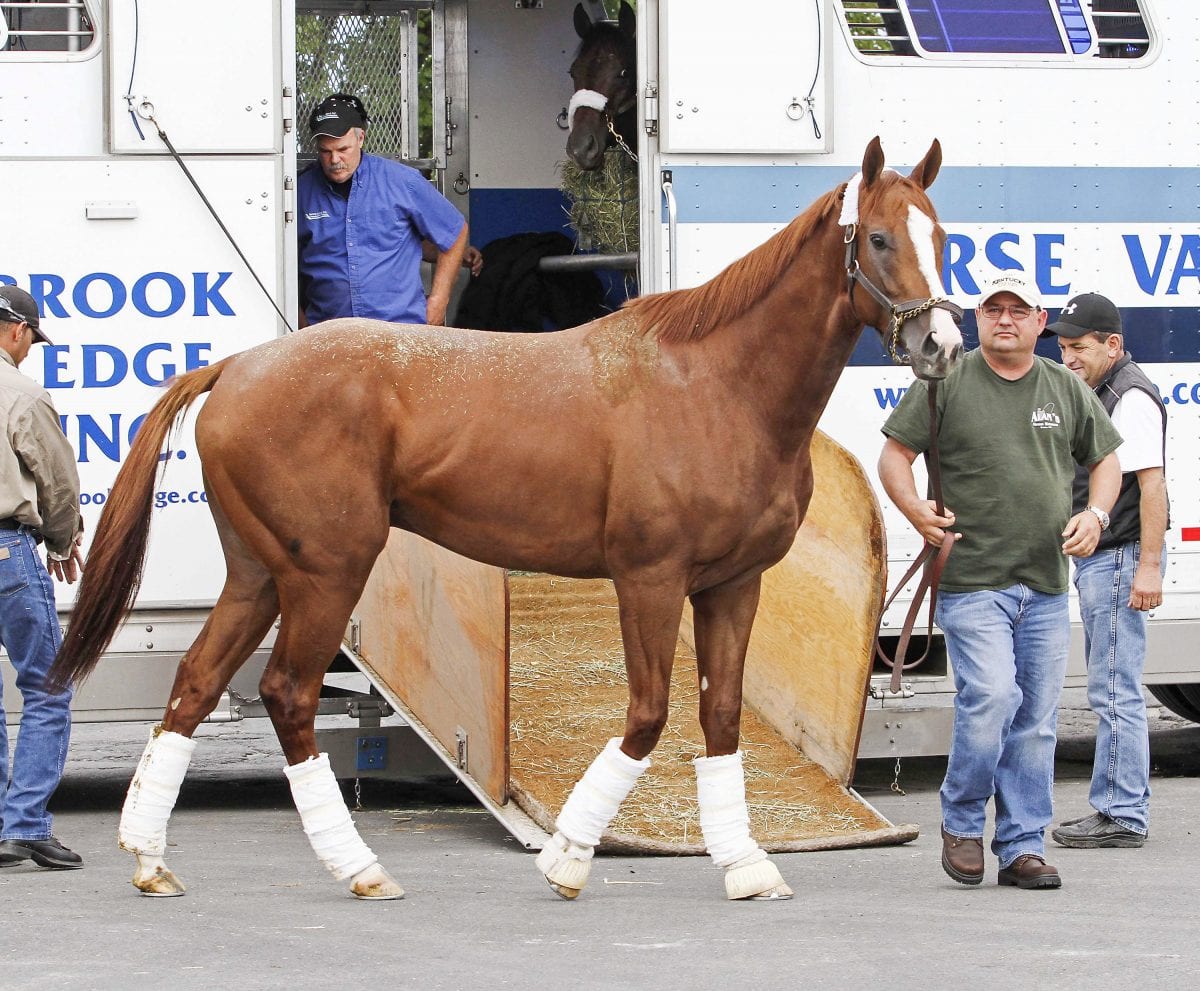 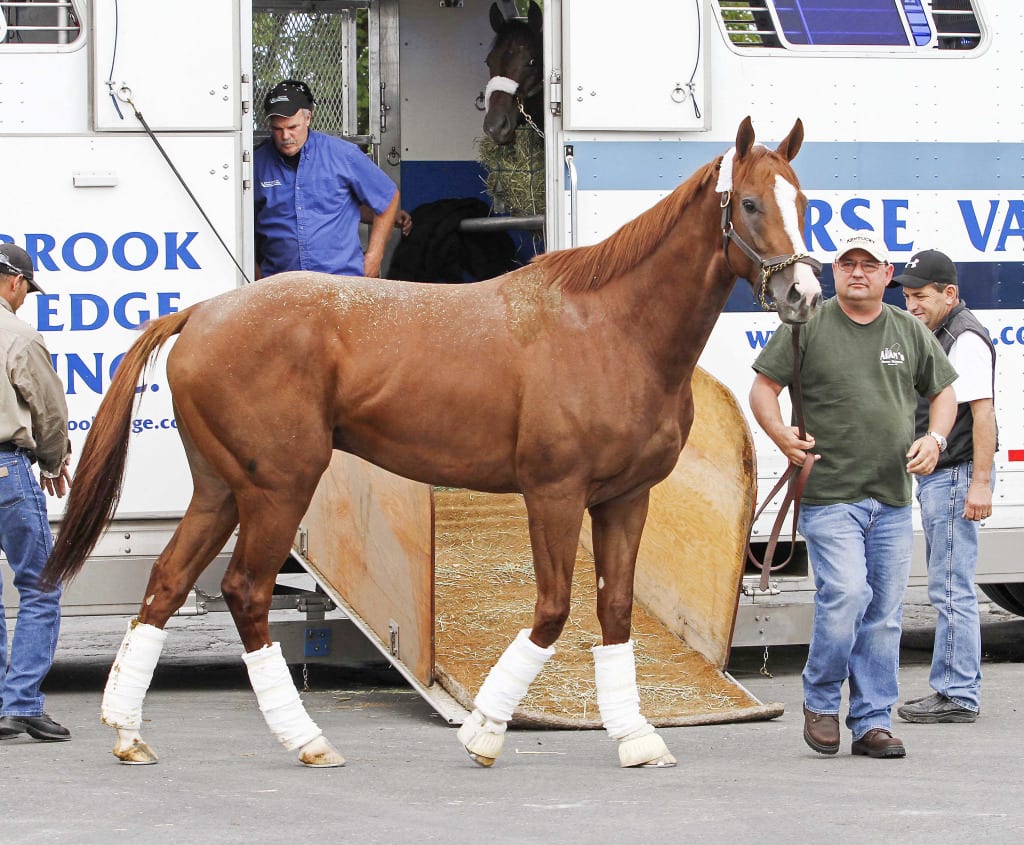 Tracks around the region concerned about how Parx Racing’s Fall Festival will affect their field sizes, and some are taking steps to restrict shipping. Photo By Nikki Sherman/EQUI-PHOTO

As Parx Racing gets ready to present its $20 million “Fall Festival,” which kicks off August 29 and runs through October 20, racing officials at nearby mid-Atlantic venues are casting a wary eye in its direction, concerned about what effect it will have on their entry boxes.

The Bensalem, Pa. track has boosted purses for the two-month period primarily to distribute money that would have been available to horsemen in January and February, which will now be dark. In the first Fall Festival condition book, maiden special weight races carry purses of $84,000, while several allowance events have purses of $88,000 and $86,000. Pots for claiming horses are enormous – $30,000 for open nickel claimers, $52,000 for $25,000 horses that have never won two races, and $60,000 for open $16,000 claimers.

The New York Racing Association has already fired a warning shot to its horsemen, issuing a memorandum August 10 that states any horse leaving NYRA grounds to race at another track will not be allowed to return without the racing secretary’s permission.

“If you desire to support other race meets, we suggest you apply for stalls at that track,” the memo states.

Sal Sinatra, vice president and general manager of the Maryland Jockey Club, has placed a similar message on Laurel’s overnights: “Starting August 28th, you MUST get permission from the racing office to run out of town. The racing office will be the only people able to sign your IN/OUT slips. If the slip are not signed by a racing office personnel, you will not be allowed back in the gate. If you are stabled in Maryland, we expect you to participate in Maryland.”

“I am curious to see how it (the Parx Fall Festival) plays out, but I’m thinking they won’t get the bang for the buck that they are hoping for,” said Sinatra, who previously was the director of racing at Parx.

Though unlikely to feel much heat in the current situation, Charles Town, too, has warned its horsemen in circumstances where it felt its entries might be jeopardized by other tracks.  “Horses running at other race tracks in the absence of the trainer obtaining permission (prior to entry) from the Racing Secretary to run at another track may not be given permission to re-enter stable area for a period of thirty (30) days,” says a note on the overnight, placed there some time ago in response to a situation at Mountaineer (and also relevant given the pending opening of the region’s other bullring, at Timonium).

While Monmouth Park in Oceanport, N. J., about 75 miles east of Parx, will be running weekends only in September, its field sizes are likely to be affected. But no warnings to horsemen have been issued, to date.

“I believe Parx will be successful with its Fall Festival, and in the short-term it will affect our entries,” said Robert J. Kulina, president of Darby Development, which owns and operates Monmouth Park. “We still have a number of big days and stakes scheduled for September, including the N. J. Thoroughbred Festival (September 12). But in the long-term, if it leads to stabilization of the region’s racing calendar, I think it’s a good thing.”

Kulina said that he hoped that Parx’s Fall Festival was a first step in the direction towards consolidation of racing dates and cooperation among tracks in the region.

“If New Jersey and Delaware ran in the summer, and Maryland and Pennsylvania ran in the fall, winter and spring, it would be a great mid-Atlantic product,” said Kulina. “Nobody benefits when we all run in the summer; it puts stress on the horse inventory and you end up offering bettors five and six-horse fields. If you look back to the 1960’s, to the golden age of the sport, shorter meets that didn’t overlap were successful, and it’s past time we went back to it.”

Warnings to horsemen are also not being given out at Delaware Park, about 50 miles south of Parx, despite the Stanton oval’s struggles in recent years to maintain robust field sizes.

“The money that Parx is giving away will make their races much more competitive, and horses will be dropping down from New York,” said John Mooney, Delaware’s director of racing, who said the track will be going to a three-day schedule (Saturday, Monday and Wednesday) in September. “To get that money you have to win, which won’t be easy. We expect our races will fill; our policy has always been that if there isn’t a race for a horse on the grounds, they can ship.”

Penn National and Parx have long held a symbiotic relationship – horsemen at Parx tend to ship cheaper stock to Penn to race, and Penn trainers often ship their better stock to Parx.

“I think in general the expectation for any track that provides free stabling and training accommodations for horsemen is that they will enter races put on by that racetrack, and if races of equal conditions are offered, the horse stabled on the grounds will race at that track,” said Chris McErlean, vice president of racing at Penn National Gaming, Inc. “The racing office obviously has the final discretion in evaluating these situations and tries to strike the right balance, but this is not always perfect, nor is everyone always happy.

(Note: This story was revised on August 27 to clarify the purpose behind the warning on the Charles Town overnight.)