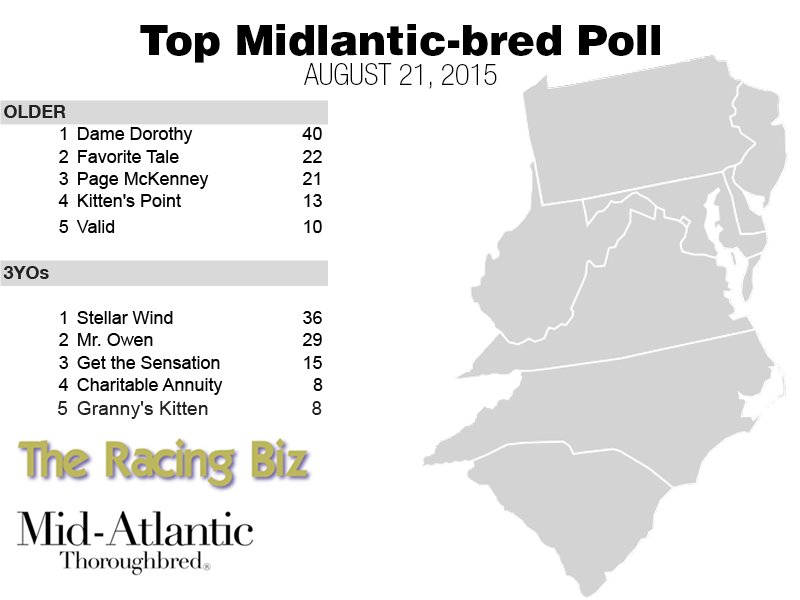 Once again the voters in the Mid-Atlantic Thoroughbred/The Racing Biz Top Midlantic-bred Poll were in strong accord: Dame Dorothy is the top older Midlantic-bred, and Stellar Wind is tops among three-year-olds.

The August poll marks the final one of the season in which three-year-olds are considered separately from their elders.

Bred in Pennsylvania, Dame Dorothy has won three of four this season, among them two graded victories, including one in the Grade 1 Humana Distaff at Churchill Downs.  Similarly, Virginia-bred Stellar Wind has also won three of four, all in graded company, and counts the Grade 1 Santa Anita Oaks as her top victory.

Pennsylvania-bred Favorite Tale leapt up to second among older horses, from fourth, in the newest poll, released today.  The son of Tale of the Cat most recently ran third in the Grade 1 Alfred G. Vanderbilt at Saratoga and has a single win from four starts this season.

Also back on the older horse poll this month is Valid, the Virginia-bred who most recently was second in the Grade 2 Monmouth Cup.  The race was his fourth stakes placing of 2015.

Among the younger set, the list’s only newcomer is Charitable Annuity.  The West Virginia-bred son of Charitable Man most recently won the Robert G. Leavitt over state-breds at Charles Town on August 7.  His rise led to the decline of She’s a Big Winner, who dropped out of the top five.

Pennsylvania-breds dominated the two lists, taking six of the 10 spots, including the top four among older horses.  Virginia-breds and West Virginia-breds each accounted for two of the runners.  Six of the top 10 are males, and four are females.