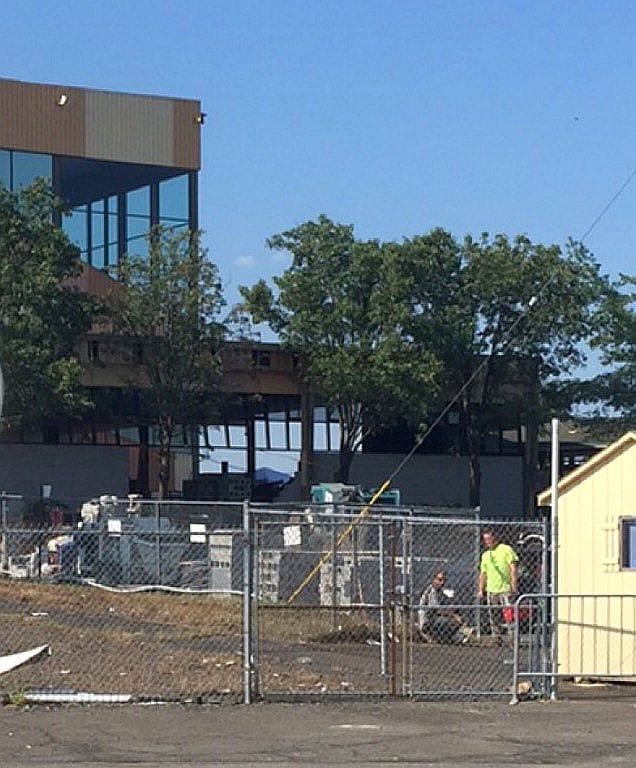 Work underway on the paddock at Parx Racing.

Back in 2004, when legislation was passed that brought slot machines to Pennsylvania, many predicted that revenue from the one-armed bandits would cause purses at Parx Racing to soar into the stratosphere.

“Purses will soon be on a par with those in New York, so you’ll need to upgrade your stock to compete,” the head of the track’s horsemen’s group warned his constituency not long after the ink on Act 71 – the Pennsylvania Race Horse Development and Gaming Act – was dry.

In the last decade, purses did go up, but they never attained the levels in New York. And the trainer’s colony by and large stayed the same on the Bensalem backstretch, as did the quality of their horses.

But beginning August 29, that long-ago prediction by the horsemen’s head about ballooning purses will finally come to fruition, although it’s only because the track is reducing dates next winter and the surplus revenue is being added into the regular purse distribution.

Regardless, on August 29, Parx kicks off its “Fall Festival,” with purses on a similar level with those at the current Saratoga meet. The Fall Festival runs from August 29 through October 20.

A peek at the Festival’s opening day races in the new Parx condition book tells the story. Christened “Smarty Jones Day” because the running of the Gr. 3, $300,000 Smarty Jones Stakes for 3-year-olds will be contested, maiden special weight races carry purses of $84,000, compared with Saratoga’s maiden special weights, which are $83,000 for open company.

Several allowance events in the book have purses of $88,000 and $86,000, respectively, comparable with Saratoga’s allowances. Perhaps even more startling, however, are the pots available for claiming horses, among them $30,000 for open nickel claimers, $52,000 for $25,000 horses that have never won two races, and $60,000 for open $16,000 claimers.  All of that suggests that trainers will hit the claim box hard, and try to start those horses as many times as they can during the two-month span of inflated purses.

When the Parx horsemen’s group announced it had struck a three-year deal with management to reduce the number of live racing dates to 156 beginning in 2016, and which is believed to be tied to Senate Bill 900, which allows racinos to reduce dates to 100 while also legalizing internet gambling and the expansion of slot machines at non-racetrack facilities, more than $4 million in improvements to the circa 1974 racetrack was agreed upon.

The first of those improvements is currently underway. During the first week in August, a complete rehab of the paddock and walking ring commenced, forcing horses to be saddled on the turf course for the cards of August 8-11. Live racing has also been curtailed until August 29, and training has been cancelled the last few days.

According to director of racing Sam Elliott, work on the paddock area is long overdue.

“We’ve taken all of the wooden stalls out – they dated to when the track first opened – and replaced them with cinderblocks padded with rubber four feet high,” said Elliott. “We’ve taken out the mulch footing in the paddock, walking ring and winner’s circle and replaced it with rubber pavers. The roof over the paddock is fairly new, so that’s the only thing that won’t be replaced.”

Elliott said that the cost for this work is more than $600,000, and is far ahead of schedule, ensuring its completion for August 29. He said that such a project is testament to management’s interest in improving its racing facility, not just the casino, as many people allege.

At a New York Racing Association Board meeting August 12, board member Len Riggio said he was “extremely concerned” about “pressure from Parx” and its inflated purses during the Fall Festival, which could hurt entries at the tail-end of the Saratoga meet and the first eight weeks of the Belmont Park fall meet.

To that end, in the run-up to Parx’s Fall Festival, the New York Racing Association issued a memorandum to its horsemen August 10 that states any horse leaving NYRA grounds to race at another track will not be allowed to return without the racing secretary’s permission.

“If you desire to support other race meets, we suggest you apply for stalls at that track,” the memo states.

“I don’t think it will affect our entries,” said Elliott, when asked about NYRA’s memo. “Actually, our guys will be helping to fill their races in January and February.”

Longtime trainer Ron Glorioso, who has been stabled at Parx since it opened in 1974 under the banner Keystone Racetrack, said that winning one or two races during the Fall Festival “can make your year.”

“I just hope I have enough stock to compete,” said Glorioso. “One thing I can say is that the racetrack is in tremendous shape and when the paddock is done it’s going to look great.”