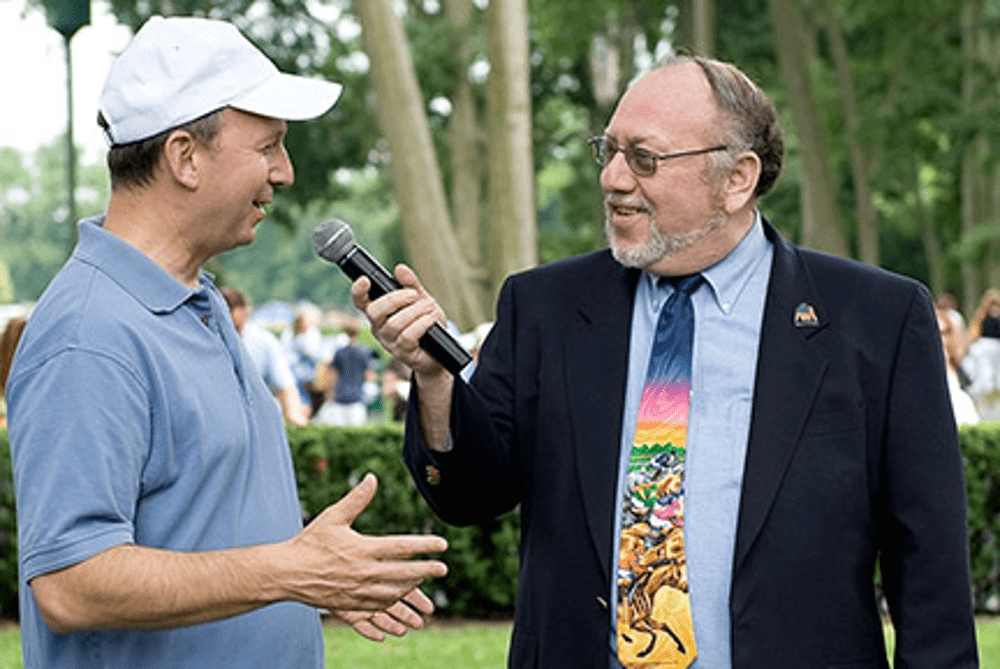 Portly, bespectacled and with a graying beard, he will never be confused with a movie star. But to horseplayers throughout the mid-Atlantic region, Rich Glazier is nevertheless a celebrity. To put it simply, Rich Glazier IS Mr. Delaware Park.

Since 1987 Glazier has been the host of the nightly replay show from the track and in more recent years has been the paddock racing expert. It’s a labor of love for Glazier who is an unabashed fan of racing and of Delaware Park. He admits he was just a horseplayer who fell into the job that has lasted almost three decades.

“I used to work in the accounting department of a large company and I would work hard all morning to clear my workload so I could have time to read the Daily Racing Form I had hidden under the spread sheets,” Glazier recalled recently. “In those days Mike Walsh, who later became the sheriff of Newcastle County, was the host of the TV show but one night he couldn’t do the show and asked if I could fill in. Apparently, the fans who watched that night liked the fact I showed all the races and talked about them, because not long after Vince Francia, the publicity head at the track, asked if I would like to do the show on a regular basis. I used to go to my day job then rush to Delaware Park in time to do the show at night. Then after a while I signed on full time with the track.”

Glazier’s paddock presentations differ a bit from other “talking heads” in that he doesn’t make selections, preferring instead to point out facts about each horse that may help the fan make his or her selections.

“I’ve noticed as I walk around the track that a very small percentage of fans have a Form in their hands. Many tear out the selections from the newspaper,” he pointed out. “So what I try to do with the fans here and those who are listening at the simulcast outlets is give them facts and figures on each horse that relate to Delaware Park, like their record over the local strip. I also try to point out trainers who are winning at a high percentage or stables and riders that may have been hot in recent weeks. Those are things the guys in an OTB in Illinois or Arizona wouldn’t know.”

Those who are familiar with Glazier’s comments will recognize his comments about “circle” horses. Circle horses are horses whose pedigrees trace back to the Northern Dancer bloodline, a strain that Glazier has found produces successful turf runners down through the years.

“I first realized the importance of breeding for horses racing on the turf when Poker beat the great Buckpasser, whom I was a big fan of,” Glazier explained. “After the race Charles Hatton, the legendary writer for the Daily Racing Form, pointed out that the result of the race shouldn’t have been that shocking if one had looked at the two horses’s bloodlines, bloodlines that revealed Poker had a pedigree that was markedly superior to Buckpasser’s on the turf. So I began to study the great turf bloodlines of the business. While some of those, like Round Table, Herbager, T.V. Lark and others, have faded from time, the Northern Dancer line is still strong with sires like Storm Cat and others. Following and betting on horses with the Northern Dancer influence in their pedigrees has proven to be very profitable personally, and I try to pass that information to the fan when I can. Of course it’s their choice whether they ‘follow the circles’ or not, but they have the information if they choose to.”

And what sets Glazier apart from the norm is that he is wholly dedicated to the fans, especially those at Delaware Park. While a lot of the talking heads in the sport spend their afternoon in the press box or T.V. studio, Glazier strolls the grounds, stopping every few feet to speak with fans.

“I get all kinds of feedback,” said Glazier, “and since racing fans are by nature a cryptic group, a good bit of that feedback comes as complaints of one kind or another. One day a guy came up to me and said he wanted to know why the toilet paper in the bathroom didn’t unroll over the top instead of the bottom. You just never know what a horseplayer will come up with.”

Glazier has had some physical issues of late and was hospitalized for almost a month this winter. He says he’s been forced to cut back on his walking around the track, something he regrets, but he still finds time to talk to the fans. And those who watch the Delaware replay show know Glazier takes a lighthearted, humorous approach to racing whenever possible.

“You know, betting on horses can be an emotional roller coaster, the tough beats, the lost photos, the DQs. A day at the races involves a lot of ups and down so I try to inject some humor whenever possible. Life’s too short not to have some fun.”

Rich Glazier traded his calculator for a microphone some 28 years ago, and accounting’s loss was most definitely Delaware Park’s gain. There are numerous “voices” of tracks throughout the business, but the heart and soul of this storied track is Rich Glazier.