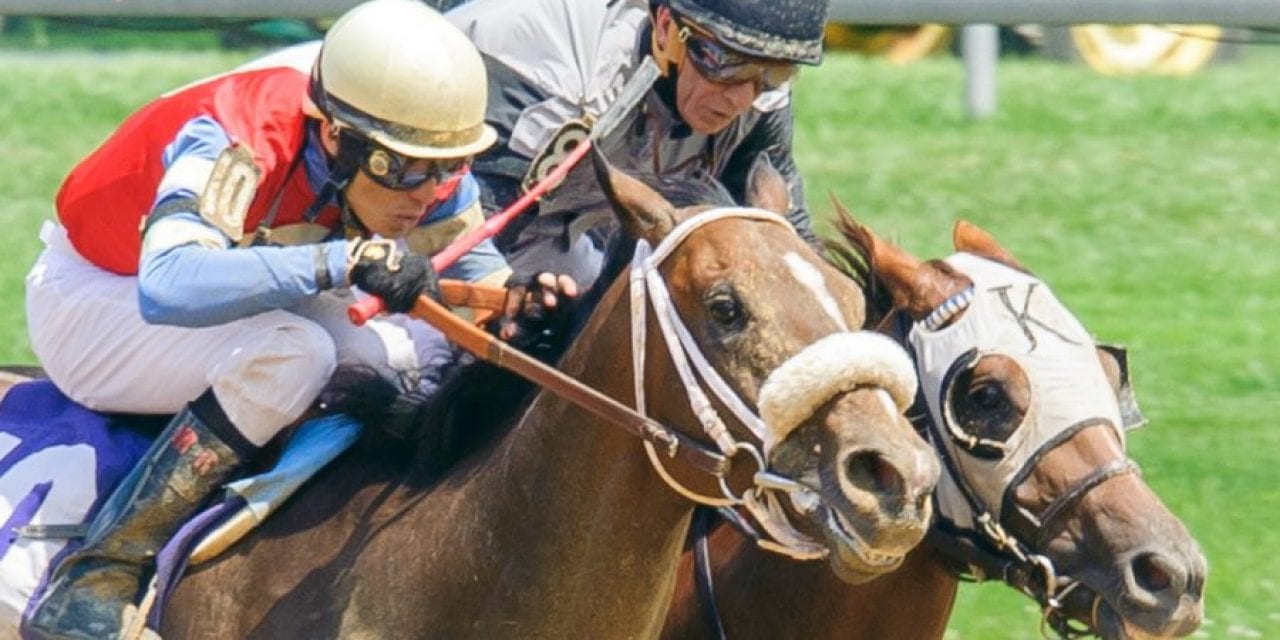 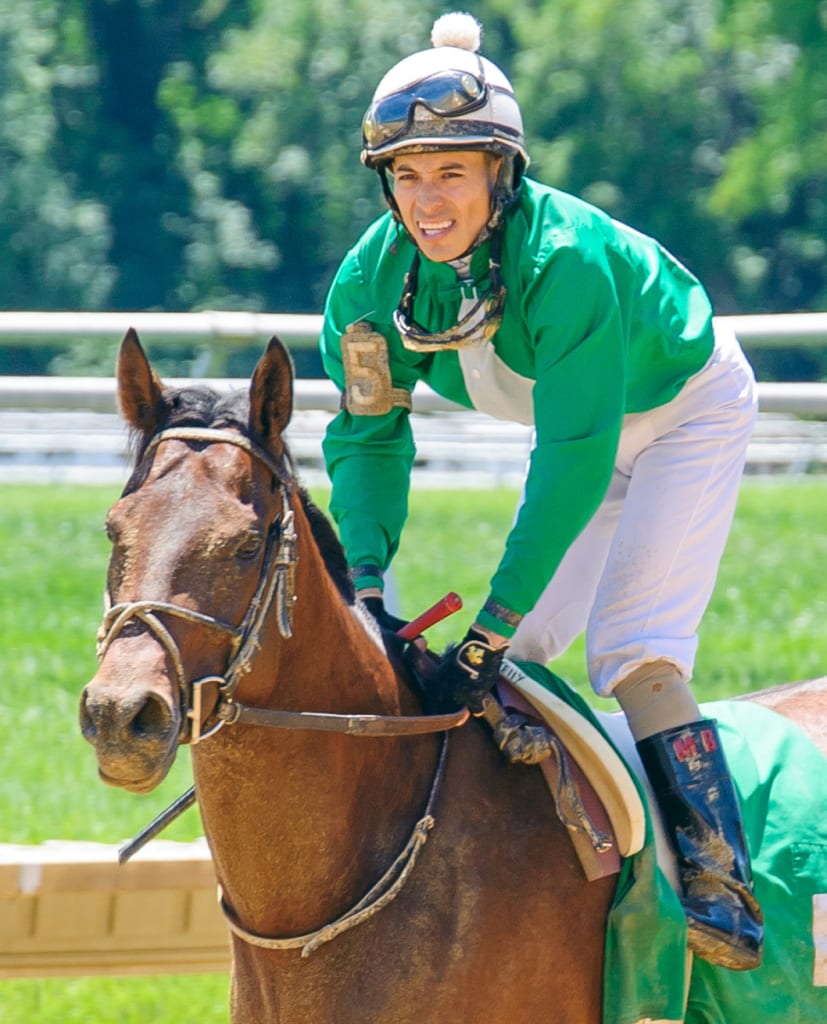 Delaware Park has been a stepping stone to stardom for a number of young riders through the years. Stars like Chris McCarron, Jeremy Rose and more recently Victor Carrasco have honed their craft and attracted national attention while riding here during their apprenticeships, attention that’s helped launch successful careers.

Mario Rodriguez, who leads all apprentice riders at the current meeting with 16 victories, has hopes of following that same path to success.  If determination has anything to do with it, his chances for stardom are good, indeed.

Rodriguez left his home in Oaxaca, Mexico eight years ago and headed north, searching for a better life. The poverty level in his home town in the mountains several hundred miles inland from Acapulco was high, and the young man was desperate to find work to help himself and his family. His travels took him over 1,700 miles to Hot Springs, Arkansas.

“I had heard you could find work at the race track,” the 28-year-old rider recalled.  “I was willing to do anything to earn some money to send back home. I didn’t know much about race horses but I was willing to learn and work hard. I was lucky to work for Mac (Maclean) Robertson and then D Wayne Lukas. After a while I started getting on horses. I was lucky enough to get on some really nice ones, including Take Charge Brandi who won the Breeders’ Cup Juvenile Fillies last year.”

Rodriguez began his riding career in 2014.  But he rode sparingly at Lone Star Park and the North Dakoka Horse Park, as well as Oaklawn this winter, getting off to a sluggish start.

It wasn’t the best way to begin a career, and Rodriguez rode a lot of races on horses with little or no chance to win. “Oaklawn is a tough place for a new rider, especially an apprentice,” explained Mario Flowers, Rodriguez’s agent, “and basically the first six months or so of his apprenticeship was wasted.”

The rider came to Delaware having won just five times.  But he has come to life this meeting, winning races and displaying improved poise and strength with his mounts. Through Wednesday’s program Rodriguez has won 16 races from 119 mounts to rank sixth in the rider’s standings. Rodriguez says he’s still learning and making mistakes, but he feels he can continue to improve with time.

“I’ve learned a lot since coming here. Watching and riding with good riders has helped me a lot,” the jockey said. “And now I’m able to help my family back home which makes me feel good.” 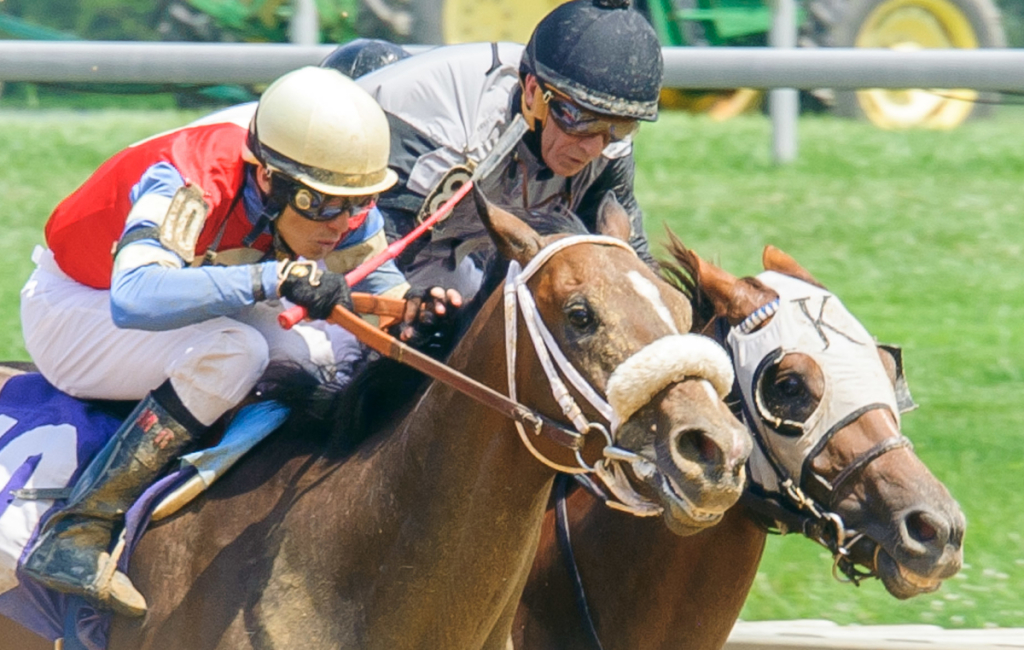 If you’re the type of handicapper who is on the lookout for maidens with strong pedigrees, you should pay close attention to the maiden special weight races at Delaware Park.

Take Wednesday’s fifth and seventh races for instance. The pair of seven and a half furlong turf tests for fillies and mares drew several entrants with some eye-catching bloodlines. Bibby, whose mother was a stakes winner who earned $396,000, won the fifth while Social Call, a half-sister to graded stakes winner and $431,000 earner Old Time Hockey, ran second. Also in the field were English Belle, a half sister to $2,000,000 earner Toast of New York, who won the U.A.E. Derby and finished second in the 2014 Breeders’ Cup Classic, and Sweet Chant, a half-sister to Campanologist, a Grade I winner in Europe and earner of $1,600,000.

The seventh was won by For Finery, whose mother was a Grade III winner on the turf and earner of over $363,000. Finishing a fast closing third was Promotional, a half sister to Marketing Mix. Marketing Mix won 10 races and was a Grade I stakes winner who earned more than two million. Also in the field was Tap Shoes, a half sister to Winchester, a grade I winner of more than 1.6 million.

And a few weeks back, Barbaro’s half brother finished second in a similar turf race.  If you’re looking for horses with pedigree and promise you would be well advised to research maiden special weight races at Delaware Park.