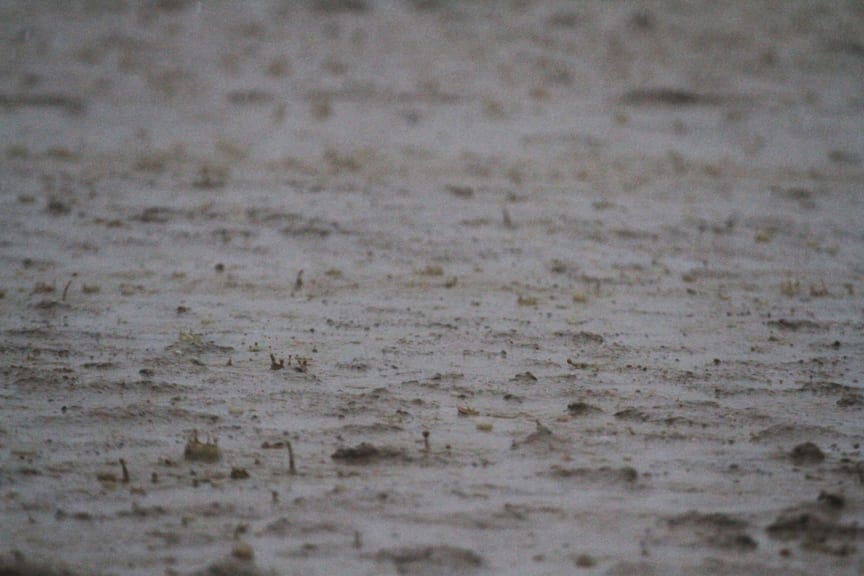 Weather can pose the greatest challenge to maintaining a dirt course. Photo by Laurie Asseo.


When a racetrack experiences a spate of breakdowns, such as the ones at Del Mar in 2006 and 2014, at Aqueduct in 2012-2013 and this past winter, and at Laurel Park in 2013, people often point fingers at the track surface. In the face of distressing and at times inexplicable equine deaths, there can appear to be one common denominator: the surface over which the horses are running.

For better or worse, determining the cause of equine breakdowns is seldom that easy. Breakdowns don’t generally happen in the same area of the track, and the number of variables to investigate—the distance and type of race, a horse’s injury and racing history—can make it frustratingly difficult to pinpoint why a particular horse broke down on a particular track on a given day.

Dr. Mick Peterson is doing his best to try to eliminate at least one, and perhaps the most obvious, of those variables.

The executive director of the Racing Surfaces Testing Laboratory at the University of Maine, where he is also a Libra Foundation Professor, Peterson has been studying racetrack surfaces for nearly 10 years. For him, the issue isn’t whether horses race on turf, dirt, or synthetics. The issue is how consistent those surfaces are.

At the sixth Grayson-Jockey Club Welfare and Safety of the Racehorse Summit on July 8 at Keeneland Racecourse in Lexington, Kentucky, Peterson presented an overview of his work, then moderated a discussion on the maintenance of track surfaces at Churchill Downs, The Thoroughbred Center in Lexington, and the three tracks on the New York Racing Association circuit.

Posing questions to Glen Kozak, the vice president of facilities and racing surfaces at NYRA; Jim Pendergest, general manager of The Thoroughbred Center; and Jamie Richardson, Churchill Downs’s track superintendent, Peterson set the tone for the conversation by stating that he believed that the track superintendents’ job goes far beyond simply maintaining the racing surfaces.

Both Kozak and Richardson previously worked for the Maryland Jockey Club.

“I look at it,” Peterson said, “as the job of the track supervisor to reduce musculo-skeletal injuries in horses.

And key to that goal, he said, is data, which is where his track maintenance program comes in.

Likening the program to a pre-take-off check list for an airline, Peterson stressed the importance of regularly collecting data on the racing surface, then using that data to increase its consistency, thereby reducing the likelihood of equine injury.

Challenging that consistency is weather, which Kozak and Pendergest have to deal with year-round, and the expectations of trainers, not all of whom agree on the ideal track surface.

Kozak has the benefit—or the curse—of working with 11 surfaces: four at Saratoga (Oklahoma training track, Saratoga main track, and two turf courses); four at Belmont (training track, main track, two turf courses); and three at Aqueduct (main, inner, turf). With at least two tracks open for training for most of the year, and all three open for several months, the variety permits NYRA to create surfaces suited for the seasons, with limestone bases at the tracks used in the winter and clay at those used in more moderate temperatures.

Peterson has consulted with NYRA for the last several years, implementing a program of regular data collection that includes using ground penetrating radar to measure the track cushion and monitoring how much moisture a track has absorbed through precipitation or watering, then measuring how different points on the track have responded to that moisture.

At the lab in Maine, Peterson and his colleague Dr. Christie Mahaffey also test samples of track surfaces using a biomechanical surface tester, which replicates and measures how a horse’s hoof impacts the surface at a gallop. Santa Anita, Del Mar, Canterbury, Arlington Park, Keeneland, and Churchill Downs are also using Peterson’s program.

In New York, Kozak works with Dr. Scott Palmer, New York State’s equine medical director, and NYRA vet Dr. Anthony Verderosa to review every breakdown, noting where it took place, the weather conditions, and how the track was maintained that day.

Often, said Peterson, the data will reveal that the track was no different on the day of a breakdown than it was on a day when all the horses and jockeys came home safely.

“It’s important,” he said, “not to make changes [to the track] off of one incident.”

Noting that injury rates on dirt track can vary from year to year while those rates on synthetic have remained consistently low, Peterson’s presentation emphasized the importance of weather variability, suggesting that it is the main challenge to consistent dirt and turf surfaces, and thus to safety.

“Some years are bad,” a slide in his presentation acknowledged. By compiling data and using it to make adjustments to track surfaces, racetracks can, he wrote, “make every year a good year.”