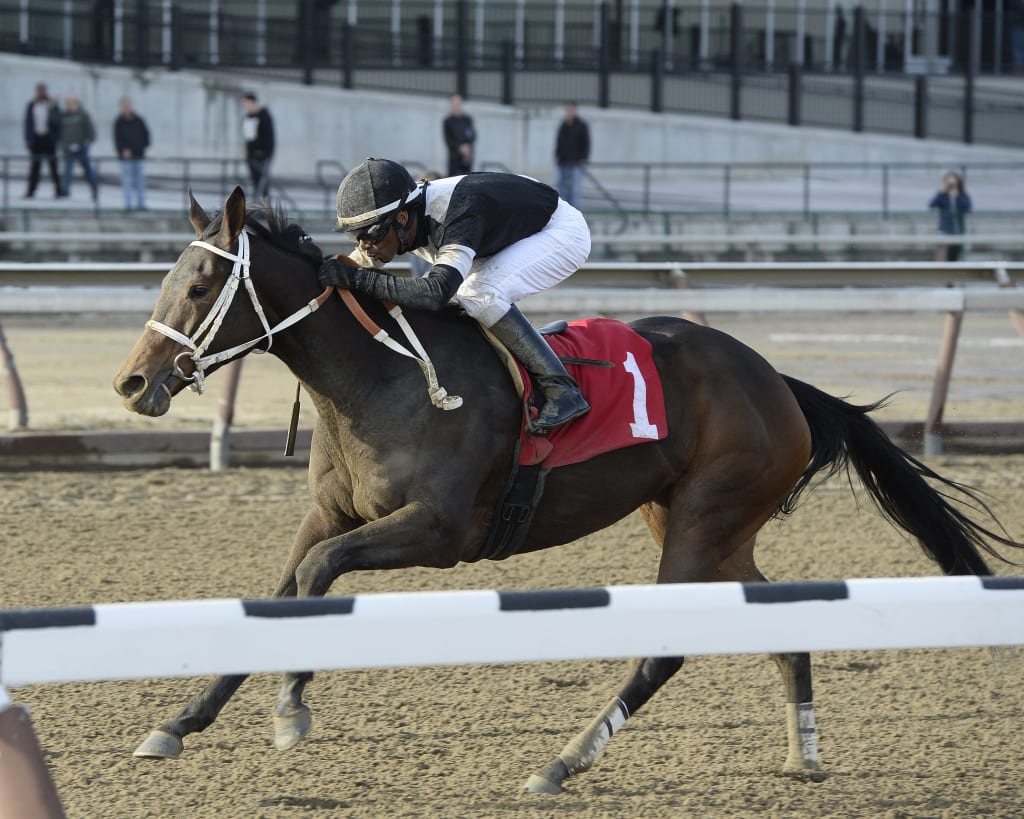 Joint Return in the 2014 Busher. Photo by Joe Labozzetta, NYRA.

Local trainers have strong entrants in the $750,000 Grade I Delaware Handicap on Saturday at Delaware Park.

Trainer H. Graham Motion has entered Fortune Pearl in the mile and a quarter summer classic for fillies and mares. Trainer John Servis has entered Joint Return.  Both fillies used the Grade III Obeah Stakes, as the prep.

RMJ Stables Fortune Pearl finished fourth in the Obeah Stakes after finishing unplaced in Grade III duPont Distaff at Pimlico on May 15.  In her only other outing this year, the 4-year-old daughter of Mineshaft posted a half length triumph in a mile and a sixteenth allowance at Keeenland on April 4.  Last year, the Kentucky-bred won the Grade II Delaware Oaks, finished second in the Grade II Black-Eyed Susan at Pimlico, and fourth in the mile and a quarter Alabama Stakes at Saratoga.  She has a career record of four wins, two seconds and a third from 11 starts with earnings of $346,947.

“Fortune Pearl should get better with the distance,” Motion said.  “Last year, she ran well in the Alabama. She also came out running well at Keeneland in April, but her last couple of races have been disappointing.  But the Obeah was a little bit of an odd race, so maybe the race did not suit her that day.”

“This has always been a weekend our barn prepares for and looks forward to,” Motion said.  “It would certainly be nice to win the Delaware Handicap again, especially since the race has regained its stature as being one of the important in the division.  Any time you can compete in a Grade I prestigious race in your own backyard, it is something special.”

John Servis has entered Main Line Racing Stable’s Joint Return although she has not won a race in three attempts this year. Her primary target has been the Delaware Handicap.  In her most recent, the 4-year-old daughter of Include finished second in the Obeah Stakes after her trainer John Servis decided to make a slight adjustment in tactics with this race in mind.

“We were actually using the Obeah as an experiment to see if we sat longer if she would finish better,” said trainer John Servis.  “In her last few, I felt like she made a big move and did not sustain the rally.  She would just kind of hang out there at the end.  So we asked Kendrick (Carmouche) to sit just a little longer and she was certainly running at the end.  She was full of run and I was very happy.  She is doing great coming into the race, so we are pretty excited.”

Earlier in the season, Joint Return finished third in the Grade III duPont Distaff at Pimlico on May 15 and fourth in the Grade III Top Flight at Aqueduct on April 11.  Last year, she won the $50,000 Our Mims Stakes at Delaware Park and the Calder Oaks.  The Kentucky-bred has a record of five wins, three seconds and two thirds from 14 starts with earnings of $463,154.

Perhaps the horse to beat is Florida shipper Harold Queen’s Sheer Drama.  In her last, the 5-year-old daughter of Burning Roma finished second in the Grade II Fleur de Lis at Churchill Downs on June 13.  Previously, the Florida-bred trained by David Fawkes finished second in the Grade I La Troienne Stakes at Chuchill Downs on May 1.  On March 21, she won the Grade II Royal Delta at Gulfstream Park.  She has a career record of four wins, eighth seconds and a third from 17 starts with earnings of $468,840.

“The Delaware Handicap has been a target race for us,” said trainer David Fawkes.  “We have been wanting to run this filly a little further and she has a high cruising speed, so Mr. Queen (Harold) and I have had this race in mind for some time now.  But this has been a primary target as part of her 2015 campaign.”

Fawkes has noticed that with a change in temperament has come improvement for Sheer Drama.

“She has not always been the easiest horse to work with in terms of shipping and working around the barn, but for some reason,  she has gotten really comfortable doing those things this year,” said trainer David Fawkes.  “I really cannot explain it.  She is just as happy as a clam in the trailer and eats her dinner.  Now, she will do whatever you ask her to do.  She has matured and her training has improved.  She has been one of the more consistent fillies I have trained.  I wish she would have more wins than seconds, but it is what is.  She is very consistent and she always gives you what she can.”