Ben’s Cat among many familiar faces in Parx Dash 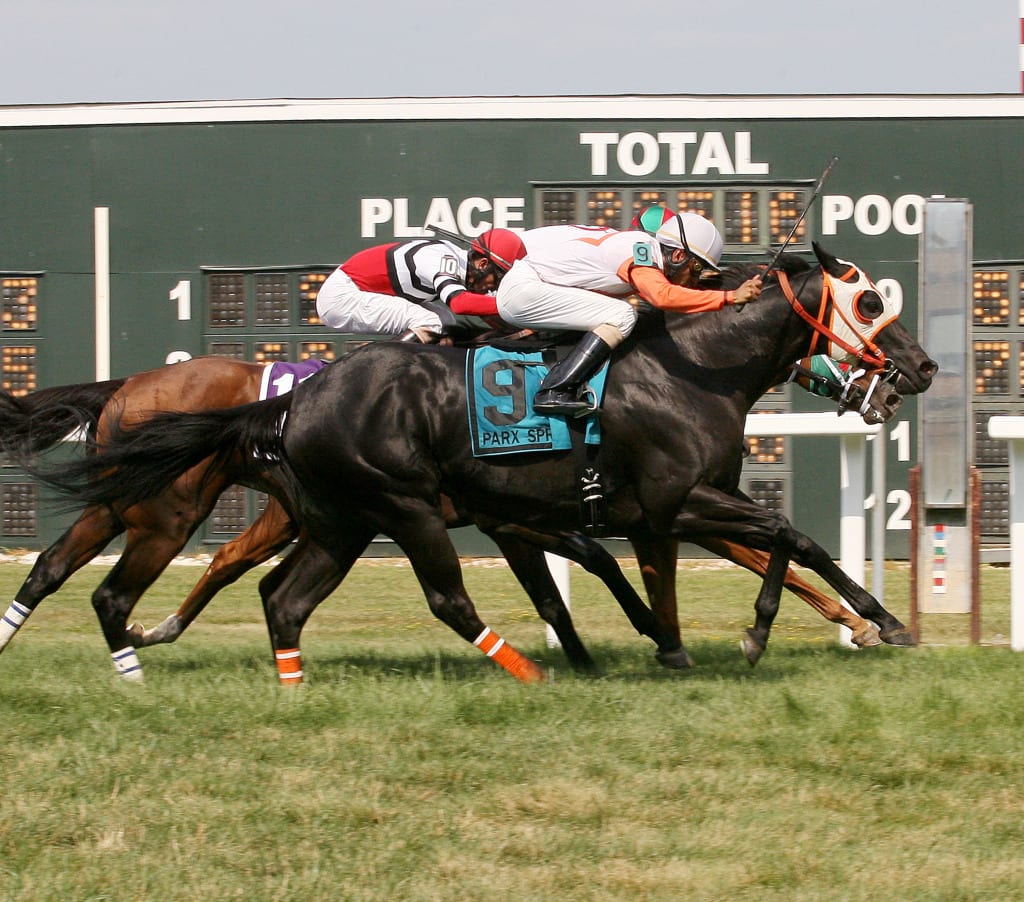 Ben’s Cat was up late to win the 2014 Parx Dash over Tightend Touchdown (along the inside). Photo By Barbara Weidl / EQUI-PHOTO

Has Tightend Touchdown, the runner-up in the 2013 Breeders’ Cup Turf Sprint, finally begun to slow down at age six?

That’s a question that — though it may in part be answered — no one will be asking heading into Saturday’s Grade 3 Parx Dash.  And that’s because the race’s “old man” space will be taken up by the seemingly ageless Ben’s Cat, the nine-year-old who will be seeking his fourth consecutive Parx Dash triumph.

Ben’s Cat — bred, owned and trained by Hall of Fame inductee-to-be King Leatherbury, himself surprisingly resistant to the effects of age — will also be aiming for the 30th victory of a splendid career that has seen him amass more than $2.4 million.  It will be his fourth start of 2015, his ledger including a win (in the Jim McKay Turf Sprint at Pimlico), a second in the Pennsylvania Governor’s Cup at Penn National, and a second to start the season in allowance company.

While Ben’s Cat has finished one-two in all three of his races this year, Tightend Touchdown hasn’t hit the board in two starts, running fifth in the Grade 3 Shakertown at Keeneland in April and ninth in the seven-furlong Elusive Quality at Belmont last month.  His most recent victory came in the May, 2014 Pennsylvania Governor’s Cup at Penn National.

A year ago, Ben’s Cat and jockey Julian Pimentel mounted a furious late rally to run down Tightend Touchdown in the last jumps and win by a nose.  It was the second consecutive year the pair had run one-two in the Dash and, in fact, their sixth meeting overall.  Ben’s Cat has finished ahead of his rival in four of their six meetings, winning three to Touchdown’s one.

But these two won’t be the only familiar rivals.  In fact, for Ben’s Cat, who will once again be ridden by Pimentel, the race might seem like a reunion of sorts.

The robust field of 11 also includes Stormofthecentury, who scored a 28-1 win, beating both Tightend Touchdown and Ben’s Cat, in the 2013 Turf Monster over the strip  but has labored to find that form since; and talented Power Alert, the Australian-bred who’s won all three of his North American starts at five furlongs, including Churchill Downs’s Grade 3 Turf Sprint.

The Parx Dash will be Saturday’s eighth race, with a 4:04 post time.