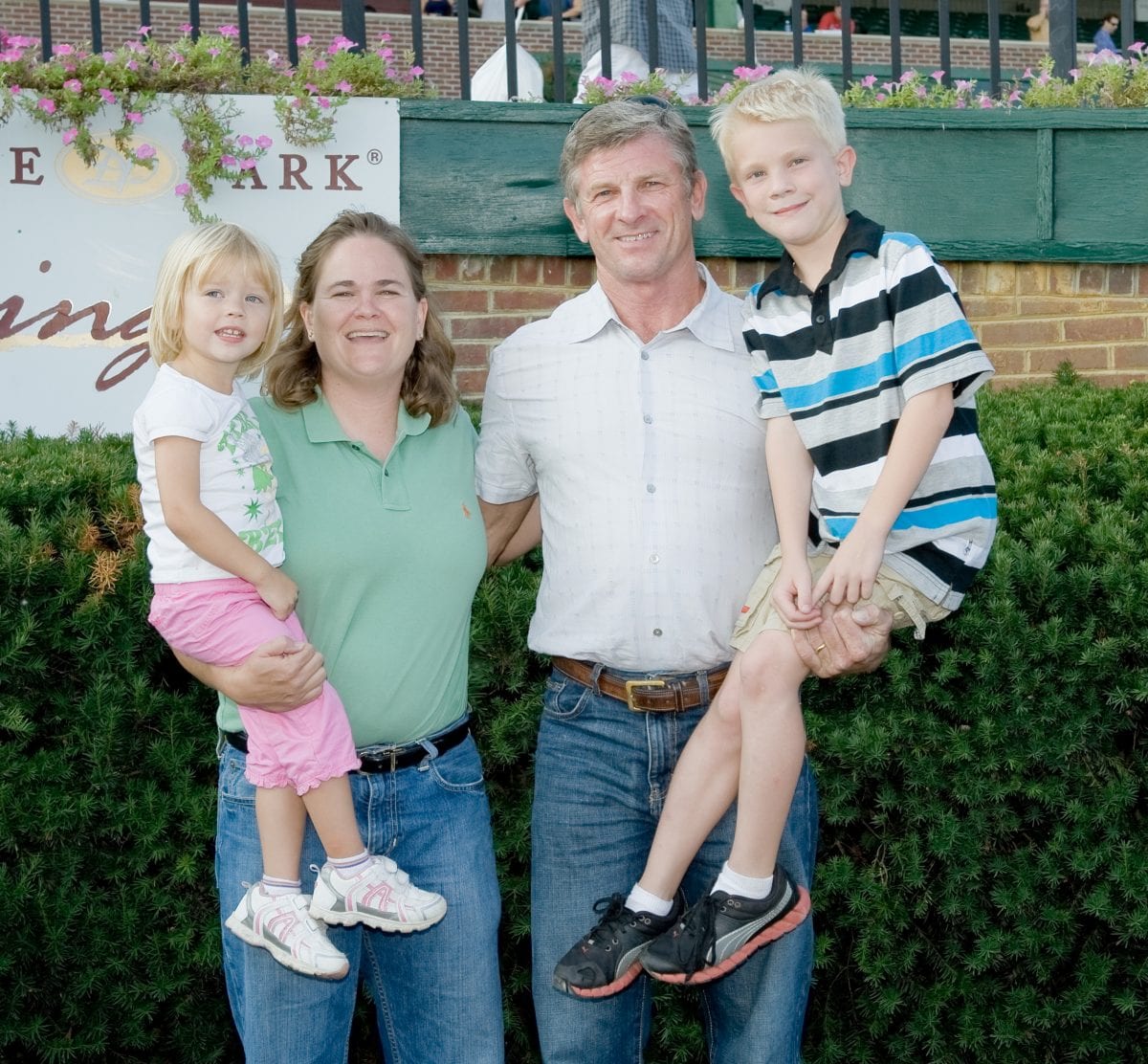 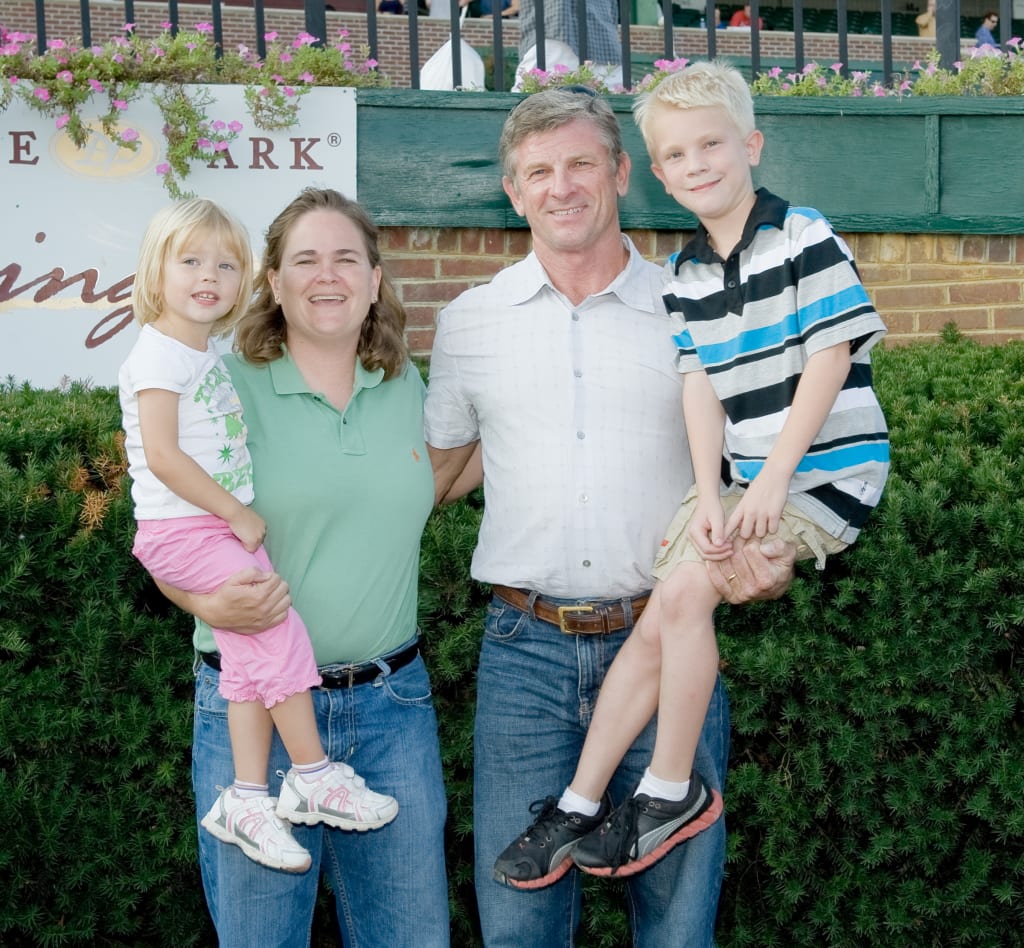 All in the family: Keeley, Tracy Randy and Taven Nunley in 2012. Photo by HoofprintsInc.com

Porter Racing has been an integral part of the Delaware racing scene for almost forty years. When John Porter retired from the Hernando County Florida School System he switched his focus to breeding and racing thoroughbreds. He purchased what would become Porter Farm.

And more importantly for Delaware Park, Porter began running horses at Delaware Park in 1976.  Over the past 39 years the green, white, and black Porter colors have been as synonymous to Delaware Park as the giant oaks in the walking ring or the tree-covered picnic grove just off the clubhouse turn. Porter was one of the driving forces behind the implementation of the Delaware Certified Program that benefits horses bred and owned by those who support Delaware racing.

This spring, just a week after the 2015 Kentucky Derby, John Porter passed away at age 78. His passing was a big loss for the Delaware racing community and some have wondered what course the Porter stable will take for the future.

Randy Nunley came to Delaware Park in 1996, met John Porter’s daughter Tracy, and not long after that, the couple married. They’ve been married 16 years and for most of that time have run the racing end of the Porter operation. With dad dealing with the breeding and early development on the farm, the Nunleys have raced the Porter runners with a fair amount of success. The stable earned almost a million dollars in earnings in 2008, and with Nunley guiding the horses, Porter Farm was the leading owner in 2011 at Delaware Park.

But what does the future hold for Porter Racing?

“It’s not going to be the same with John gone, that’s for sure,” Randy Nunley admitted recently, “but John wanted us to continue to race the stable and that’s what we’re going to do. I spent most of the winter on the farm, breaking the yearlings and preparing the rest of the stable for the summer. The weather up north was rough, so being able to train regularly and having warm weather was good for the horses.

“Tracy and Carole (Porter’s wife) are going to be dealing with the business end of the operation, and we plan on doing some trimming in some areas. We’re cutting back from 10 broodmares to 5 and we already had begun to downsize the size of the racing stable. The economics of the business are such that such that a big stable is just too hard to support. But we’re not the only people cutting back. It’s getting tougher and tougher to maintain a stable these days.”

Nunley is extremely adept at preparing first time starters and placing those runners at a price level where they’re competitive.  All three of his two-year-olds to start this year have finished in the money, with one win, and this season, he says, he has a crop of youngsters with some promise. Perhaps the best of those is Royal Brute, a half-brother to multiple stakes winner Umpateedle. Umpateedle won 17 races, including the Grade 2 Gallant Bloom and Grade 3 Endine, and earned $726,000.

“He’s a nice compact colt and has a nice way of going,” the horseman observed.  “He ran a good solid race the first time out (when he finished second, beaten two lengths) and we’re going to enter him back for next week. He looks like one of the better ones that mare has thrown in the past several years. We’ve got some others we like, too, but this one (Royal Brute) looks like he might be a cut above the rest.”

The Nunleys are a racing family through and through. They have two children, five-year-old daughter Keely and 11-year-old son Taven.  Randy tells the story of Taven’s birth. “Taven was born on Monday, she (Tracy) was discharged Wednesday morning, we went to Chili’s, had lunch then headed to the track because we were running a horse. The horse won and Taven was in the winner’s circle at three days old,” dad recalled with a chuckle. “We broke him in right quick!”

Which is to say that the Nunleys, and the Porters’ green, black and white colors, will continue to show up in Delaware Park’s winner’s circle for years to come.  It’s what Big John would have wanted.