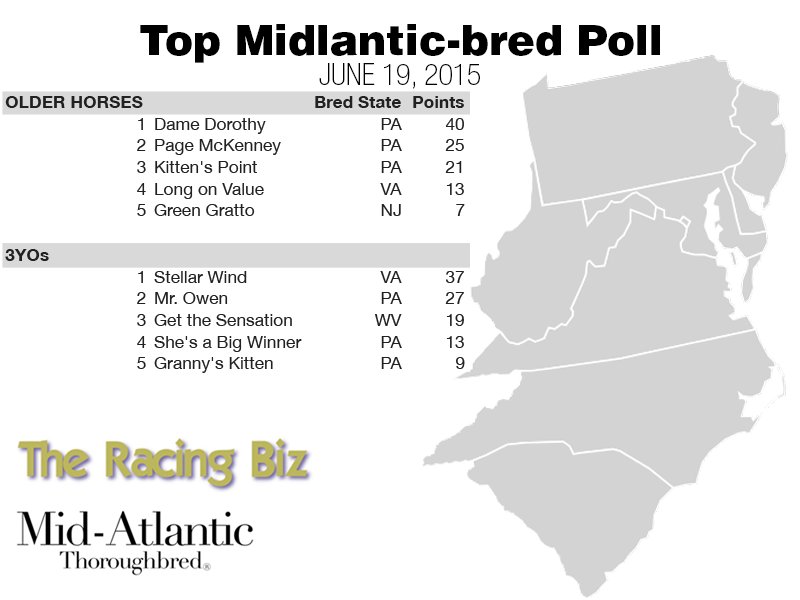 The two horses atop the Mid-Atlantic Thoroughbred/The Racing Biz Top Midlantic-bred Poll will both be in action this weekend.

Four-year-old Dame Dorothy, a Pennsylvania-bred, is the 9-5 favorite in Saturday’s Grade 3 Bed o’ Roses Handicap at Belmont Park.  And Stellar Wind, the Virginia-bred three-year-old, is favored at 5-2 in the Grade 2 Summertime Oaks at Santa Anita.

Dame Dorothy, a daughter of Bernardini out of the Woodman mare Vole Vole Monamour, received every first-place vote to secure a clear victory in the poll of older horses.  She was one of a trio of Pennsylvania-breds atop that list (and six PA-breds on the two lists).  Dame Dorothy was bred by Derry Meeting Farm and is owned by celebrity chef Bobby Flay, who paid $390,000 for her when she was a yearling.  Her signature win this season came in the Grade 1 Humana Distaff on the Kentucky Derby undercard.

Dame Dorothy was followed by two other Pennsylvania-breds — Page McKenney and Kitten’s Point — and then Virginia-bred Long On Value and New Jersey-bred Green Gratto.

Stellar Wind, a daughter of Curlin out of Evening Star, by Malibu Moon, was also the clear, though not unanimous, choice of voters.  She was bred in the Old Dominion by Keswick Stables & Stonestreet Thoroughbred Holdings LLC, purhcased at acution for $86,000 by Barbara Houck, and subsequently sold privately to current owners Hronis Racing LLC.  The beaten favorite in the Grade 1 Kentucky Oaks, she achieved her season highlight in winning the Grade 1 Santa Anita Oaks.

Pennsylvania-breds took three of the four spots following Stellar Wind, with Mr. Owen (who races in France) in second, She’s a Big Winner in fourth, and Granny’s Kitten in fifth.  West Virginia-bred Get the Sensation was third.

Pennsylvania-breds dominated the two lists, taking six of the 10 spots, including the top three among older horses.  Virginia-breds accounted for two of the runners, with one horse each bred in New Jersey and West Virginia.  Half of the top 10 are males, and half are females.