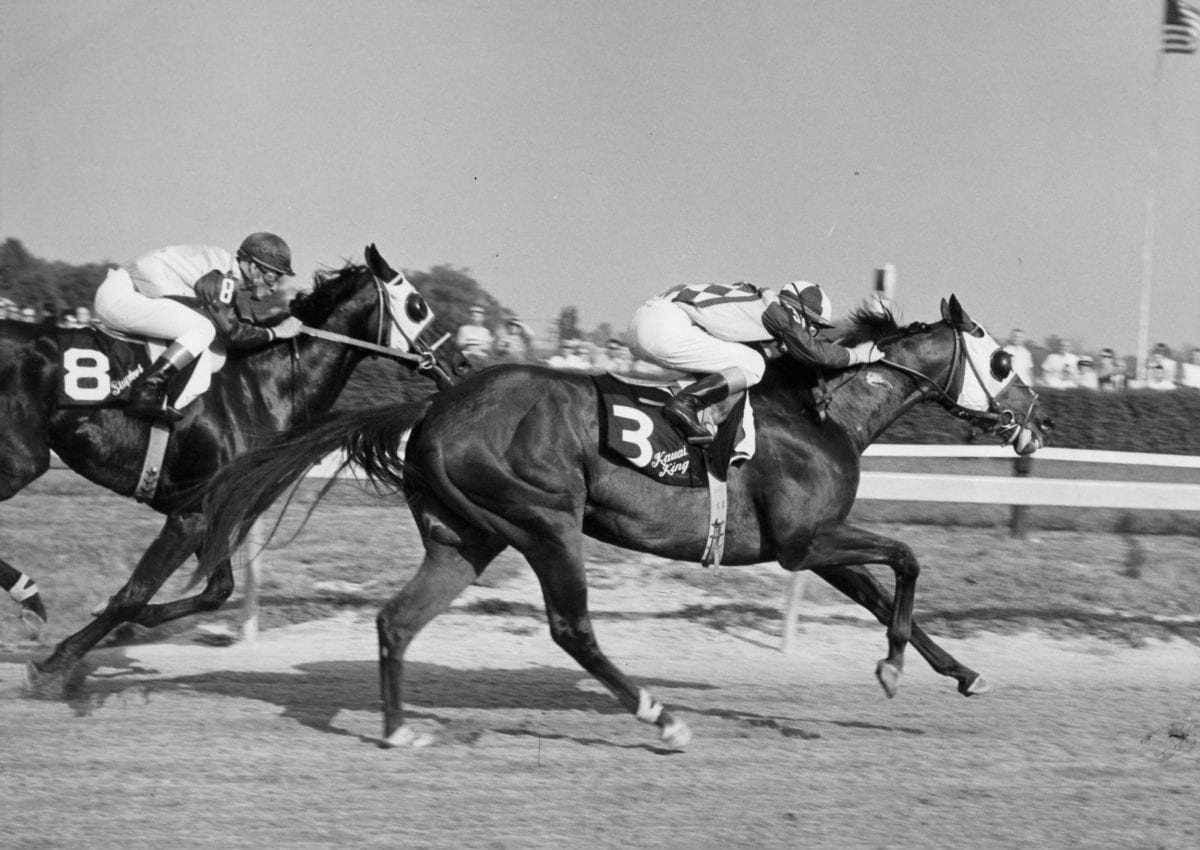 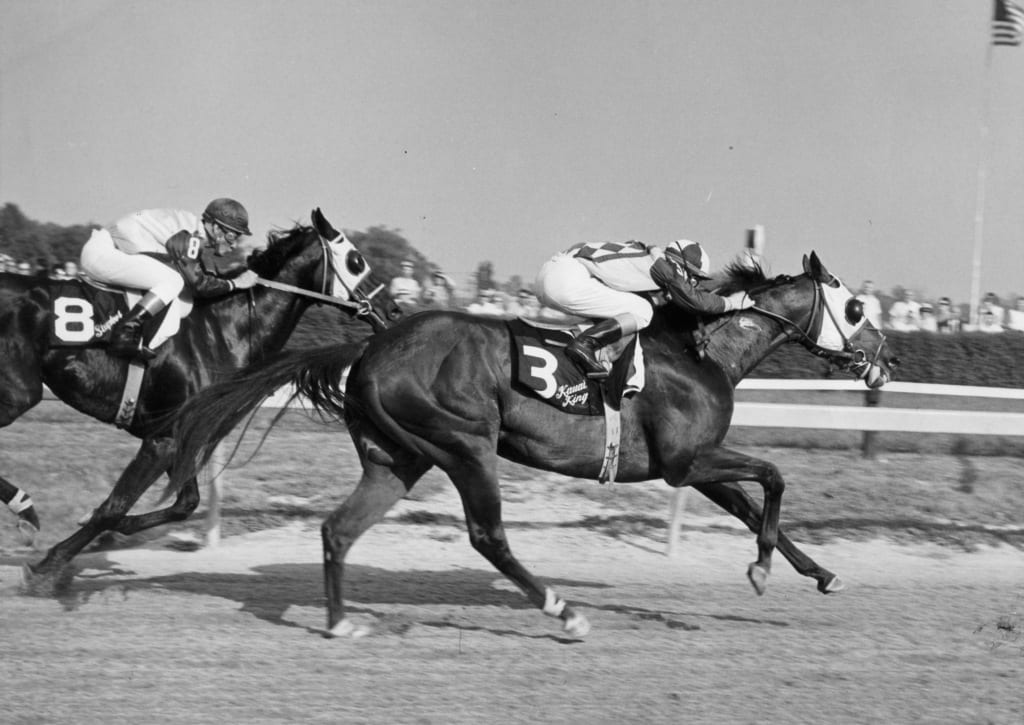 One might have forgiven Vanderbilt for a bittersweet sadness at his colt’s Belmont victory, for wondering what might have been, for wondering whether Native Dancer’s rough trip in the Kentucky Derby five weeks earlier had cost him a chance to be the ninth winner of the Triple Crown.  It was the only defeat of the Grey Ghost’s 22-race career.

Thirteen years later, a son of Native Dancer went to the Belmont, to try to do what his father didn’t have the chance to, and in the stands was the son of Alfred Vanderbilt Jr.

Out of In Sweep, Kauai King was bred by Virginian Frank O’Keefe in the name of Pine Brook Farm. His son Will said this week that the mare was sent to Vanderbilt’s Sagamore Farm to be bred and returned there to foal. O’Keefe planned to breed her back to a Sagamore stallion, and it made sense to register the foal as a Maryland-bred.

“Having a Virginia-bred was of little value because there was no racing in Virginia at the time,” he explained.

The colt sold for $42,000 at the Fasig-Tipton Saratoga yearling sale to a Nebraskan named Michael Ford. After a stint in the barn of Loyd Gentry, the colt was given to Henry Forrest to train. Jockey Don Brumfield was enlisted to ride the horse that even his owner wasn’t sure how to pronounce.

“I myself rhyme Kauai with Hawaii,” Ford told the New York Times, “but the Racing Form insists it should sound like Kow-wee. I’ve written to the chamber of commerce for help, but I haven’t heard from them yet.”

He knew exactly, though, why he had chosen the name, even if he didn’t express it in a way that contemporary ears might find terribly culturally sensitive.

“When King whatever-his-name-was united the Hawaiian Islands,” Ford explained, “the one island he never conquered was Kauai. At least, that’s what the legend says. So I picked the name of the unconquerable island for a horse I hoped would be unconquerable.” 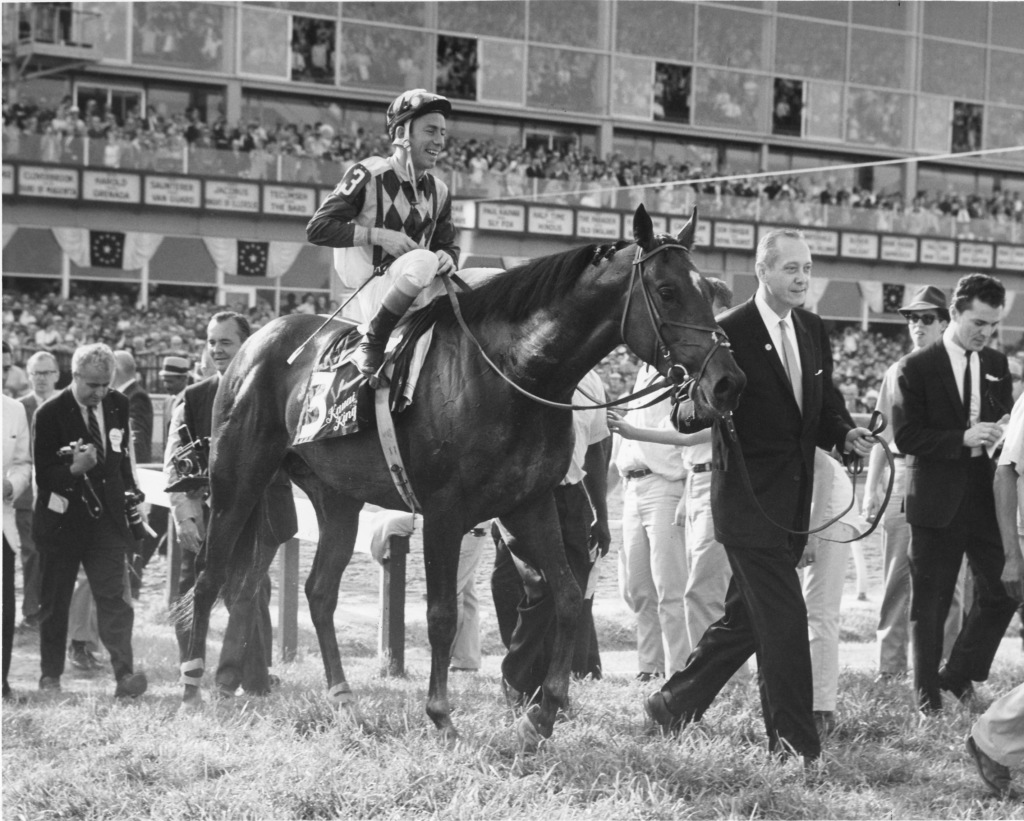 Kauai King put in his last Derby prep on April 23 at Bowie, winning the Governor’s Gold Cup in the mud. It was his sixth win in eight races with one second-place finish, his lone dud coming in the Florida Derby.

Aided by the late defection of Graustark and the absence of Buckpasser, both out of the Derby because of injury, Kauai King went to the post in Louisville the favorite, making the bettors look smart when he won on a fast track by a length and a half, gate to wire, giving Ford, Forrest, and Brumfield their first Derby win in their first Derby start.

A native of Kentucky, Brumfield had ridden hundreds of races at Churchill; it was his home track and his first Derby mount was a long time coming.

“’I didn’t cry, but I just got cold chills up my back,’” he said after the race, quoted in Sports Illustrated. “There were all these people, and so many of them were rooting for me. It’s a wonderful feeling. I’ve been waiting 12 years for this kind of a day, and now I’m the happiest hillbilly hardboot you have ever seen.”

Said Ford, “I was so shook up that I almost went into orbit.”

The win capped an Oaks-Derby double for both Native Dancer and Brumfield, who’d ridden the filly Native Street to victory the day before.

Alfred G. Vanderbilt III was only 16 at the time, and although he doesn’t remember much about Kauai King, he recalls knowing that that Derby win was a special one for his father, who had been so disappointed by Native Dancer’s loss.

“Kauai King had the connection to Dad,” said Vanderbilt this week. “That was in our heads. He was descended from Native Dancer, and therefore we were rooting for him. I think Dad wished that Kauai King had been his horse.”

Perhaps even more so when Kauai King came home to Maryland, to run at the track not 15 miles from Sagamore and take the second leg of the Triple Crown.

Like Northern Dancer two years before, Kauai King wouldn’t contest the Belmont Stakes at Belmont Park, which was undergoing a massive four-year renovation during which racing shifted a few miles southeast to Aqueduct. If Kauai King were going to become the ninth winner of the Triple Crown, he’d be more than the first Maryland-bred to do it. He’d be the first horse to complete the series at the Big A.

“I’m sure I was there,” said Vanderbilt. “We always went to the Belmont.”

If his memory is correct, he was one of the 56,011 fans on hand to see Kauai King fall short, finishing fourth, with the Belmont Trophy going instead to Amberoid, trained by Lucien Laurin, ridden by Bill Boland, owned by Reginald Webster.

“The day I graduated from high school is the day he lost the Belmont,” said O’Keefe. “That was the only one of the three races I saw in person.”

Kauai King was the first of four Midlantic-breds to arrive at the Belmont with a shot at the Triple Crown. Seven years later, a Virginia-bred, Secretariat, became the first Crown winner in 25 years with a 31-length obliteration of his Belmont rivals.

Eight years after that, another Virginia-bred, Pleasant Colony, would head to New York after the Preakness to take a shot at the Triple Crown; like Kauai King, he disappointed fans hoping to see history, finishing third. In 2004 the Pennsylvania-bred Smarty Jones took aim, finishing second.

As for Kauai King, he went home, for a while, anyway. He was syndicated a month after the Belmont for $2.52 million, Ford selling shares in his stallion career to two partners. He stood first in Maryland, then briefly in Newmarket before being sold to Japan, where he died in 1989, an unremarkable sire.

But not without establishing one more connection to his Maryland roots. One of those syndication partners was the owner of the Baltimore Orioles. And the other?

The owner of Sagamore Farm, where Kauai King stood for four years to begin his stallion career. A little late, too late for that Derby win, Alfred G. Vanderbilt Jr., would get to say that Kauai King was, in fact, his horse.