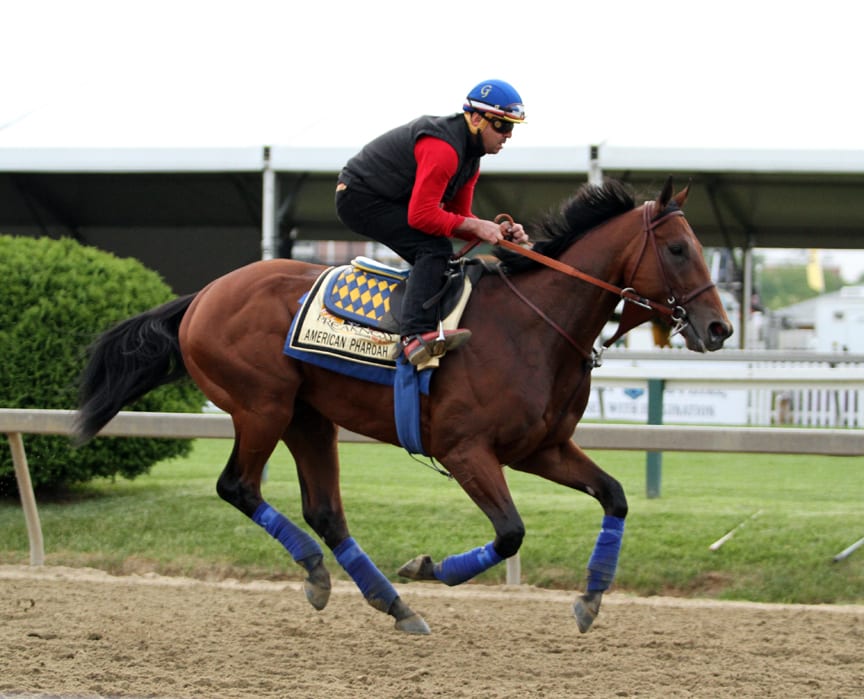 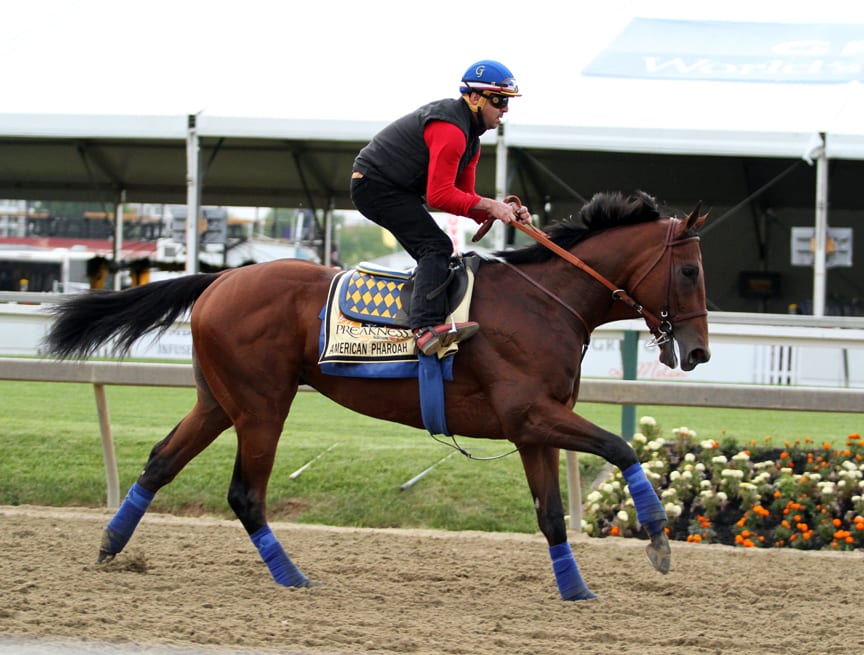 American Pharoah on the track at Pimlico on May 15. Photo by Laurie Asseo.

Quotes from a NYRA release

American Pharoah will gun for the Triple Crown on Saturday evening at Belmont Park, and trainer Bob Baffert expressed confidence in the son of Pioneerof the Nile.  But it won’t just be a coronation, and other trainers feel pretty good about their horses, too.

“When he finally came down the stretch he was moving so fluid, just like he usually does,” said Baffert, who has brought three previous runners to Elmont, NY, with a chance at Triple Cronw glory, only to be denied.  “It was a very positive gallop. He looks like he’s just moving along like he’s always moved along. It was very comforting to see that.”

American Pharoah has never previously raced the 1 1/2 mile Belmont distance.  Then again, neither has any of his seven rivals.

“He doesn’t know he has to go the extra distance, so we’re going to surprise him with that one,” Baffert said.

American Pharoah won a grinding Kentucky Derby, taking over late to defeat Firing Line and Dortmund.  Two weeks later, he made short work of his Preakness rivals, including the place and show horses from Louisville, romping to a seven-length score in a violent thunderstorm.

But no horse to run within 21 days of the Belmont has won since Da’ Tara upset Big Brown in 2008 — he’d run in the Barbaro Stakes on the Preakness undercard — and no Preakness runner has won the so-called Test of Champions since Afleet Alex did so in 2005.

As it happens, Afleet Alex’s presence will certainly be felt on Saturday.  His son, Materiality, is the 6-1 third choice on the morning line and figures to have one of the biggest shots to register the Crown-denying upset.  Materiality has made just four career starts, but he owns two wins at 1 1/8 miles and closed nicely after a tardy break to finish sixth in the Kentucky Derby.

Trainer Todd Pletcher, also represented in this race by Madefromlucky, has one major goal for Materiality: to get out of the gate.

“He drew a better post [8] to start with. Hopefully, his time in the gate will be significantly less than it was in the Derby,” Pletcher said. “He was the third horse to load in the Derby, and he spent a long time in the gate. The only thing I can think of and came to the conclusion, he fell asleep a little bit in the gate. He’s always been a horse that breaks well.”

Bolstering Materiality’s case, prior to his Derby run, he had shown ample tactical speed.  Breaking from the outside, he figures to have a chance to find a good spot from which to run.

Another runner who figures to get plenty of attention from the betting public is Frosted, who rallied nicely to be fourth in the Kentucky Derby and has been away since.  Trainer Kiaran McLaughlin said that he was pleased with his runner’s gallop this morning.  Don’t be surprised to see McLaughlin, who owns a Belmont win with Jazil in 2006, donning the villain’s black hat.

“We hope people are booing us after the race. We don’t mind a Triple Crown winner, just not this year,” he said.