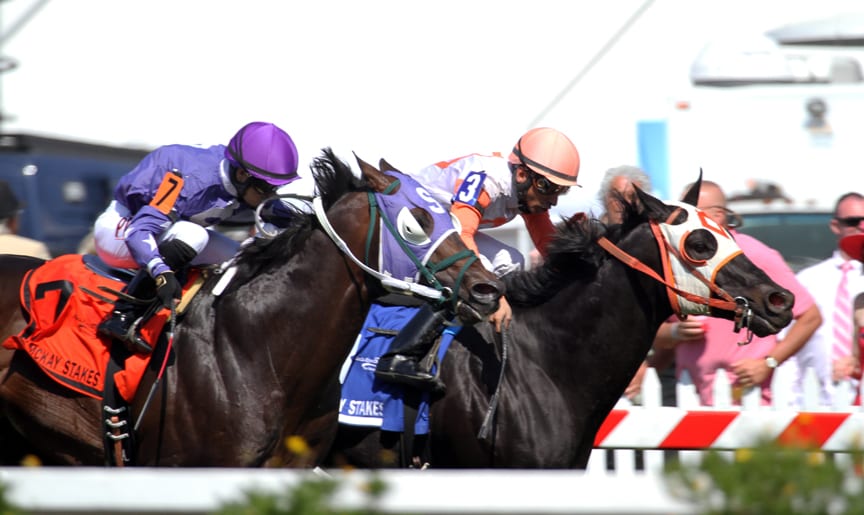 Ben’s Cat (in orange and white) rallied late to win the Jim McKay Turf Sprint over Bold Thunder on Black-Eyed Susan day. The two will meet again in the Pennsylvania Governor’s Cup. Photo by Laurie Asseo.

When Ben’s Cat returned to the races April 17 after five months of rest to see if he could continue his magnificent career at age 9, there were whispers the stakes machine may not have it anymore after a three-length defeat to Bold Thunder in a five-furlong turf allowance race.

Recent Hall of Fame inductee King Leatherbury, the Cat’s breeder, owner and trainer, wasn’t buying it.  The hard-hitting son of Parker’s Storm Cat – with a record of 29 wins from 47 starts, 24 victories in stakes races – was at a distinct disadvantage in that race as Bold Thunder was the lone speed horse in a field of five.

When the two met again on Black-Eyed Susan Day at Pimlico in the Jim McKay Turf Sprint, other speed horses made Bold Thunder run faster early, setting up Ben’s Cat patented late kick, and the old iron horse got up late to win by a neck.

Saturday evening, Ben’s Cat and Bold Thunder will resume their rivalry in the 45th running of the $150,000 Pennsylvania Governor’s Cup, a five-furlong turf sprint for 3-year-olds and up that is one of the main support races for the prestigious $500,000 Penn Mile at Hollywood Casino at Penn National Race Course.

The races are part of a special All-Stakes Pick Four that begins with the first race on the card, the $150,000 Penn Oaks, followed by Governor’s Cup, the $200,000 Mountainview Handicap, and finishing with the Penn Mile.

Leatherbury, 82, is a pragmatist when it comes to racing, even when talking about his amazing Ben’s Cat.

“Sooner or later, he has to have a turning point when he starts to go down, and it hasn’t happened yet,” Leatherbury said. “He had a couple of things against him that day in the comeback. Lone speed, and he’s never run a real big race first time back.”

Ben’s Cat has run in the Governor’s Cup three times, winning in 2011, tiring to fourth the following year and suffering a horrible trip when third in 2013.

In that 2013 start, Ben’s Cat raced close up early until another horse bore out badly on the turn, forcing Ben’s Cat to check sharply and drop well back. Yet he came flying at the finish.

“We got crucified,” Leatherbury said. “If I remember properly, the horse got carried way back and he still came on, remarkably, to run third.”

Last year, Leatherbury tried Ben’s Cat at six furlongs on the grass in the Grade 3 Jaipur and watched his horse finish fourth as the beaten favorite. A thorough handicapper, Leatherbury considered the Jaipur again this year but ultimately decided the Governor’s Cup suited Ben’s Cat better.

“We did a lot of research on both races,” Leatherbury said. “He would have had a good chance to win the New York races, but I like the five furlongs better. The five-furlong race, you have a faster pace that usually softens up the front-runners.”

The Pennsylvania Governor’s Cup drew a field of seven, and while Bold Thunder, third in the race last year, figures to make the lead, other fast horses are signed on.

Fabulous Kid, trained by Tim Ice, raced sharply on the front end this past winter at Oaklawn Park and recently scored a three-length victory in an allowance at Parx Racing. Those races came on dirt.

Pennsylvania-bred Last Heartbreaker and Snow Leopard also have been running on the lead in their dirt races and now will make forays onto the grass.

While Ben’s Cat figures to be a strong favorite, he will face, along with Bold Thunder, the accomplished 4-year-old closer Amelia’s Wild Ride, whom he beat by four lengths in the Jim McKay Turf Sprint. Amelia’s Wild Ride, however, won the Gulfstream Park Turf Sprint this past winter and has been training sharply at Parx Racing.

Grateful Nation will have the services of top rider Javier Castellano.

“He’s one of the coolest horses I’ve been around,” said Smith, who is based at Pimlico. “He’s got the most unique personality, and he’s such a goofy boy in the morning, but when it’s time to race, he’s got his game face on.

“Obviously, Ben’s Cat has beaten him a few times, so I’m not necessarily thrilled about having to run against him, but he’s been running against some of the best turf sprinters around here, and ‘Nate’ hasn’t made a fool of himself by any means.”

The Penn Mile is a Penn Gaming Racing Challenge Event, a year-long incentive competition that offers bonuses such as waived entry fee nominations and travel costs to leading owners, trainers and riders in select PGNI events.