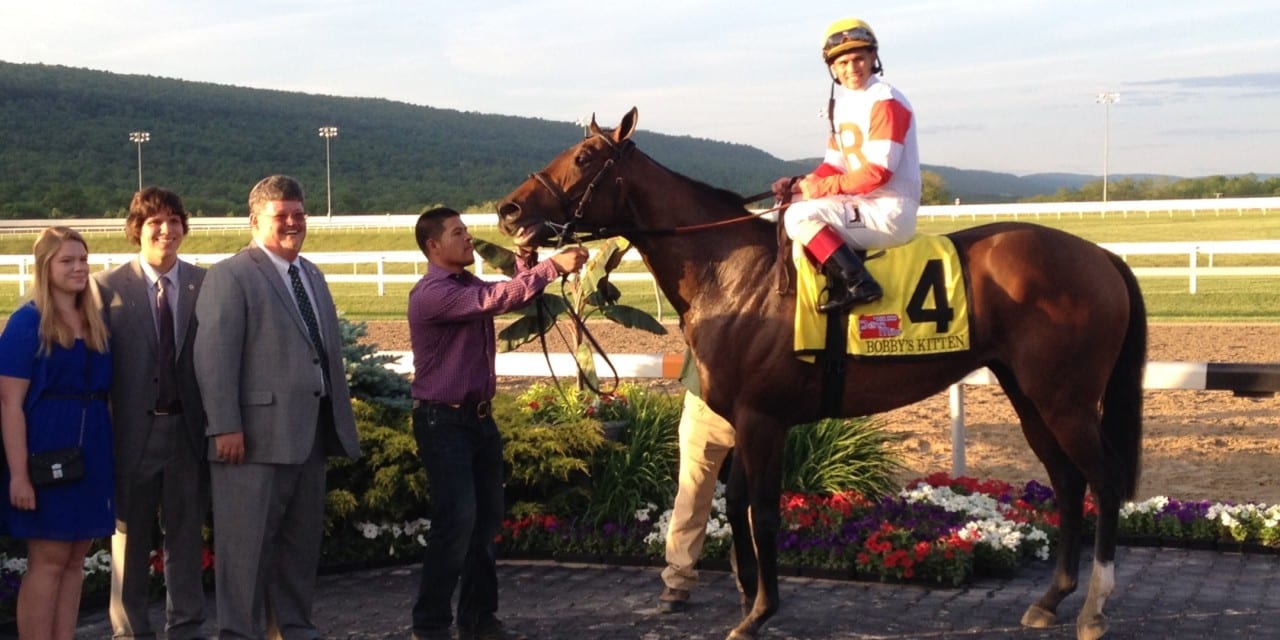 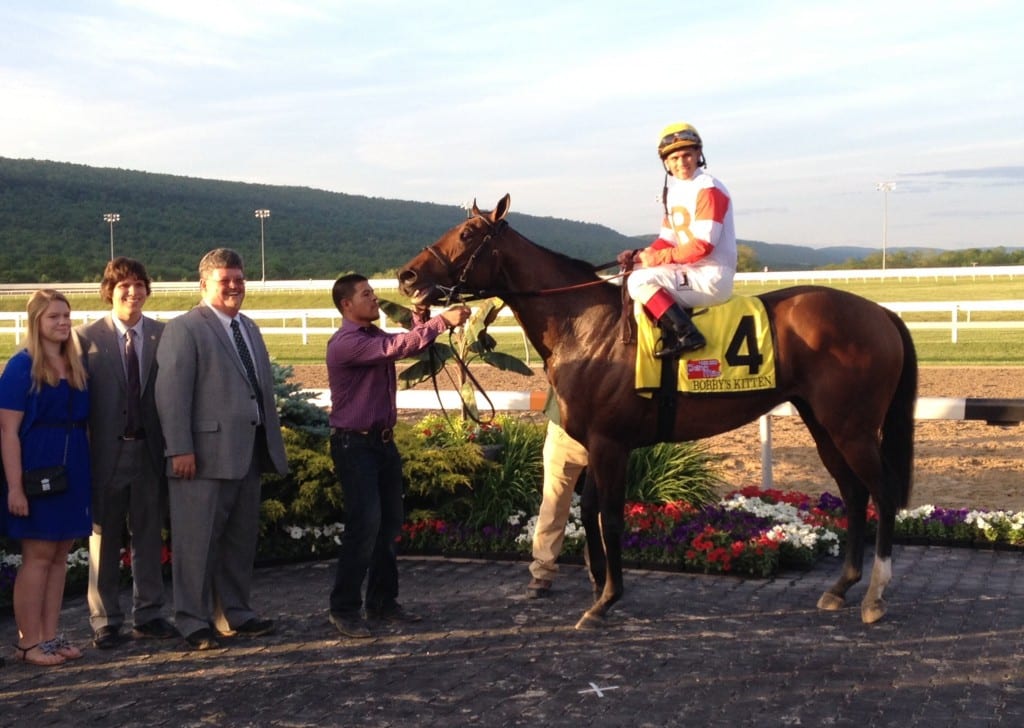 Throughout his spring campaign on the path to the Kentucky Derby, D. P. Racing’s Ocho Ocho Ocho always appeared to have a virtual asterisk next to his name as one member of the racing media after another prefaced their comments about the colt by saying he would eventually wind up as a turf runner.

The son of champion Street Sense had some big moments on dirt, winning the $1 million Delta Jackpot at 2 years old and finishing third in the Grade 1 Blue Grass. Now, after finding the Kentucky Derby too much to handle, the experts get to see if they were right as Ocho Ocho Ocho makes his grass debut as part of a superb cast of 11 lining up for the third running of the Grade 3, $500,000 Penn Mile at Hollywood Casino at Penn National Race Course.

In short time, the Penn Mile has established itself as one of the premier races in the country for 3-year-old turf horses. Last year’s winner, Bobby’s Kitten, went on to take the Breeders’ Cup Turf Sprint.

Penn National’s marquee event highlights a special All-Stakes Pick Four that begins with the first race on the card, the $150,000 Penn Oaks, followed by the $150,000 Pennsylvania Governor’s Cup, the $200,000 Mountain View Handicap, and finishing with the Penn Mile.

For trainer James Cassidy, the background chatter about Ocho Ocho Ocho was easily dismissed; he believes the horse is dangerous on any surface.

“I enjoy reading things, but I don’t pay too much attention to it,” said Cassidy, whose colt shared a flight into Allentown, Pa., this week with Papacoolpapacool, another West Coast contender in the Penn Mile. “Everybody’s got their opinions. I think he’ll like the grass. The distance he’ll like. I don’t have any doubts. He’s pretty keen to go. I don’t see any negativity.”

The speedy Ocho Ocho Ocho, who likes to race on or just off the pace, was pointed toward a turf race one time – the Juvenile Turf Sprint Stakes last November at Santa Anita. The race wound up run on the main track and Ocho Ocho Ocho won by 5 ¾ lengths.

After winning the Delta Jackpot, Cassidy rested his colt nearly four months until the Grade 2 San Felipe in March at Santa Anita, but the colt was not in good enough shape off the layoff to handle the powerful Dortmund. Ocho Ocho Ocho, however, rebounded with a strong performance in the Blue Grass and then went to the Kentucky Derby.

The colt stayed down along the inside throughout the race at Churchill Downs and made a brief move to within six lengths of the lead.

“I got a little excited for a moment, but then he folded up,” Cassidy said. “He didn’t want to go that far.”

Hall of Fame jockey Mike Smith, aboard for the Delta Jackpot victory, reclaims the mount for the Penn Mile.

Ocho Ocho Ocho will exit post position 4 in the Penn Mile, with Papacoolpapacool directly to his inside.

That colt, also based at Santa Anita, for trainer Phillip D’Amato, has been on a tear, winning the one-mile Pasadena Stakes on March 21 and the La Puente Stakes by 4 ½ lengths on April 18.

The La Puente was the fourth victory in eight career starts for Papacoolpapacool, all but one of which came on grass. D’Amato said it was time to leave California to find out where the son of Temple City ranks among the best 3-year-old turf horses in the country. He called the Penn Mile the perfect race to find out.

“The money is good and, more importantly, the timing is good,” D’Amato said. “I decided if it was time to step out and race against horses from the East and see where we stand, this is the spot. He handles his foes pretty easily in his races [at Santa Anita], and he’s just been training lights out. It made my decision to ship out there easy to test the waters.”

Horses are coming from all parts of the country for the race. The undefeated Granny’s Kitten, 2-for-2 for trainer Mike Maker, has been working at the Churchill Downs Training Center. So has front-running stakes winner Tuba. High Noon Rider and My Point Exactly ship in after good performances in Florida. Force the Pass trains on a farm in New Jersey. Night Prowler is based at Belmont Park and Gallery is at Monmouth.

“This time of year, horses come from all over,” said trainer George Weaver, who sends out High Noon Rider. “That’s what you get when you put up a half-million dollars.”

Night Prowler, trained by Chad Brown, is a two-time Grade 3 winner, having taken the Dania Beach on firm ground this past winter at Gulfstream Park, and the Transylvania on soft ground April 15 at Keeneland. In his past three starts, the gelded son of Giant’s Causeway has only been beaten once, in the Grade 3 Palm Beach, when steadied at the eighth pole.

“He’s a nice consistent horse, and this will be a big step for him, but we’re going to take a chance,” Brown said. “I don’t know if I’d call it a prep for anything. We’re taking it one step at a time with this horse.”

Woodwin W and Force the Pass square off again after finishing three-quarters of a length apart when 1-2 in the James W. Murphy Stakes on the Preakness Day undercard at Pimlico. Woodwin W stretched his record to 4-for-4 lifetime for trainer Jamie Ness, while Force the Pass had a two-race winning streak snapped that included a victory in the Cutler Bay Stakes at Gulfstream Park.

“That was my plan, to run at Pimlico,” said Force the Pass’s trainer Alan Goldberg, “and if he came back well we’d run in the Penn Mile. So far, so good.”

High Noon Rider finished second in the Cutler Bay and then delivered an outstanding effort when 2 ½ lengths clear in an allowance victory April 19 at Gulfstream. Weaver believes the late-running son of Distorted Humor is set for another top effort.

“I feel good coming into the Penn Mile,” he said. “Since we’ve been back on the turf the past few starts, he’s done well. There are horses in there that have some ability. I think our horse is going to step up. After the last start at Gulfstream, I told the owner I wanted to run in this race. It’s not like we just came up with this idea; it’s been set in stone. He’s worked really well going into it, and we’re ready to go.”

My Point Exactly closed out his 2-year-old season winning by 10 ½ lengths in a dirt mile maiden race at Gulfstream and then scoring on the grass in the Sunday Silence Stakes at Louisiana Downs with a late rush at the Penn Mile distance.

In his 3-year-old debut, the gray gelding was ambitiously placed in the Florida Derby, and after being bumped at the start, was no match for winner Materiality, one of the top-rated young horses in the country.

In his most recent start, My Point Exactly cut back to a mile on the dirt at Gulfstream and finished a good third to the multiple stakes winner Mr. Jordan. Now, trainer Bill Kaplan returns him to grass.

“He’s really a two-turn horse,” Kaplan said. “The [one-turn] mile race last time set up right for us thinking about this one coming up. I think he can actually run on anything. He should improve off his last race.”

Comanche’s Storm, second by a neck in the English Channel Stakes at Gulfstream Park after a wide journey in his most recent start; and Gallery, a two-time winner on the grass at the distance, complete the field.

The Penn Mile is a Penn Gaming Racing Challenge Event, a year-long incentive competition that offers bonuses such as waived entry fee nominations and travel costs to leading owners, trainers and riders in select PGNI events.