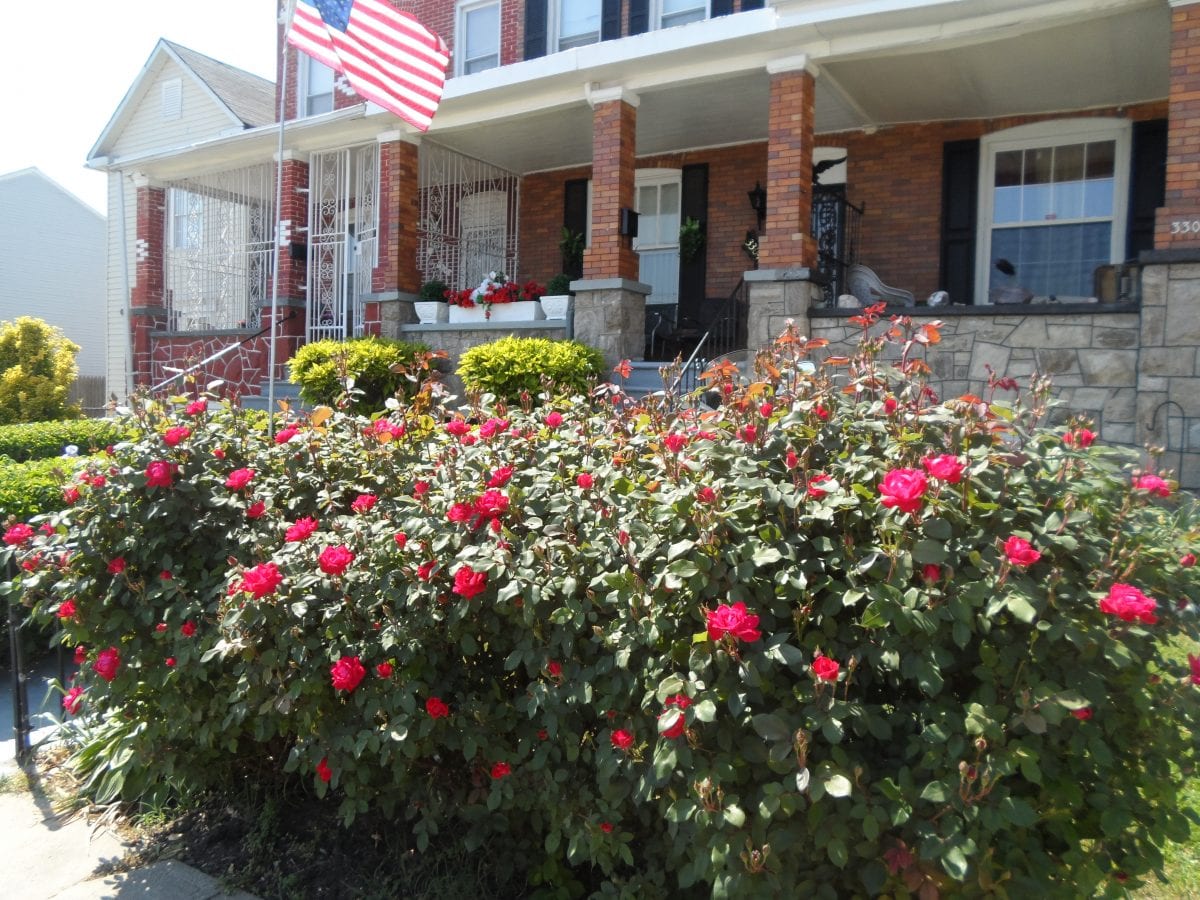 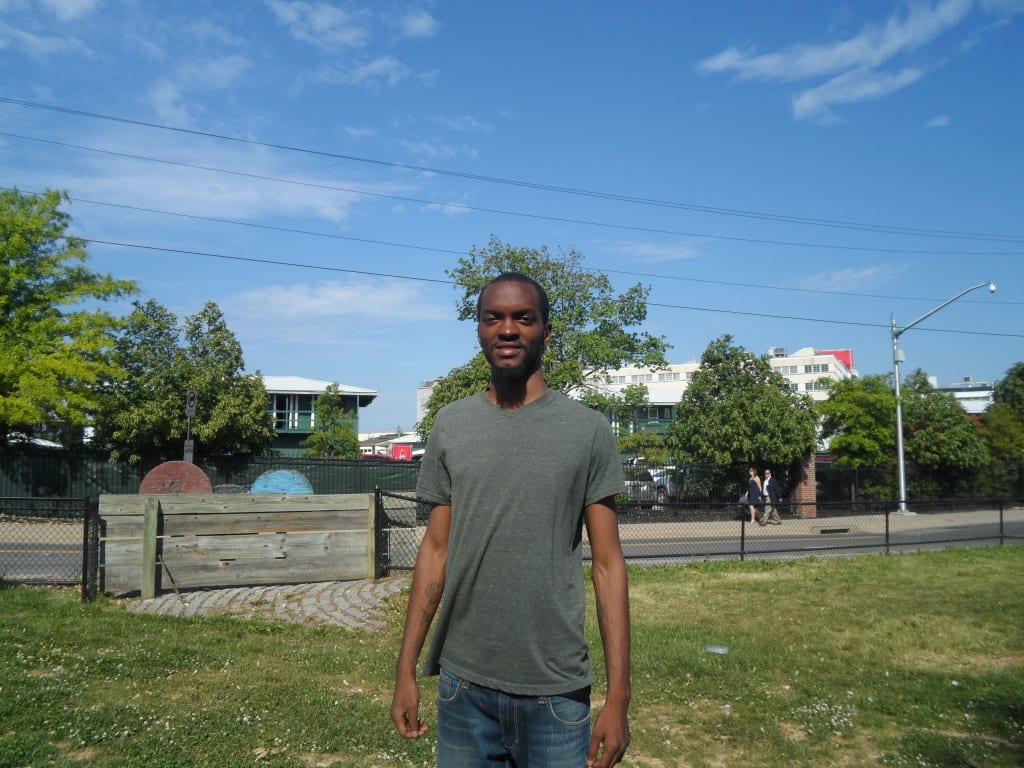 Aaron Dove stands outside of Pimlico. Photo by Teresa Genaro.

On the day before the Preakness, the streets around Pimlico Race Course were mostly quiet. A few residents were out selling water and trinkets, but aside from the main roads—Park Heights Avenue, Belvedere Avenue, Northern Parkway—the residential neighborhood sleepily enjoyed a perfect summer day, residents hanging out on their porches, sitting beneath trees, playing in playgrounds, gardening.

22-year-old Aaron Dove guided a visitor around the Garrison neighborhood, talking about life in Baltimore. He’s lived here his whole life, aside from a year at community college in Kansas. He ran track, a speedy, sprinting hurdler, at Carver Vocational-Technical High School, a little southeast of here. It was at Carver, recent three-time city champs in track and field, that he met Tony Pridgen, the high school track coach whom he calls his mentor.

A 2011 Baltimore Sun “notable,” Dove recently completed a Baltimore City construction training program, but has so far not found employment, even with the certifications he earned through the program, which paid participants as they learned. So when he heard that Pimlico was hiring for the Preakness, in the neighborhood in which he was born and to which he recently returned, he applied and was given a janitorial stint for the weekend.

His mother—he has a tattoo of her name on his left forearm–lives with him in a house that’s about a 15-minute walk from the track, and he has two younger brothers. An older brother was, he said, shot in the back of the head in 2006, the killers dumping the body in a dead-end street. Their incarcerated father was unable to attend the funeral.

He admits to “little hustles” in the years since he left Kansas, but has avoided the legal problems that kept his father in prison for much of his childhood.

An avid sports fan—the Ravens are his team—he wanted to study sports management at one point. Engineering also interested him, complementing the carpentry courses he’d taken in high school. He thinks he’ll go back to school at some point, and though he said that as a black man he felt like he had “a target” on him, he dismissed the criticism lobbed at the place he calls home.

“I’ve been here my whole life, and I’ve never had a gun pulled out at me,” he said. “I’ve never been stabbed. People say that they don’t like this area, but they don’t live around here, so they don’t have to worry about it.”

Fifteen hours later, as Dove prepared for his long Saturday shift, the tranquil Garrison neighborhood had sprung to life. Though hot and humid already at 9 am, the streets were lined with entrepreneurs and revelers, celebrating the party that had come to their neighborhood.

On the corner of Winner and W. Rogers, the convenience store did a brisk business, but not quite as brisk as a few years ago.

“When they stopped letting people buy liquor and take it inside, it hurt our business,” acknowledged the owner’s son, who preferred not to give his name. “But we still stock up on beer; passersby will buy one and drink it before they go in.” 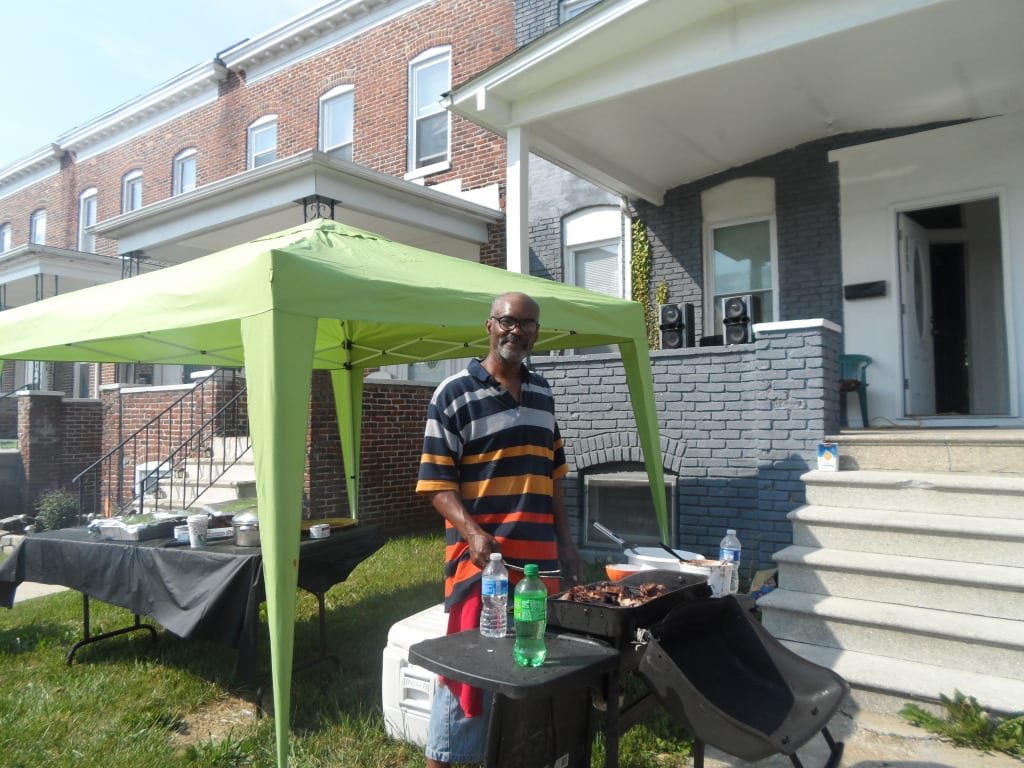 Mike Burnett cooking up some of the up to 50 pounds of chicken he’ll make on Preakness day. Photo by Teresa Genaro.

He was standing on the sidewalk, on a concrete lot behind the store, near a sign that advertises parking spaces for $40, waving in passing cars. It would be full, he said, around noon.

He and his family live south of Baltimore, in Anne Arundel County, and even though his parents work behind bullet-proof Plexiglas and the more expensive items in the store are behind the counter, he rejects the idea that the neighborhood is unsafe.

“You know what?” he said. “That’s false. This neighborhood is actually pretty good. The residents are very kind. We’ve been here for eight years, and that’s been my experience.”

A few feet down the block, Wonda Adams sat in a folding chair, a cooler alongside her, stocked with cold drinks and topped with various snacks.

Her daughter owns a house around the corner, and this is the third year that she’s set up to raise money. She said that she usually makes around $250.

“When people find out I’m doing it for my church, they give me extra,” she said gratefully. “If they buy something for $2, they give me a $5 bill and tell me to keep the change. Some people just make a donation.”

“About 30 to 50 pounds,” he said, the lilt of the Caribbean still singing in the speech of the Brooklyn native.

He’s serving up a plate of jerk chicken, rice and peas, and cabbage, and before long, a man in a golf cart swings by, asking Mike to “hook him up.”

“It’s a good day,” Burnett continued, one hand skillfully wielding a set of tongs, the other basting chicken with a homemade marinade. “Out here, this is fun. You don’t expect to make a living, but you can enjoy yourself.”

He estimates that he invests about $300 each year, hoping only to make his money back. Like the convenience store owner, he laments the passing of an infield policy that allowed patrons to bring in their own liquor and food.

“That gave the kids in the neighborhood a chance to make a dollar,” he said, because they’d offer to carry in the goods for customers, or wheel them in in wagons…for a small fee.

Few of his customers that day will be neighborhood residents. “They scarcely spend a penny,” he said, but adds, “This immediate area has a lot of decent people. Most of them are homeowners, and homeowners look at a neighborhood differently than a renter.”

Across Northern Parkway and down the road a few miles, the Mt. Washington Tavern starts getting Preakness traffic 10 days out from the race. This year, it held a fundraiser for the Permanently Disabled Jockeys Fund, and its proximity to the track has made it a Preakness favorite for decades.

The faces in the Tavern don’t look much like those up the road in Garrison. The people who shy from spending $10 on a plate of Mike Burnett’s food aren’t likely to indulge in the Tavern fare, but owner Rob Frisch, like so many others nearby, objects to the negative portrayals of local residents.

“I think they get a bad rap,” he said. “They look forward to the race, and they make a lot of money that weekend. When they talk about moving the Preakness to Laurel, it blows me away.”

He was at work on Saturday, and he struck up a conversation with a couple of people wearing Pimlico passes. Turns out that they provide the mugs for the infield mug club ($20 for all the beer you can drink), and in exchange, Pimlico makes a $1,000 donation to a church.

“That’s the behind-the-scenes stuff that nobody knows about,” said Frisch.

“It’s a good day for the residents of the city,” said the son of the convenience store owner. “They look forward to it.”

Back at Pimlico, Aaron Dove is sweating it out on the ground floor of the grandstand. Like the people in the neighborhood, he’s cleaning up after tens of thousands of visitors who have descended on this corner of Baltimore.

“When I was little,” he had said the day before, “I thought I was going to be way better off than this. Way better.”

“Job opportunities are really hard,” he continued. “If I left, if I went to Delaware or New York, I’d get a job within a week. 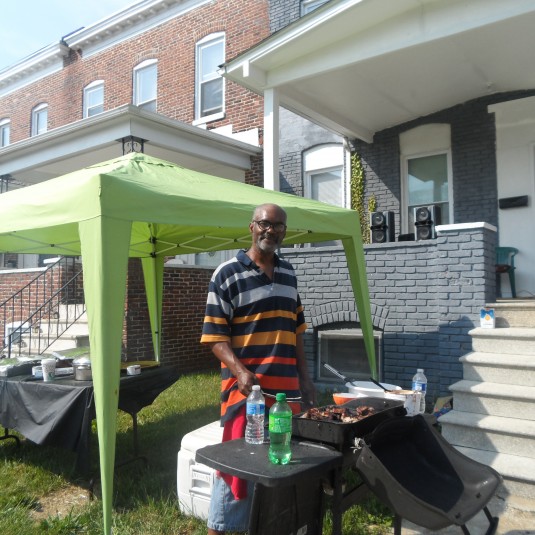 Mike Burnett cooking up some of the up to 50 pounds of chicken he’ll make on Preakness day. Photo by Teresa Genaro. 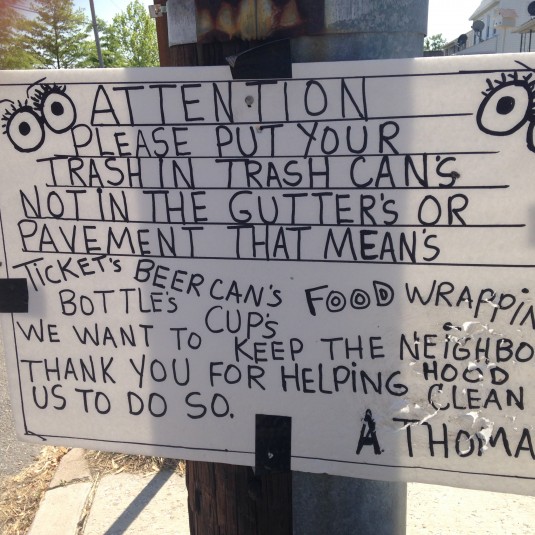 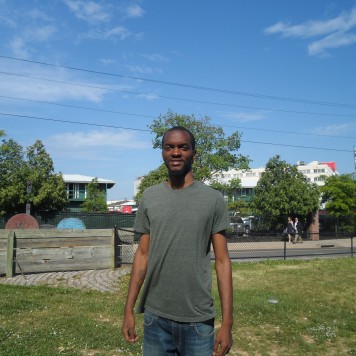 Aaron Dove stands outside of Pimlico. Photo by Teresa Genaro. 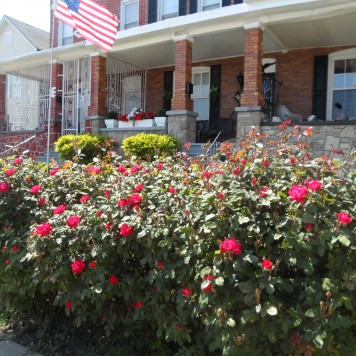 Rose bushes in the neighborhood near Pimlico. Photo by Teresa Genaro. 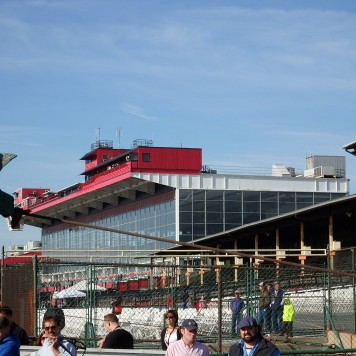