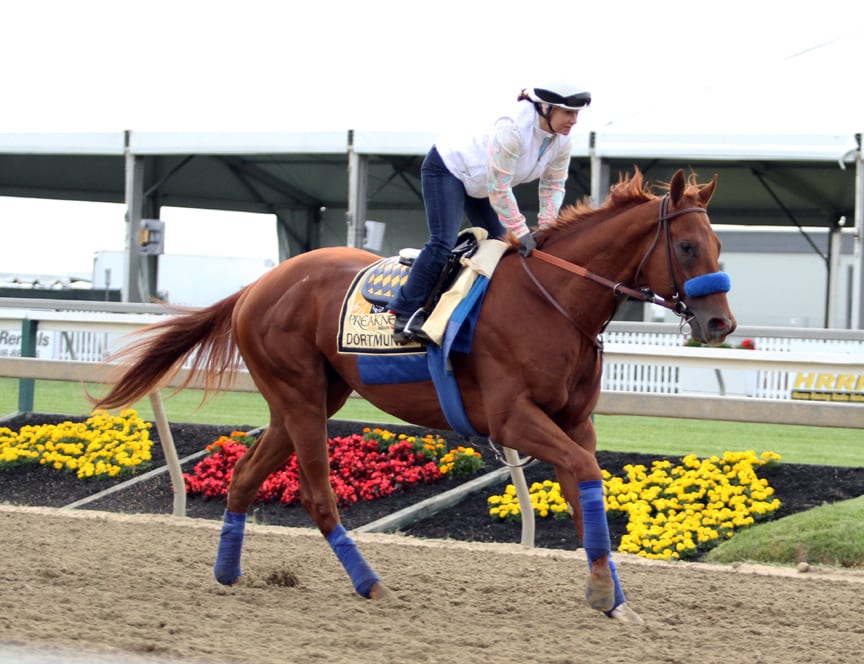 Dortmund on the track at Pimlico this morning. Photo by Laurie Asseo.

In a year when worthy Triple Crown nominees are numerous and healthy, a trio separated themselves two weeks ago in Louisville, led by the Kentucky Derby winner American Pharoah. Firing Line and Dortmund completed the Derby trifecta in a race lacking early pace, allowing the triplet to lead the 18 horse field and settle it inside the quarter pole.

“The top three are very talented,” explained Shah. “They will likely take turns beating each other in the Triple Crown and other big races. It will really be a factor of who is the better horse on a given day.”

Could Saturday’s Preakness be Shah’s turn with Dortmund?

Shah sat through an anxious Kentucky Derby draw beside his trainer Bob Baffert, where the #1 and #2 post lay open well after the midway point of the draw. Baffert was visibly nervous while Shah remained remarkably cool. Eventually the Baffert-trained duo of American Pharoah and Dortmund drew favorable Derby posts.

In Wednesday’s Preakness draw, Baffert found that he couldn’t elude fate and might have needed Shah, absent for the Preakness draw, by his side. In a similar situation, American Pharoah drew the inside post and moments later Dortmund found the #2 gate.

“I can’t believe I drew the 1-2 of all draws. I’m just glad I didn’t draw that for the Derby,” commented Baffert . “Sometimes you’ve got to give a little. It’s a short field, eight horses. He still has to break well. If he’s the best horse, we’ll find out.”

Baffert despises the inside post, so much so that he scratched favored Enchanting Lady (3-1), Shah’s filly who drew the rail in the 3-year old, six-furlong Miss Preakness Stakes. The inside post may not be the only factor in withdrawing from the 11-horse Miss Preakness field, but certainly a factor.

“I don’t like the inside,” admits Baffert. “I never like the one-hole. Sometimes they don’t break as well. When I was watching the draw and all these numbers were coming up, I go ‘This is not good.’”

Shah, proven not to overreact, remains positive chances of his colt in the Preakness.

“In a small field, it’s more of a jockey’s race. After they get past the first turn, the best horse will win the race,” observes Shah, who sees yet another upside. “The pundits say that the inside wasn’t the place to be at Churchill. We went there by default. At Pimlico, the track is a little bit more speed favoring to inside.”

In the Derby, Dortmund’s jockey Martin Garcia had to look right and outside to see American Pharoah. Saturday he expected to keep American Pharoah on the left. Drawing the outermost #8 post, Firing Line with veteran Gary Stevens aboard may have the most advantageous post able to eye Baffert’s tandem to his left. If it is more of a jockey’s race, it may be up to Victor Espinoza aboard the Derby winner to make the first move.

Shah regularly flies to California for business as the founder of CalNet, Inc., a technology company that’s prospered in government contracts specializing Intelligence Analysis and Language Services. This weekend, the Vienna, Virginia resident will be able to drive to see his horses run.

“It’s a lot more convenient for me. It’s just a hop, skip and a jump,” says Shah who began his career as an owner racing horses at Laurel, Pimlico and Delaware Park.

Baffert saddles favored Luminance (9-5) for Shah in the Black-Eyed Susan Friday afternoon. Luminance set the track record in his debut as a two-year old at 5 furlongs at Del Mar. A win at a mile began her sophomore season at Santa Anita. Luminance then ran second to Virginia-bred Stellar Wind in the Santa Anita Oaks. After passing on the Kentucky Oaks, Shah is looking forward Friday’s Black-Eyed Susan.

“It was a bit of a rush job to get her back to the track for the Santa Anita Oaks and she finished second so she was ready for a breather,” explained Shah.

Shah finds himself in a good opportunity to complete the rare Black-Eyed Susan/Preakness double with Luminance and Dortmund.

“From your lips to God’s ears,” hopes Shah.