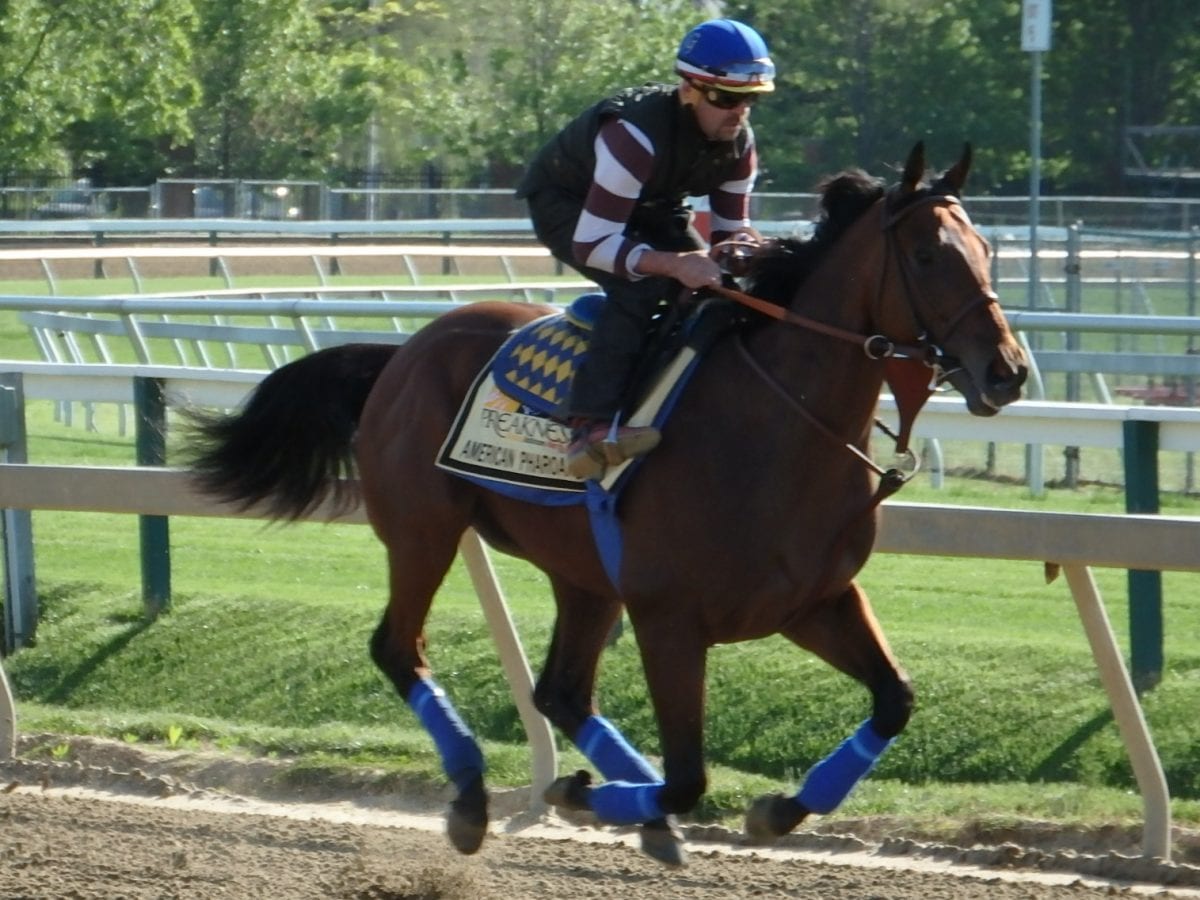 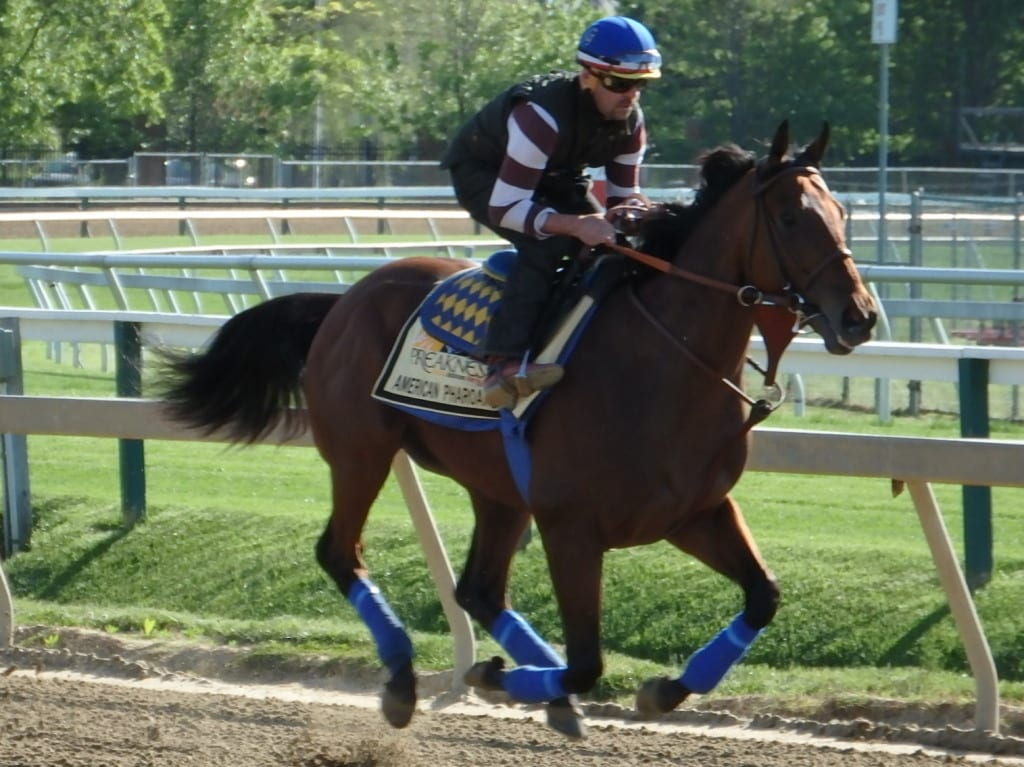 American Pharoah on the track at Pimlico. Photo by The Racing Biz.

After watching Kentucky Derby (G1) winner American Pharoah and third-place finisher Dortmund gallop over the track at Pimlico for the first time Thursday morning in preparation for Saturday’s 140th running of the Preakness Stakes (G1), trainer Bob Baffert said that he liked what he saw.

It was a cool morning with temperatures around 50 degrees when the two colts went to the track. Baffert said it was a good sign that they were on their toes and seemed to be anxious to train.

“Dortmund came by first. He was really moving well,” Baffert said. “You could see he was comfortable. American Pharoah, as always, he just floats over the track. He looked very eager. I was really happy with the way they went over it. They looked healthy and bright, in top condition. There is no regressing there. It looks like they are coming up to another big race. I felt really good about it today.”

Early on in his meeting with the media after the horses returned to the barn, Baffert was asked to talk about the post-position draw in which American Pharoah landed on the rail with Dortmund directly to his right in post No. 2.  At first, Baffert said he probably wouldn’t think about the posts until he met with his jockeys – Victor Espinoza on American Pharoah and Martin Garcia on Dortmund – until the day of the race. A little later, he returned to the subject.

“We didn’t like the draw,” he said.  “I just hate to see them next to each other like that. It’s something that you can’t change, so you just deal with it. I didn’t lose any sleep over it.”

Baffert agreed with comments made by trainer D. Wayne Lukas that the Baffert colts performed well in the Derby but probably were not at their very best.

“It’s hard to really gauge the Derby. A lot of horses were struggling that day,” Baffert said. “I don’t really think Dortmund brought his A-game and Pharoah probably didn’t bring his Super-A game, but they look really good. It looked like they came out of the race really well. American Pharoah hadn’t had a hard race. That was a good, stiff, hard race for him and it looks like he handled it pretty well. He’s a very exciting horse to watch and the way he moves over the track, he just floats.”

Firing Line, ridden by veteran Gary Stevens, overtook Dortmund in the stretch of the Derby and battled with American Pharoah before finishing second by a length. In the eight-horse Preakness, Firing Line and Stevens will start from the outside post, which could provide the savvy Stevens with a tactical advantage. Baffert praised Stevens: “He is focused and he is tough. He will will them to get in and beat you. He’s dangerous because he’s tough.”

“‘Pharoah’ had to really work to get by him,” Baffert said. “When (Espinoza) pushed the button he was stuck a little bit. It had me a little bit concerned coming to the quarter-pole. I thought maybe he wasn’t running, he was struggling a little bit, and still wasn’t really responding. He didn’t look like a tired horse. I don’t know if it was the crowd noise or what. A lot of it was that Firing Line was really running hard. Dortmund is a good horse and Firing Line was digging in and running hard and not giving up. It was just a great horse race the last quarter.”

Baffert said it was possible that the Preakness could turn into Round 2 of the battle that began at Churchill Downs.

“I think it’s going be very competitive. Those big three are going to be very tough again,” Baffert said. “Dortmund is going to be tough again. The way he came out of it, he could jump up. It’s going to be interesting. What happens going into the first turn will determine everything.”