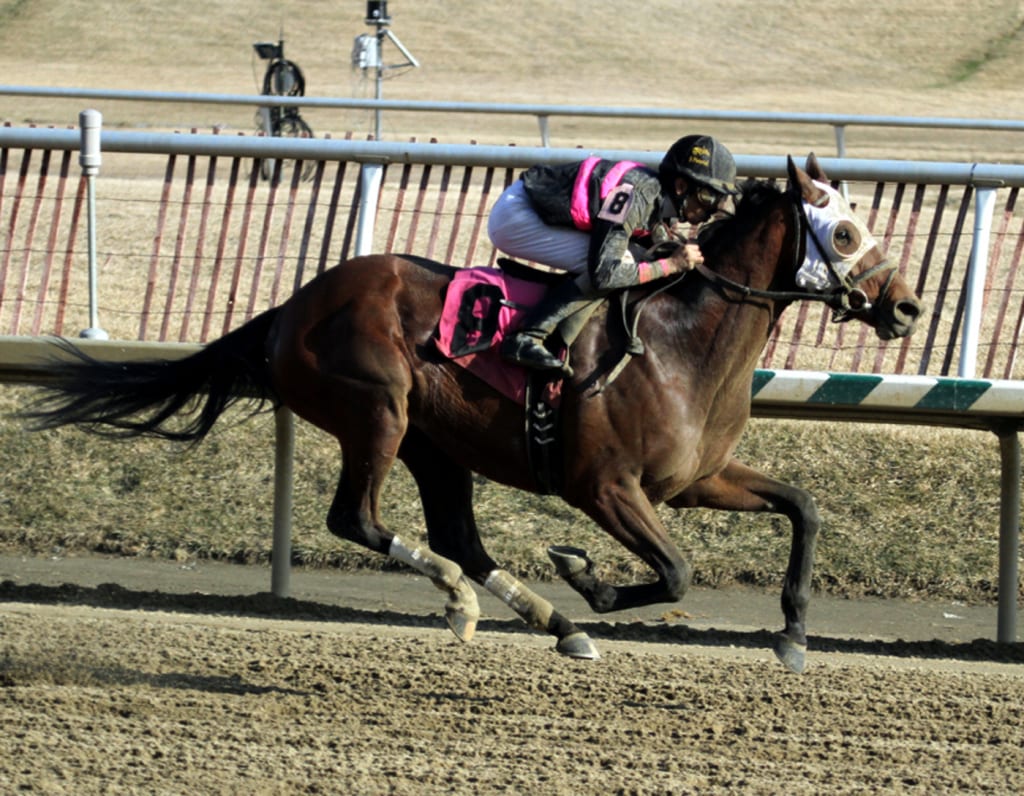 Kid Cruz won two stakes in Maryland in 2014 before finishing eighth in the Preakness. Photo by Laurie Asseo.

Vina Del Mar Thoroughbreds and Black Swan Stable’s Kid Cruz is set for a return to Pimlico Race Course on Black-Eyed Susan Day, May 15, a year after competing in the 2014 Preakness Stakes (G1).

The Linda Rice-trained 4-year-old is scheduled for an attempt to make amends for a subpar performance in the Preakness last year in the $300,000 Pimlico Special (G3), the historic 1 3/16-mile event for 3-year-olds and up.

Kid Cruz, who finished eighth in the Preakness after winning the Federico Tesio Stakes over the Pimlico main track, subsequently held his own against the top 3-year-olds of 2014 while winning the Easy Goer Stakes and the Dwyer Stakes (G3) at Belmont, before finishing third in the Jim Dandy (G2) and fourth in the Travers (G1) at Saratoga.

“He didn’t come into the Preakness as well as we would have liked. The way he did perform, it kind of made sense because things didn’t go smoothly into that race,” said Rice, noting Kid Cruz had some minor foot issues. “We were disappointed of course. We were hoping things would go the right way, but things were not going smoothly into that race, so we just threw it out.”

The son of Lemon Drop Kid came out of the Travers with a bone chip in the upper knee joint in his left front leg and underwent surgery to remove it before going to the sidelines until February.  Kid Cruz finished sixth off the bench in the listed Evening Attire Stakes over the Aqueduct inner-track surface on Feb. 22 before showing vast improvement with a late-closing second in a mile optional claiming allowance over the Aqueduct main track on April 1.

“We were very happy with his last race. It was a little short for him, but he really was running real well late and he galloped out real strong,” Rice said Tuesday morning from her Belmont Park headquarters. “I’m hoping we have him back on track and we’re excited to try him in the Pimlico Special.”

Rice and Vina Del Mar Thoroughbreds claimed Kid Cruz for $50,000 out of a six-length maiden victory at Aqueduct on Nov. 22, 2013. Former owner Black Swan Stable subsequently reached a deal with the new owner to buy back a minority interest in the Kentucky-bred colt.

“He ran a nice race the day we took him, so we were pretty happy with the claim right away,” Rice said. “Then during the next 30 to 60 days I could see a continual improvement in the horse. We claimed him in November and I went ahead and nominated him to the Triple Crown in January, so by then I was pretty excited about how he was progressing.”

Rice is hopeful that Kid Cruz will come back stronger and better for his 4-year-old campaign.

“I think the Pimlico Special will be a real telling point for us,” she said.

Kid Cruz is likely to clash in the Pimlico Special with Page McKenney, a multiple-stakes winner who finished third in the Charles Town Classic (G2) in his most recent start; and Transparent, the Kiaran McLaughlin-trained veteran stakes performer who captured an optional claiming allowance last time out. Other candidates include Tapiture, Albano and Turco Bravo.

Bob Baffert-trained Luminance is scheduled to run in the 91st running of the Black-Eyed Susan, a 1 1/8-mile stakes for 3-year-old fillies. Luminance finished second in the Santa Anita Oaks (G1) last time out after winning the first two starts of her career for Kaleem Shah, owner of Derby third-place finisher and strong Preakness candidate Dortmund. Lightly raced Ahh Chocolate is being pointed to the Black-Eyed Susan by trainer Neil Howard after the daughter of Candy Ride won the first two starts of her career, including a first-level allowance at Keeneland while stretching out around two turns last time out.

Divine Dawn, a recent second in the Adena Springs Beaumont (G2) at Keeneland, is a prominent candidate for the Adena Springs Miss Preakness, a six-furlong sprint for 3-year-old fillies. Trained by Larry Jones, who saddled Lovely Maria to victory in the Kentucky Oaks (G1) last Friday, Divine Dawn was also nominated to the Black-Eyed Susan.