Kaleem Shah’s journey to the Kentucky Derby started on the other side of the world in one of the warmest countries on the globe.  Yet, the Vienna, VA resident is California cool.

While growing up in India, Shah watched his father, Majeed, train two winners of the Indian Triple Crown, which consists of the Indian 2000 Guineas, the Indian Derby and the Indian St Leger, all run at the same racetrack in Bombay. Modeled on the British form of racing, Indian racing is all backwards to America: on the turf and run clockwise. 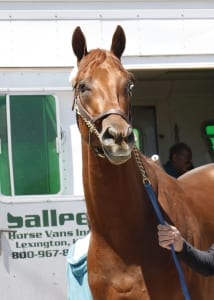 Despite his father’s success, and in accordance with his father’s wishes, the younger Shah was dissuaded from following the family craft and encouraged instead to follow his studies, putting his racing interests on hold indefinitely.  Did father know best?

“No doubt about it,” answers Shah.  “He knew I was good in my studies so he had made me focus on my studies first.  He said, ‘Down the road, should you be lucky and successful in the kind of work you’ve chosen to do and you want to be an owner, so be it.’”

After earning two Master’s degrees in America, Shah founded CalNet in 1989 and, once on his financial feet, returned to his childhood love.  After a baptism to the American game with Maryland trainers Dale Capuano and the late James Murphy, Shah met trainer Bob Baffert at a sale, liked his approach and pursued racing through his San Diego office.

Once on the West Coast, his venture into racing took off, most notably with Bayern, whose graded stakes wins include the 2014 Breeder’s Cup Classic (G1) at Santa Anita.   Bayern was suppose to be Shah’s 2014 Kentucky Derby horse, but a minor foot bruise set him back just enough in the spring so as to not be a factor in last year’s Triple Crown.

Shah brings one of two undefeated three-year-olds into Saturday’s sensational Kentucky Derby field.  Dortmund is six-for-six in his career.  But in one of the most competitive, perhaps best, Derbies in a generation, being undefeated wasn’t enough to make Dortmund (3-1) the favorite.  In fact, this year’s event is so tough that Materiality (12-1), the other horse entered with perfect marks, isn’t the favorite either.

Shah can blame his trainer for that.  Baffert also conditions American Pharoah (5-2) who was installed as a slight favorite over his stablemate.  Several in this field might have been the Derby chalk in other years, but are considered moderate long shots in this superb sophomore class.

“It’s a very deep field and I greatly respect the competition,” says Shah.  “The one horse I fear the most is Firing Line.  He has Hall of Famer Gary Stevens aboard and is owned by a friend of mine, Arnold Zetcher.  We have a history of close battles.  So good, so far for Dortmund.”

Firing Line has tested Dortmund twice this spring in California, missing out both times by a head of tarnishing Dortmund’s perfect record.  Dortmund is sired by 2008 Derby-Preakness winner Big Brown, who was eased in that year’s Belmont Stakes. Jockey Martin Garcia has captained all six of Dortmund’s wins, including the four-length Santa Anita Derby (G1) score that punched his ticket to Churchill Downs.

“In life, whether in business or in horse racing, I try to moderate myself, not get too high, not get too low. When Bayern was coming down the stretch in the Breeder’s Cup Classic, I was not jumping up and down.  I was calm and composed,” recalls Shah.  “Then I was ecstatic on the result.”

Perhaps that explains why, while Baffert was squirming in his chair during the Derby Draw on Wednesday evening as other horses drew the more favorable outside positions, Shah remained cool.  With the pills for #1 and #2 post still in the box and the slips of Baffert’s interests, Dortmund and American Pharaoh, not selected, the Hall of Fame trainer was visibly nervous.

Baffert has seen it before.  In 2010, his runner, Lookin at Lucky, went off as the Derby favorite despite drawing the inside post.  Baffert, never comfortable with the draw, considered the unthinkable, scratching out of the Derby.  Lookin at Lucky’s Derby was over before they crossed the wire the first time as he collided twice coming out of the gate on a sloppy track and never moved up farther than sixth.

In contrast to his nervous tablemate, Shah never flinched. Finally, well into the second half of the draw, Dortmund drew stall number eight.  Shah and Baffert shared a relieved laugh.

Dortmund, like Bayern, is named after a hometown of a European soccer team.  Earlier this week the two teams squared off on the field with Dortmund upsetting Bayern in penalty kicks after a 1-1 standoff.

“To win the Kentucky Derby, I think it’s up to the racing gods, these wonderful horses and the jockeys,” observes Shah.

But he probably won’t.