Stellar Wind “a redhead with attitude”

Those are just a few words used to describe Hronis Racing LLC’s Stellar Wind, who overcame a troubled start and rallied from the back of the field to capture the Grade 1 Santa Anita Oaks April 4 by nearly six lengths, stamping her as the West’s leading contender for the Grade 1 Kentucky Oaks on the first Friday in May.

Prior to the Santa Anita Oaks, Stellar Wind won the Grade 3 Santa Ysabel Stakes by 2 3/4 lengths on February 28.

Although the chestnut daughter of Curlin-Evening Star, by Malibu Moon is currently based in California, she has strong ties to the mid-Atlantic region. She was bred in Virginia by Keswick Stables and Stonestreet Thoroughbred Holdings LLC and sold as a yearling at the 2013 Fasig-Tipton Midlantic sale at Timonium by Pennsylvania-based consignor Marshall Silverman.

Marylander Barbara Houck bought her at that sale and sent the filly to trainer Donald Barr at Laurel Park, where she made her first two starts.

“She was a red-head with a bit of an attitude when you showed her,” recalled Silverman. “She would have hissy fits in the stall. She was her own filly; she’d swish her tail and then wouldn’t want to go back in the stall.”

It was veteran trainer Barr who was able to iron out Stellar Wind’s idiosyncrasies, thanks to his patience and good old-fashioned horse sense. She responded by breaking her maiden so impressively at Laurel Park in December that offers to buy her came flooding in, and she was soon on her way to California.

“Barbara (Houck) bought four yearlings at that Timonium sale,” recalled Barr. “We really liked Stellar Wind, even though she wasn’t a perfect model, but she was by Curlin and we got her for $86,000. All four yearlings went to the Elloree Training Center (in South Carolina) to be broken, and they liked them all, but especially Stellar Wind and a Street Sense colt named Savvy Street, who’s also won a stake (the Miracle Wood at Laurel Feb. 16).” 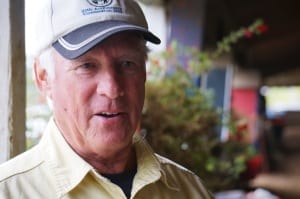 Trainer Donald Barr called Stellar Wind “a horse with a mind of her own.” Photo by Vas.

Barr said he discovered that Stellar Wind was a bit of a challenge soon after she arrived in his barn.

“She was a horse with a mind of her own,” he said. “By the second or third day, she decided she wasn’t going to the track. She didn’t want to walk out of the barn. So I started sending a pony. Every day at 8:30 a.m. the pony would come to take her to the track. She wouldn’t go anywhere without the pony. As soon as they would get on the track, she would be okay, she wasn’t a problem after that.”

Barr also found out that Stellar Wind needed some work breaking from the gate.

“At first, she didn’t break well at all,” he said. “Matter of fact, in her first start (Nov. 20 at Laurel), I didn’t expect her to break well, and she didn’t. It wasn’t a terrible break, but she was steadied some and then closed for third going six furlongs. Right then I knew she wanted to go further.”

Stretched out to a flat mile for her second start, Stellar Wind put on a dazzling display. After brushing with another rival when the gates opened, she tugged her way forward to press the pace, repulsed several bids and then exploded down the lane, with the official chart noting that she “eagerly pulled away and was solidly hand ridden the final furlong.” Her winning margin was 8 ¾ lengths; she completed the last quarter-mile in a sharp 24 seconds flat.

“There were some serious offers, and there was one she couldn’t refuse from (bloodstock agent) David Ingordo,” said Barr. “He watched her gallop and he recognized the fact that he was looking at a horse that wanted to go long and had just run out of the TV screen.”

Barr said that, while Stellar Wind “wasn’t perfect” in front, she more than made up for it with her sheer talent.

Silverman recalled that the filly had some “piddling” issues, but “they were so insignificant that they weren’t a big deal.”

“She vetted just fine and she had just come out of the Saratoga select yearling sale, so you know she was okay,” he said, noting that Maryland is a great place to find top racehorses.

While John Sadler now trains Stellar Wind, Barr can take pride in knowing that he was able to get her career going in the right direction.

“If you had asked me whether I thought she would be a Grade 1 winner, I’d have to say at that stage I didn’t know, although she had a really nice way of going,” said Barr. “Bringing young horses along is what I do. This was a sale where everyone was happy – everyone’s a winner with this horse.”