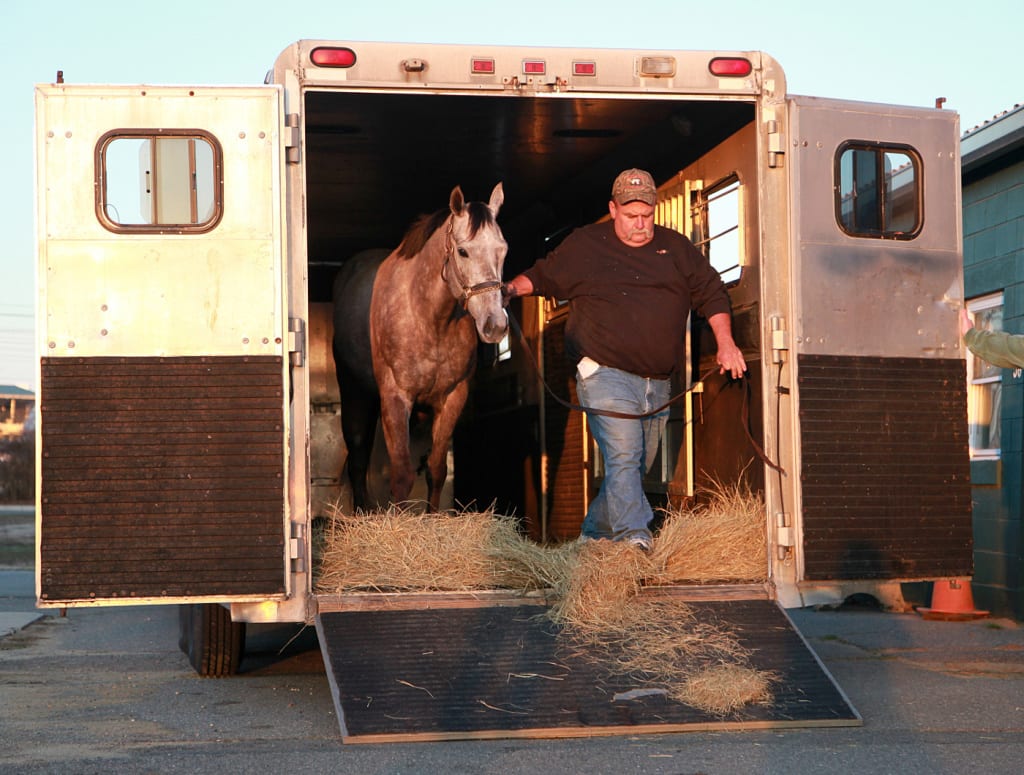 File photo of Trish’s Wish, the first horse on the grounds for the 2014 Monmouth Park meet.  Photo By Bill Denver/EQUI-PHOTO

Carrying seven horses for the John Mazza barn, the first van rolled through the Monmouth Park stable gate at 7:05 am on Saturday, officially kicking off the training season for the 2015 meet, which runs from May 9 through Sept. 27.

“We’re always happy to be back at Monmouth,” said Mazza, who’s been winning races at the Jersey Shore for nearly 60 years.  “I ran my first horse here back in 1956 and I’ve been here ever since.  I love New Jersey racing.  I’ve been with Holly Crest Farm (in Locust, N.J.) for over 50 years and I’m very proud of that.  New Jersey’s home and there’s no place like Monmouth Park.”

Mazza spoke highly of a 2-year-old that will be arriving in Oceanport this Wednesday, a horse by freshman sire Uncle Mo that cost $190,000 just last month.

“He’s a really good looking 2-year-old,” Mazza said.  “We’re excited about him and hope to see some really good things.  He’s unnamed right now, but the owner can have fun figuring that out.”

Post time for the 2015 meet will be 12:50 p.m. with the $1 million, Grade 1 Haskell Invitational on Sunday, Aug. 2, once again proving the centerpiece of the summer season.  Haskell Day will be complemented by three other graded stakes:  Monmouth Cup (G2), WinStar Matchmaker (G3) and Oceanport (G3).  Other highlights of the 58-day stand include the United Nations (G1) and Salvator Mile (G3) on July 5; Molly Pitcher (G3) on July 3; Monmouth Stakes (G2) on June 7; and, Iselin Stakes (G3) on Aug. 30.