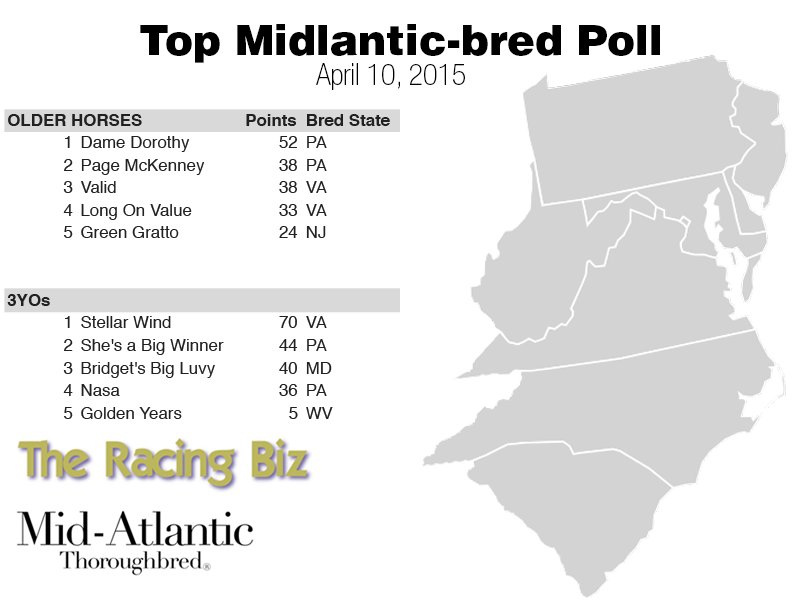 Virginia-bred Stellar Wind began her career at Laurel Park before being sold privately and jetting off to Southern California.

Two graded stakes wins later, the daughter of Curlin has zoomed to the top of the first Mid-Atlantic Thoroughbred/The Racing Biz Top Midlantic-bred Poll of 2015.  Stellar Wind received every first-place vote from participating media and others in the racing industry to lead the list of three-year-olds.  Pennsylvania-bred Dame Dorothy, recently second in the Grade 1 Santa Margarita, earned the top spot among older horses.

Stellar Wind has won three of four starts in her career, including the Grade 3 Santa Ysabel and Grade 1 Santa Anita Oaks, both at Santa Anita Park.  She was bred in Virginia by Keswick Stables and Stonestreet Thoroughbred Holdings LLC and is out of the winning Malibu Moon mare Evening Star.

Barbara Houck bought Stellar Wind out of the 2013 Fasig-Tipton Eastern Fall Yearling Sale at Timonium for $86,000 from consignor Marshall Silverman.  Stellar Wind then delivered a flashy maiden-breaking score in her second start and soon was sold privately to Hronis Racing LLC.  She is now based at Santa Anita with trainer John Sadler.

While Stellar Wind took down every first-place vote, the voters were not so certain about the top runners among older horses.  Three different runners received votes in the top spot, with voters settling on Dame Dorothy to edge Page McKenney and Valid.

Dame Dorothy, a daughter of Bernardini out of the winning Woodman mare Vole Vole Monamour, has a win, in the Florida Sunshine Millions Distaff, and that second in the Santa Margarita from two starts so far this year.  The four-year-old is a Grade 3 winner and has earned $437,460 in her seven-race career.

Owned by celebrity chef Bobby Flay, Dame Dorothy was bred by Derry Meeting Farm and is trained by Todd Pletcher.

The two groups of five runners include at least one from each of the five major breeding states in the mid-Atlantic: Pennsylvania, Maryland, Virginia, West Virginia, and New Jersey, with Pennsylvania (four representatives) and Virginia (three) heading the lists.  Seven of the top 10 are males, while three are females.