For industry participants, many ways to use social media 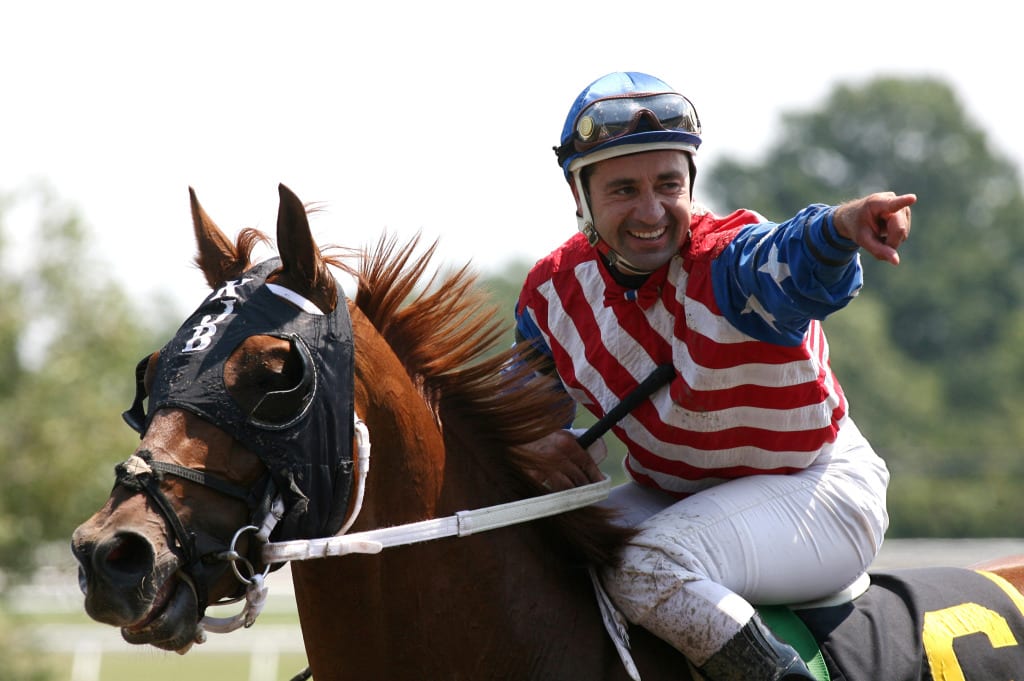 Jockey Joe Bravo has used social media to reach out to and engage with fans, an experience he says is usually positive. Photo by Bill Denver/EQUI-PHOTO.

Horse racing is not known for embracing new technology–only within the last few years have fans been able to view races in high-definition—and staying true to past performance lines, the sport’s individuals and institutions were both initially slow to establish a presence on social media.

Even now, some of racing’s biggest presences in real life—people like Todd Pletcher, Wayne Lukas, and Chad Brown—continue to resist the urge to engage online.

But following in the footsteps of relatively early adopters like trainers Graham Motion and Mark Hennig, representatives from all parts of the industry have over the last few years created social media accounts, using them to get the news, to promote their business, and to engage with fans.

Jockey Joe Bravo, a mainstay of Monmouth Park, turned to Twitter when he maxed out his Facebook account with 5,000 friends, amassing more than that number of followers since he joined in 2009. He’s discovered that it was a great way to connect with the people who raised the horses he rides.

“Every time I win a stakes, or really any race, I hear from people, and they’re so happy,” he said by phone from Florida, where he was based this winter before heading to Keeneland this month. “Tweets that say, ‘I pulled her from her mother!’ I hear from people who bred, foaled, broke the horse. It makes the world a small place.”

He also likes Twitter for the ease in keeping up with the news.

“That’s the biggest thing I love about it,” he said, “It’s the fastest news feed, and you get everybody’s input as it happens.”

When it comes to social media, the answer is foal pictures, says Anne Frederick of Mid-Atlantic Thoroughbred. Photo by Laurie Asseo.

Trainer Chuck Simon, who has been based at various Mid-Atlantic tracks but who also spent this winter in Florida, is among those weighing in on racing news as it happens. Known for strong opinions on issues like medication and stall allotments, he doesn’t hesitate to jump into or start conversations.

“I think it’s just my personality,” he said of his outspokenness. “But I do think that I’ve been able to educate some people on the realities of racing. If used properly, social media could be a great tool for the industry.”

Limiting that effectiveness, said Simon, is the lack of strong voices from racing institutions, leading to, in his opinion, a torrent of misinformation.

“Social media gives voice to that crazy guy at the back of the OTB,” he said, “the guy that thinks that this race is fixed and that race is fixed…next thing you know, other people jump on it and it gets some validity, and then some wild conspiracy theory gets legs.”

Still, he thinks that for most people in racing, being on social media is pretty much an obligation.

“It’s great for the smaller guys for informational purposes,” he said. “I have a Facebook page where I can post pictures, and that’s driven some traffic to my website; owners like it, and what’s great is that you can bring people to where you are. You can take a picture of a horse that’s doing great, post it, and bring people right into your barn.”

“But,” he added, “you don’t want to tout your horses too much or people will look to start claiming them.”

Maryland-based trainer Ignacio Correas feels a responsibility to promote not himself, but the racing industry. In his early 50s, he’s not a digital native, but he sees a need to connect with those who are.

“I might not be that young anymore, but this is what young people use,” he said. “I think we all need to invest a little bit of our time in creating new fans.”

And to do that, he tries to respond to as many queries as possible, fielding questions on both Twitter and Facebook. Like Bravo, he also uses Twitter as a news source, following racing media from all over the world.

“I don’t really have time to go to every paper every day,” he explained, “and on Twitter, you can see the headlines, pick what interests you the most, and read those articles.”

Anne Frederick is on the other side of that equation: as the registrar for the Maryland Horse Breeders Association, she was tasked with developing the social media identities of both the MHBA and its magazine, Mid-Atlantic Thoroughbred,,essentially starting from scratch and figuring out what her audience wanted to see.

“I knew nobody would follow both if we just posted the same stuff,” she said. “So I did some research on how to make social media work.”

Consulting resources like Constant Contact and Mashable, she’s tried to put what she calls “a human face” on her accounts.“If people don’t see you as human, if they think you’re just a corporate shell, they’re not really going to be interested in you,” she said.

But as valuable as her research was, it’s unlikely that any of her sources suggested what she’s found to be the most popular of her posts.

“Foal pictures,” she said without hesitation. “They never fail. We even use foal pictures in promotions, because a nice foal on green grass is exactly what we’re trying to portray, at least for the breeders. Even racing shots don’t do as well as a foal in a field.”

Raising the profile of the association and the magazine has led, Frederick said, to some increases in subscriptions, which are available for both print and online editions of Mid-Atlantic Thoroughbred.

[Disclosure: the author is a regular contributor to the magazine, which also partners with The Racing Biz on various endeavors.]

Social media can also, as Bobby Lillis and Keri Brion have found, be mined for altruistic purposes.

The executive director of the Maryland Horseman’s Assistance Fund, Lillis is the administrator of the Fund’s Facebook page, on which he publicizes events and initiatives to support Maryland’s backstretch communities; a recent post advertised the free Easter breakfast that will be served at the track kitchens at Bowie, Pimlico, and Laurel. The group has a small following of just over 100 people, in part, said Lillis, because few of the people whom the page targets have regular access to a computer.

“Most of the people who read the page are trainers,” he said. “The hope is that they’ll spread the word to the barn workers. Some of the fortunate grooms and hotwalkers have smart phones, but because the phones are pre-paid, the workers are kind of conservative about how much data they’ll use.”

Happy Retirement, Sportswriter! A stake winner and earnings close to $400,000 you definitely deserve it! pic.twitter.com/AsU67Svcv6

Lillis’ other Facebook page, The Maryland Horse Racing Industry, has a much bigger audience. Established to raise awareness about the plight of Maryland racing when it was, said Lillis, “in crisis” in 2010, Lillis changed it from an advocacy to a communications page once Maryland racing found firm footing. He posts industry articles regularly to its more than 3,000 members, seeing it as a central place where Maryland’s racing industry can check for news, aware that many people in the industry share Correas’ desire to find the news they want without having to go to multiple sites.

While Lillis uses social media to help the humans in racing, Keri Brion uses it to help the horses. As Jonathan Sheppard’s assistant, she frequently has or hears of horses whose racing careers are coming to an end, and she has used Facebook to help find them new homes. When she and her fiancé, jockey Andrew Wolfsont, were part of the retirement of the popular Sportswriter recently, she posted the news on Facebook to great fanfare.

“I can’t remember exactly when I started getting random friend requests—it was probably after I’d been with Jonathan for a little while,” she said. “For a long time, I wouldn’t accept anyone I didn’t know, then I kind of thought twice—if we have a lot of mutual friends, or if it’s a true fan that loves Jonathan’s horses. And since I’m trying to find horses homes, I want to use it for a good cause.”

That doesn’t come without its drawbacks, though. When Brion got engaged last winter, this digital native had to go old-school, informing her family and closest friends personally before announcing it to the world on Facebook.

“Some owners like to check up on their horses on social media,” she said. “Others don’t want their horses being posted to the public.”

And as she’s discovered, even the most judicious and careful social media participants can run smack into ugliness.

“People can be really nasty,” she said frankly. “When they’re passionate about something, the claws come out.”

“I used to get really worked up about it,” she continued, “and I’d want to fight back because it was so hurtful and upsetting. But I learned pretty quickly that it was never worth it.”

“It’s not always positive to have yourself out there,” he acknowledged. “You ride a bad horse, you ride a bad race, people want to chew my tail off. They’ve put their hard-earned money on the line and lost it, and they have to blame somebody.”

His understanding, though, doesn’t extend to people who are abusive.

“That’s why there’s a block button,” he said.

Fortunately, those situations are not common enough to deter social media participation.

“If I see something unpleasant or out of place, I take it out of my timeline,” said Correas. “But it has to be something really rude or really stupid, not just someone who thinks differently from me.”

Which circles back to the point of social media in the first place: the opportunity to engage and interact with people not necessarily in one’s day-to-day social circles.

“I actually like,” Correas added, “having conversations with people who have completely different points of view from the one that I have.”