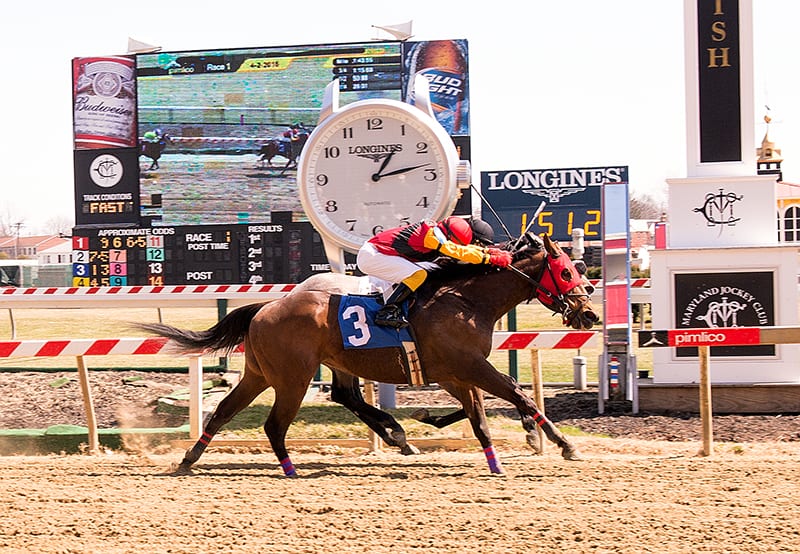 Apprentice jockey Darius Thorpe needed every ounce of his 7-pound weight allowance to eke out the narrowest of victories aboard long shot Gold Hill ($29) in the first race on Thursday’s opening-day program of the 2015 Spring Meet at Pimlico Race Course.

“I’m blessed,” said the 19-year-old jockey after recording his third winning ride of a three-month professional career. “This gives me a lot of confidence for the rest of the meeting.”

There was also good reason for Maryland racing fans to be optimistic heading into the 37-day meet that will be headlined by the $1.5 million Preakness Stakes (G1) on May 16.

On opening day at Old Hilltop, patrons were greeted with an exciting new betting menu, as well as renovation and innovation.

The Pick 5 features an industry-low 15-percent takeout, while the Rainbow 6 offers the potential to cash for life-changing payoffs as the Spring Meet progresses. Thursday’s 50-cent Pick 5 returned $4,663.90. There was no single winning ticket on the Rainbow 6.

The racing action was especially vivid on high-definition TVs in the renovated Sports Palace and Terrace Dining Room, as the installation of 150 high-tech TVs continues.

“We had a fantastic opening-day crowd and there was great energy from our patrons and staff,” said Maryland Jockey Club General Manager Sal Sinatra. “We’re very optimistic about this spring meet and the incredible events that will take place during Preakness Week. We believe Maryland racing is going to continue to grow.”

Claudio Gonzalez, the leading trainer during the recent Laurel Park meet, looks forward to continuing that success at Pimlico.

“I’m going to try my hardest to win races; the owners want that; they pay me to do that,” the former assistant to Ben Perkins Jr. said. “I have some nice horses.”

Live racing continues on Friday with an eight-race program featuring a $42,000 entry-level allowance event in the seventh race. Repole Stable’s Nonna’s Boy is scheduled to ship from New York to take on seven rivals in the six-furlong sprint as the 6-5 morning line favorite. The Todd Pletcher-trained 3-year-old colt, who won at first asking at Belmont Park last June, hasn’t raced since finishing off the board in the Grade 2 Saratoga Special last August.

Maryland-based Last Confession is rated second in the morning-line at 5-2 after breaking his maiden at first asking at Laurel in December and returning on March 19 to finish second after taking the lead into the stretch in a first-level allowance.