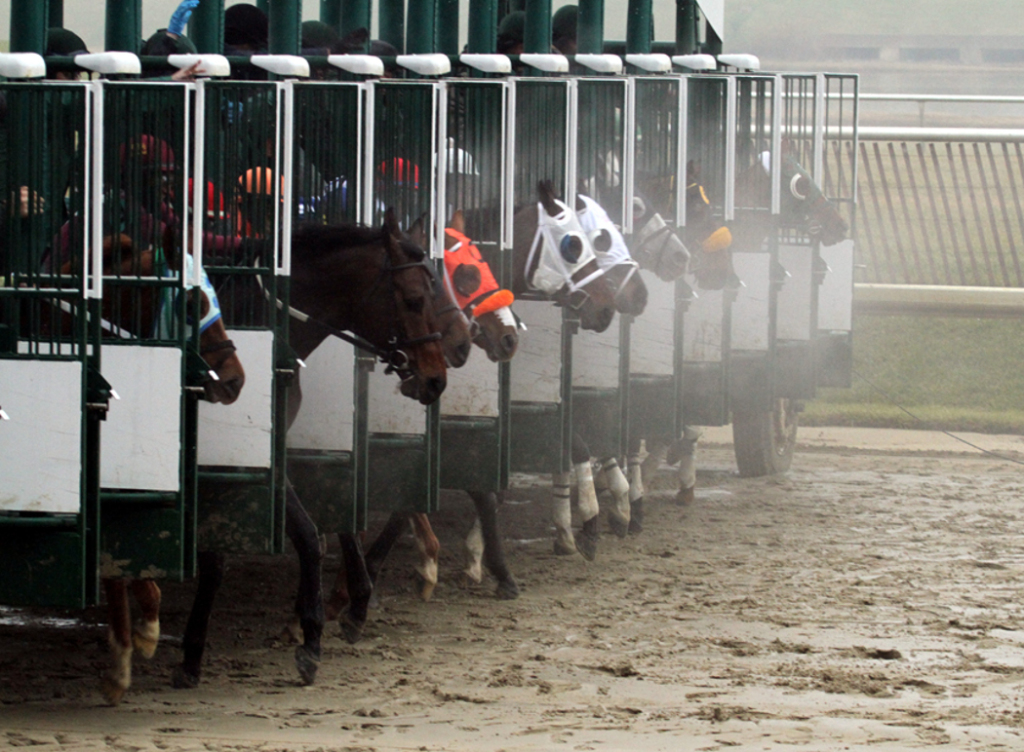 No cobalt for you guys. Photo by Laurie Asseo.

From a Racing Medication and Testing Consortium release

The Racing Medication and Testing Consortium (RMTC) approved a uniform threshold for cobalt regulation at its recent meeting, the board of directors announced today.

The cobalt threshold, which was developed and unanimously recommended by the RMTC’s Scientific Advisory Committee (SAC), will be submitted to the Association of Racing Commissioners International (RCI) for consideration as a model rule at RCI’s April meeting in Tampa Bay, Florida. Technical assistance will be provided by the RMTC to individual jurisdictions seeking to adopt cobalt regulations. The SAC is a standing committee of the RMTC, comprised of leading chemists, pharmacologists, lab directors, regulatory veterinarians and racetrack veterinarians from across the U.S. horse racing industry.

Cobalt, an element that is naturally occurring in horses, helps the body to produce enzymes like thyroxine and assists in the production of hemoglobin.  Increased levels of cobalt can enhance equine performance, many believe.

The Maryland Racing Commission approved a cobalt testing program in May 2014, but that program was designed for information-gathering to assist the Commission in developing an appropriate threshold.

Under the RMTC recommendation:

• Horses that test above 25 parts per billion (ppb) of cobalt in plasma shall be: (i) subject to a fine or a warning for the first offense; (ii) placed on the veterinarian’s list; and (iii) ineligible to race until they test below 25 ppb of cobalt in plasma (at the owner’s cost); and

• Horses that test above 50 ppb of cobalt in plasma shall be subject to a class B penalty which in most jurisdictions includes: (i) disqualification of the horse; (ii) a fine; and (iii) trainer suspension.

“This proposal is designed to protect the health and welfare of the race horse,” explained Dr. Rick Arthur, RMTC Secretary and California’s equine medical director. “The recommended thresholds provide generous allowances for vitamin and mineral supplementation but make the administration of cobalt salts impractical. Importantly, the 25 ppb total cobalt threshold in blood is comparable to the 100-200 ppb thresholds in urine being administered internationally.”

In other action, the RMTC board approved Interim Accreditation for the Pennsylvania Equine Toxicology and Research Laboratory (PETRL), after receiving a report from the Horseracing Testing Laboratories Committee – a committee which oversees the RMTC laboratory accreditation process. PETRL is the sixth laboratory accredited by the RMTC since the program began in 2011. With this action, Pennsylvania becomes the 24th horse racing state to utilize an RMTC-accredited lab and an external quality assurance program for its equine drug and medication testing services.

RMTC laboratory accreditation is one of four key components of the National Uniform Medication Program that continues to gain traction throughout the United States. The RMTC board received updates on the nationwide adoption of a Controlled Therapeutic Substances Schedule, third-party administration of furosemide, and a Multiple Medication Violation penalty system. In the past 15 months, the industry has seen major gains in the number of jurisdictions that are presently operating or soon-to-be operating under one or more of the reforms.

“We applaud the many state racing authorities and industry stakeholders around the U.S. who are working diligently toward nationwide adoption of the uniform medication program,” said Alex Waldrop, RMTC Chair. “These reforms are critical to the health and safety of horse and rider, while also creating a level playing field for horseplayers and for horsemen who race in multiple jurisdictions.”

The RMTC board also addressed the use of gamma-aminobutyric acid (GABA) – an endogenous substance that has also been inappropriately administered on race-day as a performance enhancer under the name Carolina Gold. Representatives from the SAC updated the RMTC board on the status of research into the proper regulation of GABA, including an RMTC-funded administration study and industry-sponsored analysis of more than 400 post-race samples. Based upon the final results of the SAC’s study and analysis, the RMTC board expects to finalize a recommendation concerning a normally occurring threshold for GABA in the next two weeks. The RMTC will then submit the recommended threshold for GABA to the RCI for consideration at its April meeting.

The RMTC consists of 23 racing industry stakeholders and organizations that represent Thoroughbred, Standardbred, American Quarter Horse and Arabian racing. The organization works to develop and promote uniform rules, policies and testing standards at the national level; coordinate research and educational programs that seek to ensure the integrity of racing and the health and welfare of racehorses and participants; and protect the interests of the racing public.