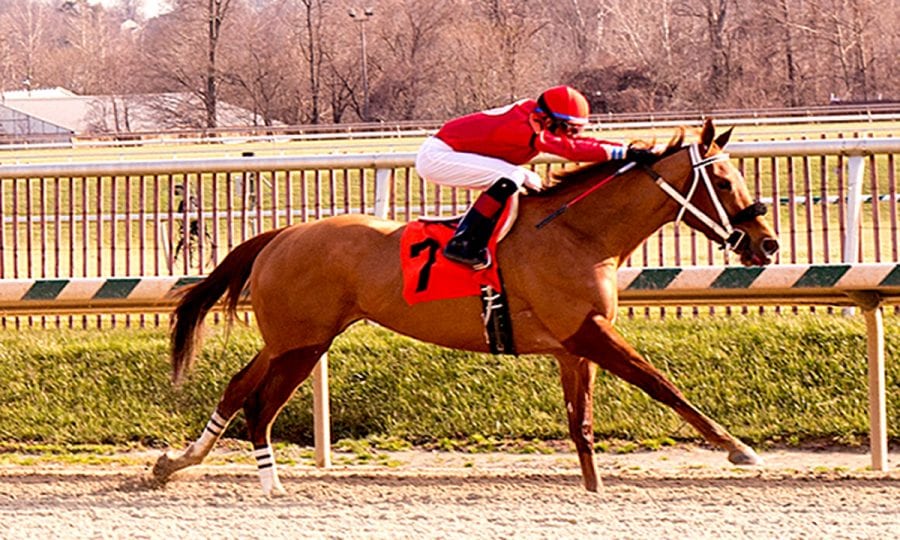 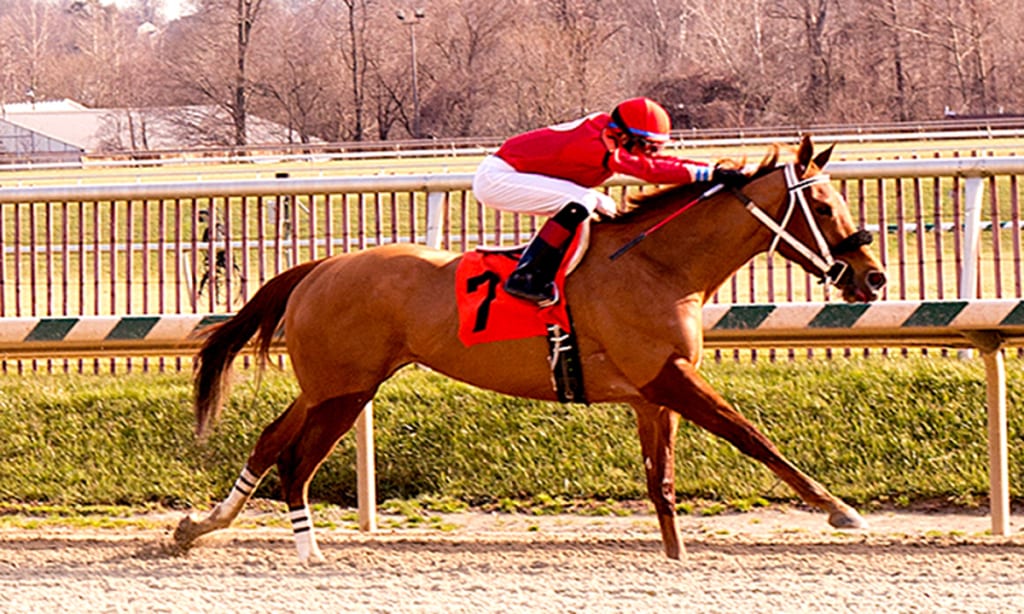 Lady Vivien, here winning on December 27, 2014, was one of the Scott Lake horses that tested positive for stanozolol. Photo by Jim McCue, Maryland Jockey Club.

Nutshell: In the first appeal of a penalty assessed under the multiple medication violation points system, the Maryland Racing Commission today denied trainer Scott Lake’s appeal of his 120-day suspension for a stanozolol positive.

The Maryland Racing Commission today heard the first appeal in the state of a penalty assessed under the multiple medication violation points system it adopted last year.  And, in a unanimous ruling, it upheld the penalties its stewards handed out, while modifying the rationale for them.

The result for trainer Scott Lake, who had appealed an early February ruling of the stewards: two consecutive 60-day penalties (for a total of 120 days), a $1,000 fine, and four points assessed against his record in the multiple medication system.

Lake, one of four trainers whose horses tested positive for stanozolol in December and January, had at the time called the original ruling “way too harsh,” and his attorney, Alan Pincus, followed that line of thinking in today’s hearing.

“We have here the first attempt to come up with a standardized punishment regime, and of course we all applaud that,” he told the Commission in his opening statement, pointing out that the new system allows for both aggravating and mitigating circumstances.

But, he said, there are “bugs that have to be ironed out.  This is one of the glitches that have to be worked out… When you are putting a new regime in, you should err on the side of mitigation.”

The case arose when two of Lake’s horses, Lady Vivien and Kylie’s Cozy Kid, tested positive for stanozolol in a seven-day period in December.  Stanozolol, an anabolic steroid formerly marketed as Winstrol but now available only from a compounding pharmacy, had been permitted in Maryland up to a threshold level until October; at that time, the state modified its regulations to come into alignment with Racing Medication and Testing Consortium guidelines that prohibit any trace of the drug in a horse’s system on race day.  That rules change is thought by some to have contributed to the spate of seven stanozolol positives that occurred in about a six-week period in December and January; in addition to Lake, trainers Hector Garcia (three positives), Jerry Thurston, and Ferris Allen (one each) all had positives called.

Following a January 28 hearing in which Lake admitted to having administered the drug — 21 days prior to racing in the case of Lady Vivien, 14 in the case of Kylie’s Cozy Kid — the stewards imposed a pair of penalties.  The first — for the underlying offense — was a 60-day suspension coupled with a $1,000 fine and four points against his record.  The second — because he had already accrued four points for a stanozolol positive at Penn National and now had eight as a result of the new positives — was an additional 60-day penalty as mandated under the multiple medication violation system.

There, said Pincus, is the rub.

Pennsylvania — like many states, including New York — he said, has not adopted the multiple medication violation system; the stewards should not have assessed points in the database and, in fact, have since been directed by the state Racing Commission not to do so.

“The Pennsylvania positive is a unique case,” Pincus told the hearing.  “The stewards gave him points they had no right to assess — no right.”

Indeed, in that case, in June, the stewards, according to Pincus, agreed with Lake’s contention that Lake’s veterinarian had inadvertently administered stanozolol to the horse No More Strippers , rather than to the horse for which Lake sought the medication, which was just returning to training.  They gave him just a $500 fine in that case, no suspension — and the four points.  Lake said he did not appeal that penalty because he did not understand how the points would affect him and because “I would have spent $5,000 fighting [the $500 fine].”

“All I’m talking about is mitigating factors,” Pincus argued.  “Here’s a glitch of someone giving points who has no right to give them.”

The state of Maryland, represented by assistant attorney general Christopher Lord, however, argued that even if one were to eliminate the points from the Pennsylvania case, the Commission retained the right to consider prior positives, including that one, in rendering its decision.

“He told us when horses came back and he thought they were knocked out, he would give them two cc’s,” Burke told the Commission.

That, in the end, is the rationale the Commission used in assessing its penalty.  The Commission upheld the first penalty, for the current offense, in its entirety.  And, though it apparently agreed that it could not use the Pennsylvania points in its decision, it included that prior offense as an aggravating circumstance to penalize Lake as a repeat offender — thus, the second 60-day term.

“There was no issue as to whether or not these were steroid violations,” said Commission chairman Bruce Quade after the hearing.  “So we took the course that we thought was consistent with our direction in the state and the intent of the multiple violation policy.”