In this second of two parts, we sit down with Stronach Group Chief Operating Officer Tim Ritvo.  In the first part, we discussed Maryland’s place in the grander strategy of the Stronach Group and the mid-Atlantic region.  In this part, we dig more into the company’s goals and plans in Maryland.

A visitor to Laurel Park these days — frontside or back — would be hard-pressed to miss what’s going on.

On the backside, the long-delayed new barns — 300 new stalls eventually — are under construction and, if all goes according to plan, will have their first equine residents by early April.

On the front side, the changes are more cosmetic, though meaingful in their own regard: new televisions in the clubhouse, changes to the way the clubhouse is oriented, and a closing off of some of the area underneath the grandstand.

Heck, there’s even a cricket “batting cage” in a previously unused section of the second floor grandstand.

And if Stronach Group Chief Operating Officer Tim Ritvo’s right, all of that is step one in the rejuvenation of Maryland racing.  So, while he and Maryland Jockey Club general manager Sal Sinatra work on the concept of building a regional racing circuit, Ritvo’s also tending to his own knitting back in Maryland.

That, he says, means three things.

“The number one thing, facilities have to be up to the greatest state of the art,” he says, going through the list. “Takeout should be reduced as we look at the long term picture. And number three is, the game has to be a level game; there has to be no cheating involved.”

On the facilities front, the changes the company is making are readily apparent.  But they’re also only the first step in what Ritvo hopes will be a much larger change.  The old model of racetracks, he suggests, doesn’t work; there’s little need for a gigantic plant like Pimlico’s anymore.  Nicer and smaller go together.

Indeed, anyone trying to figure out what the Stronach Group perceives to be the ideal modern track would do well to visit Gulfstream Park, the very model of what Ritvo calls “a scaled-down model” of a racetrack.

“You have those places that hold 100,000 [like Pimlico] that don’t make any sense anymore,” he points out, “and we have these places like Gulfstream that hold 8,000 on a regular Saturday, and you feel like you’re packed in there.”

That, he says, helps to put the excitement back in racing.

“What makes the game exciting?” he asks (and answers).  “It’s the excitement of the customer coming to the track. Even though those customers don’t overspend, or spend a lot of money on the product, the excitement of being at a busy facility.”

In the short term, that means more of what we’ve already started to see: changes that have made Laurel both nicer and smaller.  These days, the clubhouse is starting to feel  like the place to be. 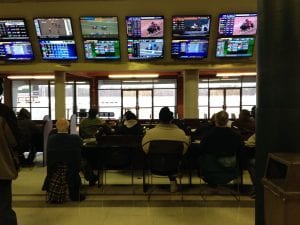 Reorienting the Laurel clubhouse and installing new televisions was one of the more visible changes the MJC has made of late.

In the longer run, Ritvo will try to emulate the company’s Gulfstream success.

“We’ve accomplished Mr. Stronach’s vision of being an entire entertainment complex [at Gulfstream],” he says.  “Racing’s still the core business — but there’s so much other things for people to do and not be bored in between races.  Those are the things we would like to work on in Maryland that we think were successful there.”

He relates the story of NFL analyst and Hall of Famer Michael Irvin, who raved on the radio about being able to enjoy a day at the races while his wife shopped and visited the casino.  Later, they met up for dinner, and both counted it as a good day together.

“We’re looking for the Michael Irvin story,” he says.  “He gets on the radio and says, ‘This is the coolest place in the world.'”

Ritvo says that the company will release a comprehensive capital plan for the facilities in the coming months but would not comment further except to say, “Everything is on the table.”

At the same time, Ritvo is aware that 92 percent of wagering is done off-track.  For most bettors, facilities improvements are largely beside the point.  For them, Ritvo says he’s looking into steps to improve television feed quality and field size.

He also points, more than once during the conversation, to takeout as a hurdle for Maryland.  The Maryland tracks rank in the bottom quarter of the Horseplayers Association of North American rankings for takeout score.  Both Gulfstream Park and Santa Anita — the Stronach Group’s other marquee properties — are in the top 20.

“Eventually, real soon, you will see a reduction in takeout in Maryland, which isn’t hard to do because, basically, we’re about 45th on the [takeout]  list and I want to get in the top 15,” he says.  “So I’ll look at those numbers and see what we need to do to get there.  If I’m in the mix of the top 15, then I’m asking [bettors] to look at my product again.”

Only nine tracks have a higher takeout on win-place-show wagers than Maryland’s 18 percent, according to HANA; and the state’s 25.75 percent takeout on three-position wagers (like the trifecta and Pick Three) is among the highest in the country.

For the longer term, Ritvo envisions an industry-wide conversation about takeout.  “The industry has to come together and say, ‘We all have to come down a little bit so we can grow,'” he says, adding that he believes the right number to be a takeout rate of “10 to 12 percent blended.”

The third step, Ritvo believes, is a cleaner game.  In recent months, the Maryland tracks have all taken a more aggressive posture on medication violations.  When trainer Hector Garcia, filling in for the suspended Juan Vazquez, incurred four positives in a short period of time, the Maryland Jockey Club asked both him and Vazquez to vacate the premises.  That was no accident, and it may not be the last time, either.

“We have to clean up the sport for the fairness of it. And the horsemen are on side with it,” Ritvo says.  “It’s the repetitive offenders, the guys who continue to violate the rules.  I think it’s time that we start to use, at all the Stronach Group properties, the private property exclusion rules.”

Ritvo, who as a trainer was a self-described “10 percent guy,” looks at the problem from both a trainer’s perspective and from a corporate perspective.

“Racing is an incredible, passionate sport, but you have to have a fair edge,” he says.  “When a guy maybe doesn’t show up a lot [at the barn] and he’s winning at 40 percent, and you’re there every day working your butt off and the best you can do is 10 percent — it’s frustrating, and that’s why the horsemen have come around and said, ‘Hey, i want these guys out.'”

In the coming months, Ritvo said, the MJC will continue to monitor trainers closely.  “We’re going to do our due diligence carefully,” he says.  “We’re not going to accuse anybody of anything.  [But] when horses are claimed and move up 25 Beyer figures every single time, it warrants an investigation.”

There’s no question that there’s a lot of work in front of Ritvo, and the changes that are apparent to the fan visiting Laurel, or the horseman on the backside, are merely the tip of what will ultimately need to be an iceberg.  But Ritvo is optimistic, pointing to, among others, Maryland Thoroughbred Horsemen’s Association president Tim Keefe and Maryland Racing Commission chairman Bruce Quade as “guys that love your sport.”

And he points to something else as cause for optimism.