On a weekend in which the Maryland Racing Media Association presented its annual Maryland-based Horse of the Year trophy to the connections of Main Sequence, perhaps it was fitting that local runners more than held their own in a half-dozen Laurel Park stakes. 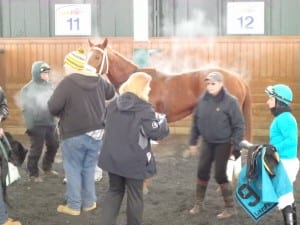 It was cold, but Gypsy Judy was hot in the Wide Country. Trainer Robin Graham is at right, next to jockey Horacio Karamanos. Photo by The Racing Biz.

Graham, who won two (including the Fritchie), and Barr (a win and a second in the George) did most of the damage.

Graham and Barr have been relatively household names on the Maryland circuit for the past two decades, but a glimpse at the Saturday and Monday programs provided a list of trainers who have ascended to the highest levels in racing. Hall of Fame trainers Jerry Hollendorfer and D. Wayne Lukas were well represented, the former sending three weekend runners — one in each of the graded events — with the latter starting Zee Bros, earlier hero of the DeFrancis Dash last fall over the same strip, in the General George. Prominent trainers Thomas Albertrani, Michael Hushion, and John Servis also sent runners for the Fritchie.

On Saturday, Graham’s Lady Sabelia sped to the lead early and never looked back, romping to a 1 1/2 length victory in the Fritchie.  Then on Monday, another Graham trainee, Gypsy Judy, registered an upset in the Wide Country for three-year-old fillies.  That’s when Barr got into the action, conditioning Savvy Street to a narrow score in the Miracle Wood for three-year-olds.  One race later, his Cutty Shark narrowly missed in the General George.

No wonder Graham described the weekend as “absolutely nuts.”

“I knew she was coming into the race perfect,” Graham said of Lady Sabelia, who has now won four straight stakes and 8 of 14 lifetime starts with career earnings approaching $520,000. “She came out of her last race great and she had been training well. Ever since the end of her three-year-old season, she’s just really matured. I think that’s really been the difference. She was even better today than she was in those other stakes. It looked like Horacio [Karamanos, the jockey] never really got after her in the lane. The best part was we didn’t have to ship. But I guess we’re going to have to now.”

While her owner-breeder, Virginia Wright, was not on hand for celebration, Virginia’s husband Frank Wright — who laughingly emphasized that he was not the owner-breeder but the husband of the owner-breeder — joined Graham and Karamanos in the winner’s circle. Wright, who will turn 90 in August, paused several times to contain his emotions before offering his feelings about the mare and perhaps the most prestigious victory of his career as an owner.

“This really was her goal all winter,” Wright said. “She’s been so good for these last four months. Robin has done an amazing job with her. We knew we would have a lot of good competition today. But she ran great. We’ve won a lot of stakes, but this is my first Grade 2. It’s special being able to win with one that you bred.”

Saturday was impressive for the locals — Eppler’s Page McKenney also scored in the John B. Campbell Handicap — but they weren’t done yet.

Savvy Street, in between, got the bob in the $100,000 Miracle Wood. Photo by Laurie Asseo.

On Monday, Graham and Barr teamed up for two firsts and a second in three stakes events.

“I think everything finally just clicked for her that last race,” Graham said. “She showed a lot of early speed that day and just kept going. She’s really bred to run on the grass. But I said to the owner [James Hibbert]: Don’t tell her yet!”

In the next two stakes races on the Monday card, local trainer Donald Barr nearly matched Graham’s feat of saddling two lucrative stakes winners, and he nearly did so in a 30-minute span on a cold, overcast afternoon when Winter Storm Octavia made a timely arrival just as the holiday card was drawing to a conclusion.

In fact, immediately after Graham sent out Gypsy Judy to capture the Wide Country Stakes, Barr saddled Savvy Street (Forest Boyce) to a mild 3-1 upset in the $100,000 Miracle Wood Stakes for three-year-olds. . The Street Sense colt rallied from just off the pace to overhaul Bodhisattva in the final 100 yards and then withstood the serious late bid of Combat Diver to prevail by a head in 1:40.36 for the one-turn mile affair. It was the second straight score for Savvy Street, who now sports three wins in six career outings and earnings just shy of $120,000 for owner Barbara Houck.

“He’s really turning out to be a nice colt,” Barr said. “I think he’ll do well going longer, but you don’t know until you try them going two turns. There’s a mile and an eighth race here [the Private Terms Stakes on March 14] that he will go into next. If he does well in that race, we’ll start looking to ship out of town. I don’t mind shipping. He’s probably not a Kentucky Derby or Preakness type of horse, but he’s just a level below that and those are still nice horses.”

Thirty minutes later, Barr suffered what might have been the weekend’s most agonizing defeat.
His rapidly improving trainee, 24-1 outsider Cutty Shark, also ridden by Forest Boyce, stalked the early pace, cleared to a 2 1/2 length lead in mid-stretch, and then… well, let Barr tell it.

Misconnect grabbed Cutty Shark in the shadow of the wire to win by a neck.

“That other horse [Misconnect] is a nice horse,” Barr said, sounding less disappointed with the loss than pleased with the best effort of Cutty Shark’s career. “That was an excellent field. It’s tough to get 12 horses like that together for a stakes race anywhere.”