Eddie Plesa hoping to hold two of a kind 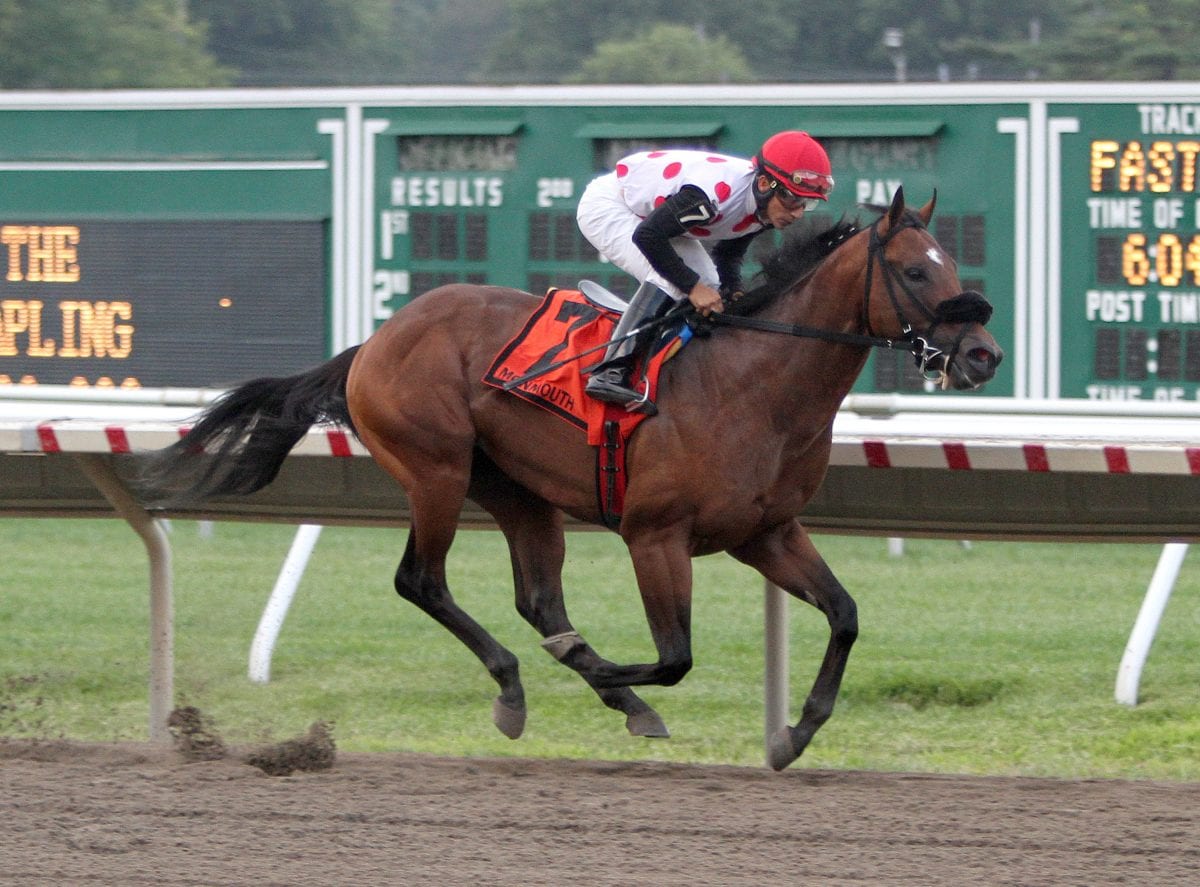 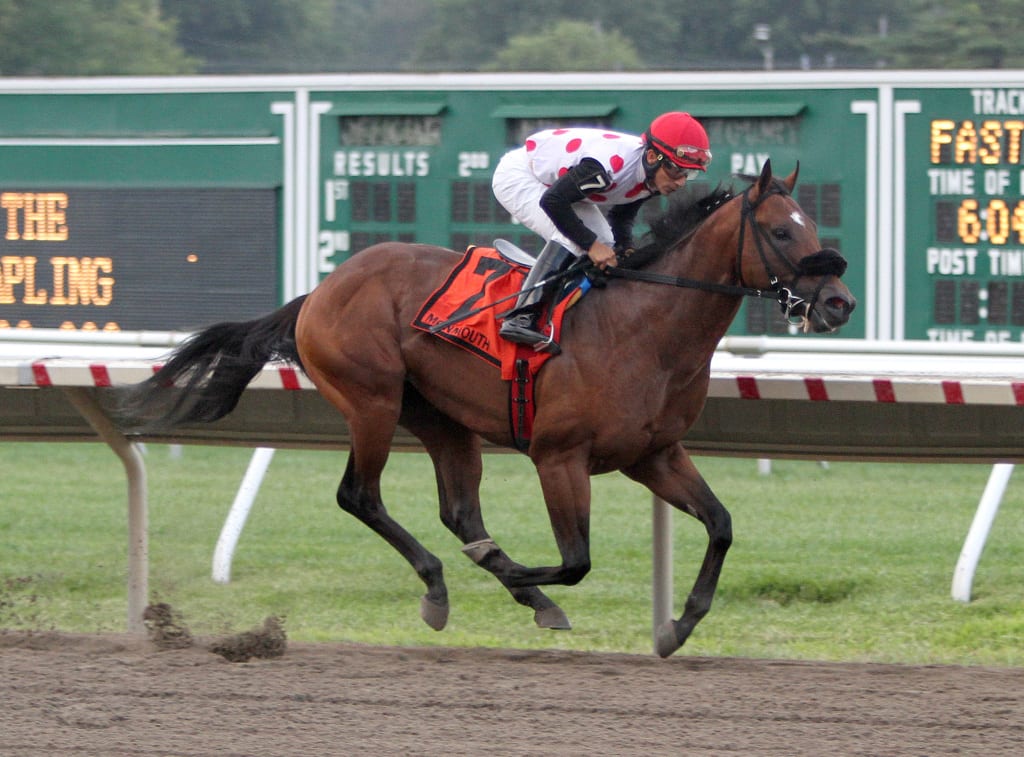 Veteran trainer Eddie Plesa, Jr. is excited about 2015, and why wouldn’t he be?  His two prized 3-year-olds, Souper Colossal and Mr. Jordan, might both be among the best young colts in the nation. 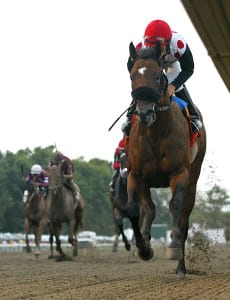 Souper Colossal won the the Sapling by more than five lengths. Photo By Bill Denver/EQUI-PHOTO

“Between the two of them, they have seven wins in eight starts with five stakes victories,” Plesa said. “It would be hard not to be excited about what we have.”

Plesa led Monmouth Park trainers in earnings at the Oceanport oval last year with over $1.1 million and was second, with 34 wins.

And if all goes according to plan, one of the two sophomores, Souper Colossal, might be running for the roses on the first Saturday in May.

“I would say that’s a direction we’re pointing for,” said Plesa, who has his stable of horses training at Gulfstream Park in Florida in preparation for the 2015 thoroughbred season. “We’re moving slow and cautious, but I think there’s a good chance he (Souper Colossal) will be in Kentucky. He has a big chance if he handles the building blocks toward the top rung of the ladder well.”

Neither the Texas Glitter nor the Swale offers the horse precious Kentucky Derby points, but that doesn’t bother Plesa.

“We’re looking to do what’s right for Souper Colossal,” said Plesa, who won the Grade 1 Woodward States last summer with Itsmyluckyday. “If we’re lucky enough to win the Swale, and if he’s sound enough, then he’ll be in the (Florida) Derby.”

Souper Colossal won three times as a juvenile, including the Tyro and Sapling Stakes at Monmouth.  Plesa entered Souper Colossal, a $350,000 purchase in the 2013 Fasig-Tipton Saratoga yearling sale by Live Oak Plantation, in the Breeders’ Cup Juvenile last November at Santa Anita Park, a race in which the colt finished seventh after dueling for the lead through very fast fractions.

“It was my fault,” Plesa said. “He trained astronomically fast and it took something out of him for the race.  We didn’t have the best of trips, but that was no excuse. He’s got a wonderful pedigree (by War Front out of the winning Kingmambo mare Soaring Emotions). We’re going to do what we can do with him.”

So far, Plesa feels good about his colt’s development.

“If you can resist doing what the point system indicates and do what’s best for the horse, things will work out,” Plesa said. “I know the ownership agrees. The route we’re taking might be unconventional, but it’s the path we’re taking.”

As for Mr. Jordan, the majestic grey by Kantharos-Miss Skeetd, by Cloud Hopping, he was purchased for $155,000 from last year’s Ocala Breeders Sale of two-year-olds in training  by an ownership group that includes Plesa’s wife, Laurie, David Melin, and Leon Ellman.  Plesa is a little more cautious, considering that Mr. Jordan underwent knee surgery last December after he won both the Juvenile Sprint Stakes and the Smooth Air Stakes, both at at Gulfstream Park West (formerly Calder) and both in convincing fashion.

Though Mr. Jordan was not named after the basketball superstar — but instead the grandson of one of the owners — Plesa likens him to the NBA great. 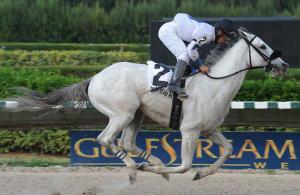 Mr. Jordan was sidelined last Dec. 19 with an injury that was first believed to be a torn ligament. But after further examination, veterinarians determined that the injury wasn’t as serious as what was initially thought. Mr. Jordan underwent equine surgery Dec. 28 and has been on the mend ever since.

“He’s back in the barn,” Plesa said. “He’ll have a full workout by the beginning of next week. He’s actually ahead of schedule. You really can’t tell anything was wrong with him. It’s like he took a five-week vacation and came back.”

Plesa said that the goal is to have Mr. Jordan back on the track for the beginning of April.

“We have no races picked out for him,” Plesa said. “But he’s still far behind Souper Colossal in terms of training.”

Plesa has enjoyed a ton of success in recent years, including the tale of Itsmyluckyday and multiple graded stakes winner Best of the Rest, who won 16 of his 32 starts and earned more than $1.4 million.

“We’re very blessed to have horses like Souper Colossal and Mr. Jordan,” Plesa said. “Any time you have three-year-olds like that, you feel blessed. They’ve done everything we’ve asked of them. It should be a great year for both of them.”