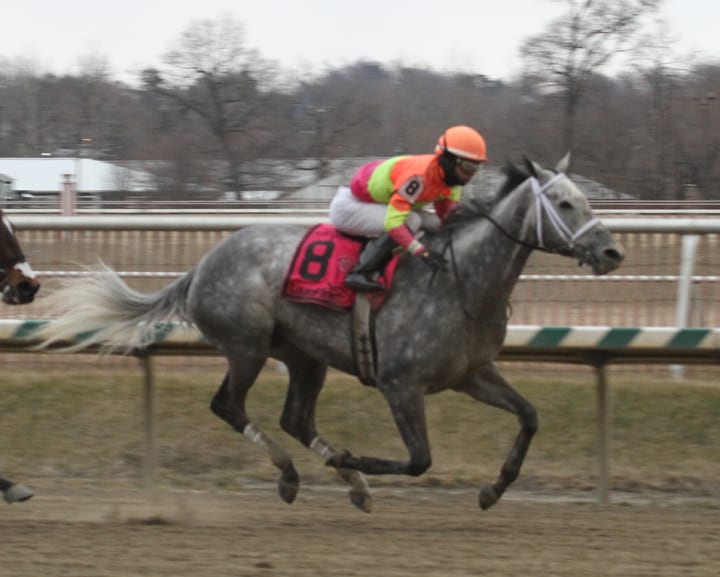 Jim and Susan Hill’s Lunar Surge was the beneficiary of a ground-saving trip under Jose Ortiz Saturday at Laurel Park on her way to victory in the $100,000 Maryland Racing Media Stakes, a 1 1/8-mile route for fillies and mares.

As South Florida invader Flores Island set the pace, Lunar Surge was in last place in the 10-horse field after the first quarter of a mile and advanced steadily while never venturing away from the rail. Flores Island was loose on the lead while setting comfortable fractions of 24.36 (seconds), 48.88, 1:14.34 and 1:39.85 during the first mile and appeared to be on her way to victory under Gulfstream Park-based jockey Edgard Zayas. However, Lunar Surge, the 5-2 favorite, had plenty of energy in reserve due to his ground-saving journey and kicked in late to post a length victory.

“She broke well but got in trouble on the first turn. I had to relax her a bit so I took her back and she came out of it good,” Ortiz said. “I tried to save all the ground I could. I had an option to go four or six wide or wait and take a chance on rail. My move paid off. When I cut in and asked her for run, she took off.”

Flores Island held second money by three-quarters of a length ahead of Luna Time, the 3-1 second choice ridden by Sheldon Russell.

Lunar Surge, who finished third in the Maryland Media Stakes last year, ran 1 1/8 miles in 1:52.41 to capture her first stakes victory, which was also her first win in nearly 11 months.

“We brought her here yesterday because last year when she finished third in this same race, she got nervous in the paddock when we brought her down the day of the race. She just needs to come here and be pampered,” said assistant trainer Blair Golden, who saddled the Kentucky-bred mare for Weaver. “We galloped her this morning after we decided to do it right this time.   She has had a good run of bad luck.  She was always beaten by small margins.”