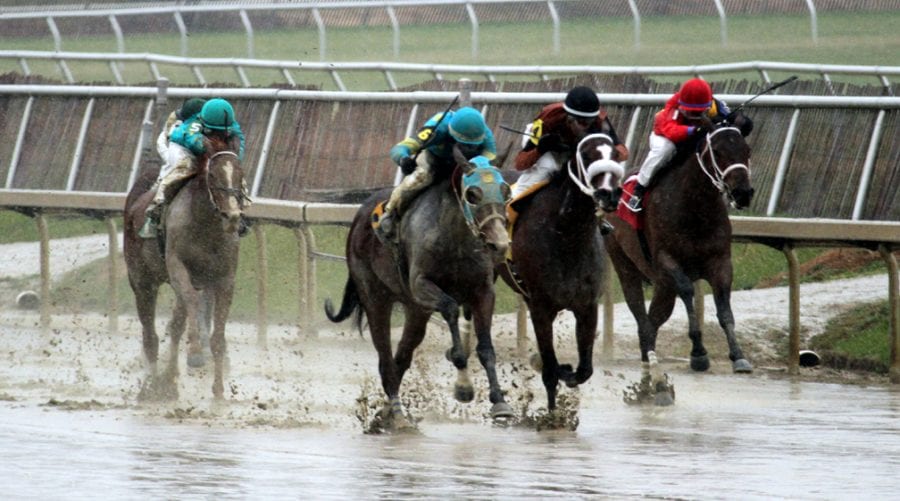 That changed Sunday when the Maryland Racing Commission stewards assessed fines and penalties to three trainers for a total of seven offenses, primarily for the presence of the anabolic steroid stanozolol in horses.  Formerly marketed as Winstrol, stanozolol is now available only as a compounded substance.

Trainers Hector Garcia, Scott Lake, and Ferris Allen received penalties ranging from 30 days with 15 suspended, for Allen, on up to more than a year in the case of Garcia, who had been training horses in place of Juan Vazquez, himself in the midst of a long suspension.

Separately, Maryland Jockey Club vice president and general manager Sal Sinatra told The Racing Biz that the MJC, which owns Maryland’s two major racetracks and the Bowie Training Center, had “asked Garcia and Vazquez to leave.”  The men, who train out of Pimlico, have two weeks to clear their barn, Sinatra said.

Under the multiple medication violation points system, trainers receive not just fines and suspensions for positive tests but also points against those records. Once a trainer has accrued three or more points, any medication penalties s/he receives are increased based  on the number of points s/he has accrued.

Garcia received the lengthiest suspension – all told, more than one year – after three of his horses tested positive for stanozolol and a fourth tested positive for the sedative xylazine. The first of Garcia’s violations, with the horse Today’s Man, occurred on December 6, while the most recent, with Conflicting Report, took place January 17.

The sequence of four positives resulted in the imposition of 10 points against Garcia’s record and, thus, an additional eight months’ worth of suspension.

Garcia, who described himself in a phone interview as “very, very surprised” by the penalties, said that he had “never seen anybody in my barn use” stanozolol.  But he said that, while he had not yet made up his mind, he did not think that he would appeal the decision.

Lake had two horses test positive for stanzolol within the space of a week. Lady Vivien had a positive test after winning on December 11, and Kylie’s Cozy Kid followed up with the same offense seven days later. However, because the second positive came before he had been notified about the first, the stewards chose to view those as one offense, rather than two separate offenses.

Lake said he “absolutely” intends to appeal the ruling, which he called “way too harsh.”

He also conceded to having “mixed feelings” about the point system, acknowledging on the one hand the benefits to racing of penalizing repeat offenders but pointing out on the other hand that the point system made no differentiation between a trainer with a small string and a trainer who, as he does, might make hundreds of starts or more in a given year.

Allen received a $1,000 fine and a 30-day suspension, with 15 days suspended if he does not receive another positive in the next 36 months.  Richard’s Gold, a horse he trains for his own Warwick Stable, was disqualified after winning on December 13 after tests revealed the presence of stanozolol.

[pullquote]”I think it was a little harsh, but there’s nothing I can do about it.” — Hector Garcia[/pullquote]Allen said in an interview that stanozolol had been administered to the horse 36 days prior to the race “on the advice of the veterinarian.”  Another source with knowledge of the situation confirmed that version of events.  Allen has appealed the ruling.

When stanozolol was commercially available, it was generally permitted in horses under threshold levels that typically meant a 30-day withdrawal time.  The Racing Medication and Testing Consortium recommended in late 2013 that, because of the wide variation in concentration levels of the compounded drug, states eliminate the threshold levels, essentially meaning that any trace of it in a horse triggers a positive.

Maryland adopted the no-threshold rule, effective in October 2014.  Many veterinarians, however, continue to recommend the use of stanozolol for therapeutic purposes.

Theories abound as to the cause of the sudden spate of offenses after a long period of quiet.  Some point to the new regulation as the culprit; others believe that the lab has changed its testing protocols, though Commission sources deny that.  Still others suggest that the high-profile introduction of new medication rules last year had a “scared straight” effect on some trainers, which has worn off over time.