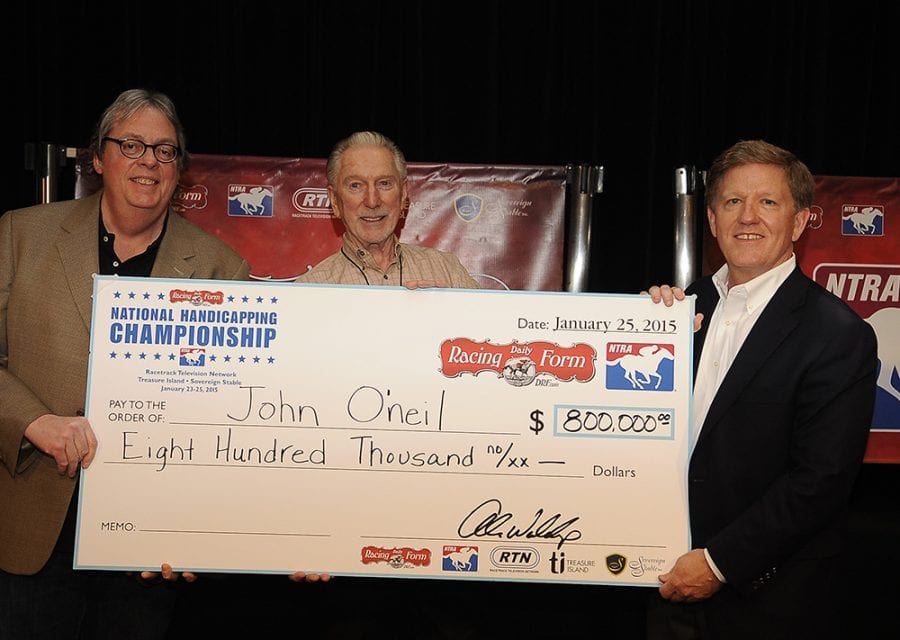 The 74-year-old O’Neil amassed a winning score of $327.20 over the three-day tournament from 47 mythical $2 Win and Place bets – 15 each on Friday and Saturday, 10 in Sunday morning’s Final 50 contest and seven in the climactic Final Table contest exclusive to the overall top 10.

O’Neil was the NHC two-day leader at the end of Saturday’s races but lost the lead toward the end of the Final 50 contest that led to the Final Table. In the seven mandatory races that made up the Final Table, however, O’Neil cashed in four of them. Three of them were winners – Huntstown ($6.40) in Tampa Bay Down’s tenth race,  Main Man Mike ($14.40) in Gulfstream Park’s 11th, and Aperfectdaytofly ($7.40) in Santa Anita’s seventh.

“It was short-priced horses that got me there but that’s what we had today,” O’Neil said. “Thank God for very few bombs.”

O’Neil was introduced to handicapping on visits to the old Jamaica Race Course in Queens in the 1950s.

“My brother took me one day when I was 14 or 15 and I’ve been doing it every day since,” O’Neil said. “It’s been a journey to get here, believe me. This probably makes me even after a lifetime.”

The top three NHC finsihers, and four of the top five, qualified as a result of finishing among the top 150 on the NHC Tour, a distinction which earns guaranteed entry to the NHC.

O’Neill is a small-business owner on Long Island.

“We work 60, 70 hours per week pushing trucks and asphalt,” he said. “This will make it a little easier.”

The official Top 10, with final bankroll (and prize):

Kinchen completed the Final 50 stage with two entries in the top 10 but each individual is permitted only one entry at the Final Table. Kinchen’s highest bankroll carried over to the Final Table while the “other” entry was automatically good for 11th-place money ($25,000).

Troop was attempting to become the first two-time NHC winner. His eighth-place finish is the highest ever by a former champion.

By virtue of his victory, O’Neil also automatically earns an exemption into next year’s NHC finals.

The NHC was held for the fourth straight year in the Treasure Island Ballroom.