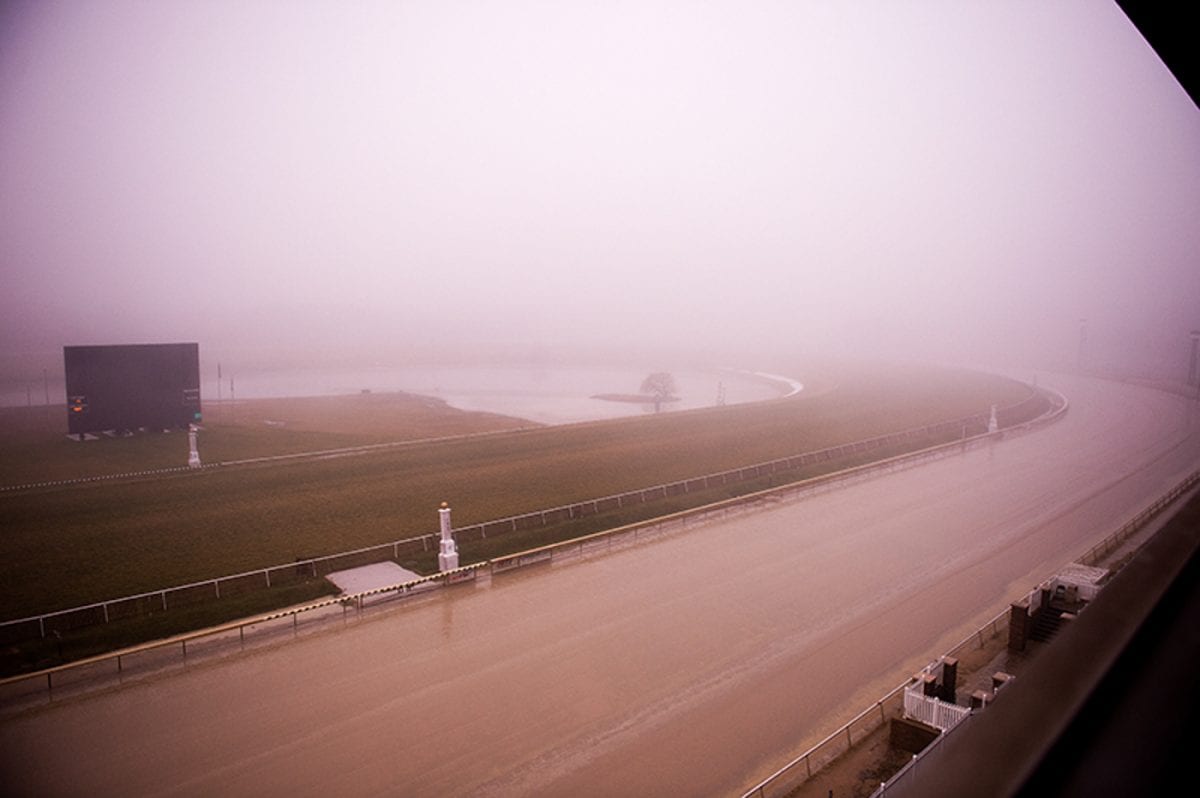 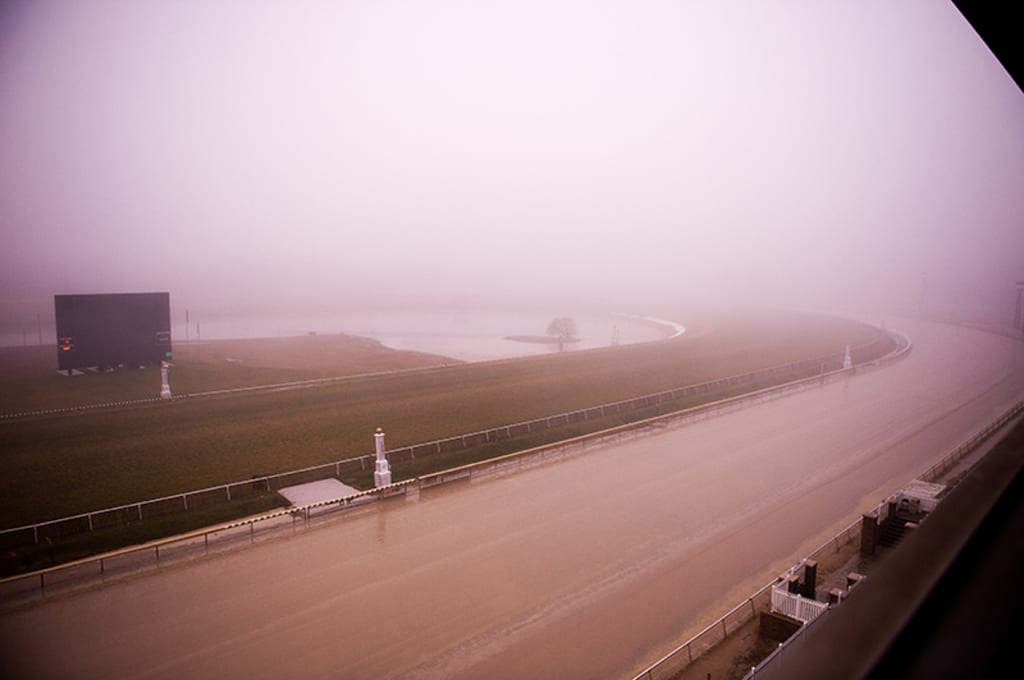 Just prior to Christmas, we interviewed new Maryland Jockey Club Vice President and general manager Sal Sinatra in his office at Laurel Park.  Today, in the first of two parts, we discuss his goals of generating increased handle by drawing attention to the Maryland product and boosting attendance at the tracks.  Tomorrow, we discuss the racing product itself and where the Bowie Training Center fits in.

If there’s a word that describes how Maryland racing fans and horsemen have felt during their years as a Stronach Group track, it might just be this one: “neglected.”

While Santa Anita and Gulfstream get millions for renovations, Pimlico gets a splash of red paint. 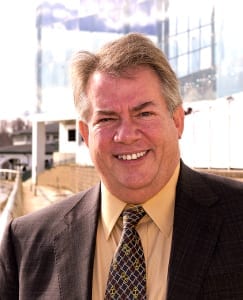 While Gulfstream gets a $30 million horse statue, Laurel doesn’t get the money to obtain a slot machine license.

And Bowie?  Probably best not to go there.  Horsemen love the racing strip and horses love the quiet, but disrepair is too kind a word to describe the barn area.

But the last month has seen changes great and small that, perhaps, presage a new corporate focus on the Free State’s racing.

Among them: the Maryland Jockey Club has kicked off the long-delayed work on new barns at Laurel; introduced new wagers; and will resume Sunday racing in February.

None of these changes is earth-shaking.  Yet, taken as a group, they may carry greater meaning.

“I know a lot of promises were made over time, this place in particular,” Sinatra said in an interview just prior to Christmas.  “But I think, they’ve finished up with Santa Anita and Gulfstream, they’re doing well. Now the focus is on Maryland.  And that’s kind of where we’re gearing.”

Sinatra, who replaced the widely respected Tom Chuckas in a move that caught Maryland racing unawares, wore a Maryland state flag tie to the interview, a gift from his former colleagues at Parx Racing.  That was no coincidence.

“I was excited to come and I’m even more excited now that I’m here,” Sinatra said.  “I look at Maryland as history, as generations of horsemen.  I look at it as a horse state – horse racing and horse-friendly state.  To me, particularly Pimlico but also Laurel, are part of this state, and everybody wants to see it succeed.  And when I say everybody, it’s all walks — it’s not just the people involved in the business.”

Key to that success, says Sinatra, are increasing handle and “getting people in this building.”

Neither, of course, is easy.

Maryland’s wagering handle declined in 2014, part of a broader national trend which has seen handle drop by more than 30 percent in the last decade.  And the days when a track could simply open the doors and watch the turnstiles spin are far in the rearview mirror.

But one advantage that Maryland has — which now may be brought to bear — is its corporate siblings, Santa Anita and Gulfstream.

“We’re trying to use assets from the other two [tracks] — people, manpower, whatever — to right the ship,” Sinatra said.

That might mean, for example, that you’ll see Maryland racing analyst Gabby Gaudet on the Sunshine Millions broadcast — a way to develop her following and draw more eyeballs to the Maryland product.

Those sorts of synergies, he hopes, will help to revitalize interest in the local product.

He’s looking, as well, to make small tweaks to the product that might help it stand out.  That was behind the track’s shifting its post time from 12:35 to 12:30 — which meant that it no longer started at the exact same time as corporate sister Gulfstream Park.

It was also behind the introduction of new wagers.  Sinatra says that he’ll be keeping an eye on the track’s carryovers and may take some shots at guaranteeing minimum pools — another proven tool to generate wagering interest.

And, he says, he and Stronach Group Chief Operating Officer Tim Ritvo are working on bolstering Maryland’s presence on both corporate partner HRTV and competitor TVG.  “We need to get it out there,” he says.  “You’ve got to be on TV now.”

Sinatra also speaks enthusiastically about rebuilding attendance at the tracks themselves.  That’s for one very practical reason: “Simulcast dollars aren’t the same as in-house dollars.”

In other words, the track and horsemen receive more money when a bettor wagers at the track than when s/he does so via computer.

How to do that?

The move to Sunday racing — when people are off work and free to go to the track — is one step.  More marketing and events, he says, will be another step.  Focused efforts to bring younger people to the track are a third.

It’s also true that the aging facilities themselves are an issue.  Grand plans for the renovations of Laurel and Pimlico. unveiled with great fanfare in the past, have not come to fruition.  But Sinatra indicated that that will change in the coming months and years.  Look for Pimlico to be the focus of those efforts.

“The goal is to make it a true facility similar to Gulfstream,” he explained, “where it’s a facility you can use it for other things, where people want to be after dark… That place [Gulfstream] is alive at night.  If you have a nice facility, you have other things, people will come to your building.”

Much has occurred in the last couple of years to give Maryland racing a more solid foundation from which to build.  Bringing it back to its historic position in the industry will be no small challenge, but it’s a challenge Sinatra relishes.

“It’s just refreshing to me,” he says.  “I’m a horsemen-friendly person, been through a lot of aspects of it, and I’m hoping I can help.”