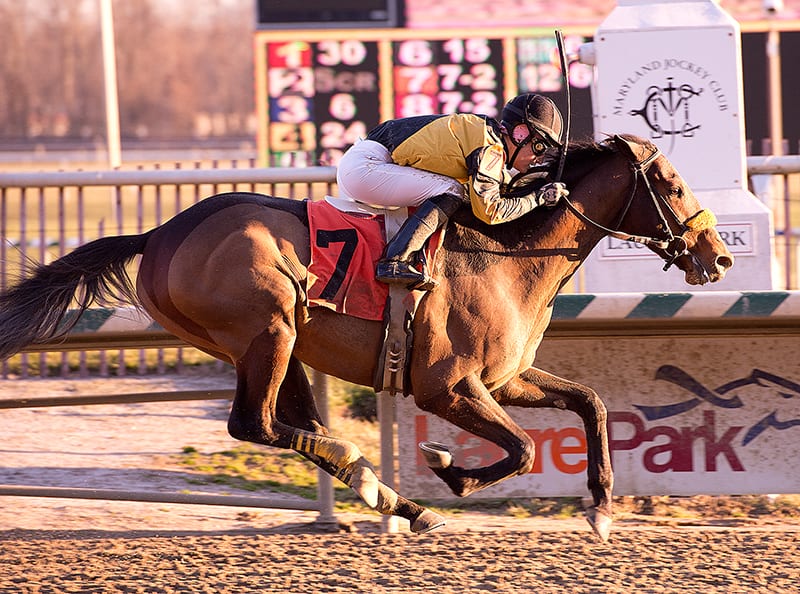 Forest Boyce traveled from her Fair Grounds winter base to Laurel Park today for one major reason: to ride Ghost Bay in the $125,000 Maryland Juvenile Futurity.

That proved to be the right call, as the son of Ghostzapper rallied from last to post a solid, 4 1/2-length score.

“I love him,” Boyce said in the winner’s circle after the race.  “He’s just got the right attitude.”

Ghost Bay, who’d rallied from far back to be third going six furlongs in each of his first two starts, seemed to relish the added ground in today’s seven-furlong event.  After a rough start today, he found himself in last place, double-digits behind early leader Silver Bop.

“I thought he would be (closer to the pace) going seven-eighths,” said Larry Murray, who trains the Maryland-bred for owner-breeder Howard Bender.  “I thought he’d be a little closer just because of experience, but I thought that the last time, too.  I didn’t realize he had so much trouble out of the gate.”

Ghost Bay picked his way forward after his early troubles, then found himself stalled behind runners and needing a seam as the horses neared the lane.

“At the quarter pole, I thought, ‘You’re going to have to pull a rabbit out of your hat,'” said Murray.

But then Sunrise Sunset drifted out, providing the opening Ghost Bay needed.  He exploded through the hole and left the field in his wake. 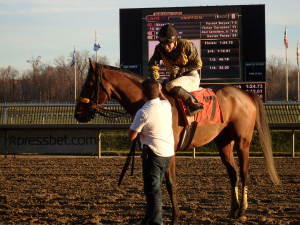 Forest Boyce aboard Ghost Bay. Photo by The Racing Biz.

“The eight (Sunrise Sunset) kind of did the work for me, and it worked out well,” said Boyce.

Ghost Bay now has a win and two thirds from three starts with earnings in excess of $70,000.  It’s a safe bet that longer races are in his future.

“We’ll make sure everything’s a go and not get in a hurry with him,” said Murray. “It’s nice to have a nice three-year-old.”