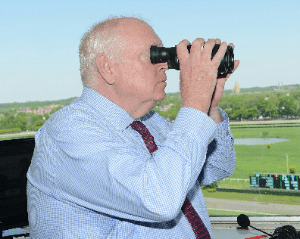 Tom Durkin’s eagle eye was a great help in calling some top races. Photo by NYRA.

Durkin, 64, who retired on August 30 at Saratoga Race Course in Saratoga Springs, N.Y., after a 43-year-career, will be presented the Award of Merit at The 44th Annual Eclipse Awards dinner and ceremony on Saturday, January 17 at Gulfstream Park Racing & Casino in Hallandale Beach, Fla. The Eclipse Awards are presented by Daily Racing Form, Breeders’ Cup and The Stronach Group and produced by the NTRA.

“This is quite an honor and quite a surprise,” said Durkin upon learning the news. “The award has never been given to a track announcer before, and to be singled out when you consider all of the great announcers who preceded me like Fred Capossela, Joe Hernandez, Chick Anderson and Dave Johnson, this is quite a distinction. Getting my first job calling races at Florida Downs was a dream come true, but I never imagined my career would take me where it did. A lot of people took a lot of chances to hire a guy named Tom Who? I have them to thank and anybody whoever bet two bucks.”

“Tom Durkin has been one of the most remarkable and dynamic voices in our industry for more than a generation,” said Alex Waldrop, NTRA President and CEO. “His uncanny ability to tell a story, build it with drama, tension and excitement through his more than 80,000 race calls was a tremendous gift to all of us who treasure horse racing. On behalf of all of the Thoroughbred industry, we congratulate Tom on his outstanding career and for making our sport a much richer and brighter experience for all.”

At early age Durkin set his career goal to become a track announcer. “I never really wanted to be anything else,” Durkin recalled. “I was just a kid on the west side of Chicago. And it wasn’t the least thing practical. It turned out far more than practical. How many people go to a job they really like?”

Born in the Austin District of Chicago’s west side, Durkin idolized Arlington Park’s renowned track announcer, Phil Georgeff, and the energy and excitement he brought to his craft. (Years later, Durkin wrote the forward to Georgeff’s autobiography.) A theatre major at St. Norbert College, Durkin’s career behind the microphone began at country fair meetings in Wisconsin in 1971 before his first job at Florida Downs, now known as Tampa Bay Downs. He worked stints at Balmoral, Quad Cities and Cahokia Downs in the Midwest before moving east to call the harness races at The Meadowlands in New Jersey. More big breaks soon came, starting with John Brunetti hiring him to call the races at Hialeah in 1981. Within three years, Durkin was tabbed by NBC Sports to call the Breeders’ Cup, an unprecedented program of $10 million in purses spread over seven races, all televised live by NBC in a four-hour broadcast.

“That first Breeders’ Cup was surreal,” Durkin recalled of the 1984 inaugural running at Hollywood Park. “Every race had a minimum of a $1 million purse.  But the important thing was that for the first time championships were being decided on the racetrack. It crystalized when Chief’s Crown crossed the finish line in the Juvenile and I said ‘A champion is crowned, it’s Chief’s Crown.’”

A string of successes would continue into the next decade when on Aug. 29, 1990 Durkin became the track announcer for the New York Racing Association venues: Aqueduct, Belmont Park and Saratoga. In a decade marked by expanded simulcast signals across North America, Durkin’s calls could be heard on a more regular basis. His work also included calling races on ESPN and NBC broadcasts throughout the year, including trips to the Irish Derby and the Prix de l’Arc de Triomphe. When NBC grabbed the rights to the Kentucky Derby, Preakness Stakes and Belmont Stakes, Durkin became the television voice of the Triple Crown beginning in 2001 and held that position for 10 years.

“Tom is more than deserving of the Award of Merit,” said six-time Eclipse Award winning trainer Todd Pletcher.  “He’s been such a mainstay in our industry for so many years and will clearly go down as one of the best race callers in history, if not the best. He’s called most of my biggest career wins, including the 1998 Acorn Stakes with Jersey Girl, which was my first grade one win, and all three of our Triple Crown victories.  I would have to say the most memorable for me was his call of the 2007 Belmont Stakes when Rags to Riches triumphed to become the first filly in 102 years to win the race.”

Durkin also has contributed time to some of the hardest working and unsung people in racing. For 17 years, he has served on the board of the Backstretch Employee Service Team (B.E.S.T.) which provides medical care, counselling and other services to backstretch workers at the New York Racing Association tracks. Fans could hear Durkin call a race live from his booth in exchange for a donation to B.E.S.T. Approximately $200,000 was raised over a 10 year period. Tom also spent many Thursday evenings at Saratoga calling Bingo games in both Spanish and English for the backstretch workers.

In an emotional farewell retirement ceremony following his call of the Spinaway Stakes at Saratoga on August 30, Durkin stood before a rain-soaked audience in the winner’s circle and said: “There is one person that is completely responsible for this wonderful life that I’ve had the privilege to live in horse racing. That person is here in Saratoga today. Right now he’s in the backyard sitting at a picnic table under a pine tree looking at this image on the television. She’s at top of the stretch leaning over the rail, and she’s in a box seat or at a simulcast center in Syracuse or at a track in Ohio or in front of a computer in California. The person I owe an inexpressible gratitude is you, the racing fan, the horseplayer. Thank you.”

The Eclipse Awards, presented by Daily Racing Form, Breeders’ Cup and The Stronach Group, are bestowed upon horses and individuals whose outstanding achievements in North America have earned them the title of Champion in their respective categories. Those awards are voted by NTRA, Daily Racing Form and the National Turf Writers and Broadcasters (NTWAB). Awards also are given to recognize members of the media for outstanding coverage of Thoroughbred racing.