Flamingos, a goat, and Eighttofasttocatch 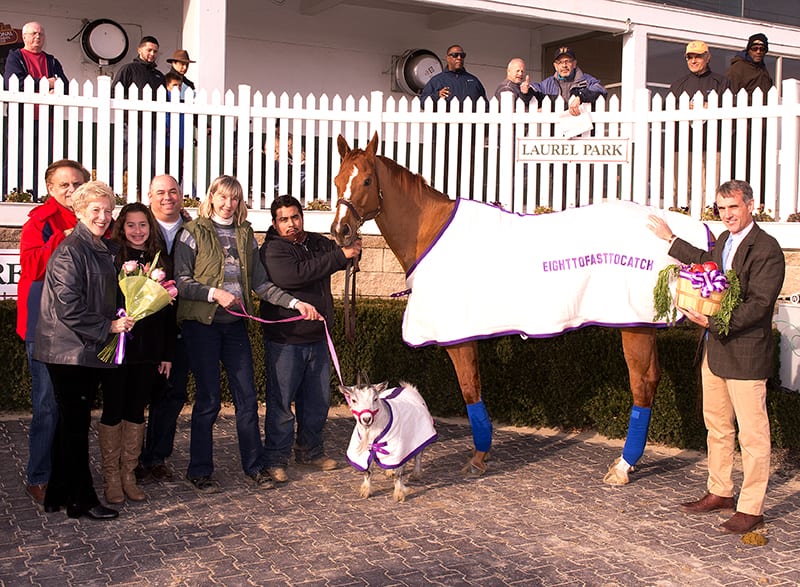 And so it was: a retirement ceremony for a horse, with the show stolen by a goat.

A day which entailed no risk — no race to run, no horses to beat — in which superstitions kept coming up.

They came to Laurel Park Saturday to praise Eighttofasttocatch, the chestnut Maryland-bred owned by the late Arnold Heft and his wife Sylvia, who was retired after winning his fourth consecutive Jennings Handicap last Saturday.

But they ended up praising ‘Catcher’s best friend, the short, fat goat Gigi.

“It’s not just a gimmick,” trainer Tim Keefe insisted when asked about Gigi after the ceremony.  “She really does settle him.”

But it lent the event a levity that, upon further review, struck just the right note.

“This is a Sylvia Heft, Eighttofasttocatch tie and shirt,” Keefe explained patiently.  “This is flamingos, it’s purple and pink and white.  This was my getup.  I changed the jacket once in a while, but otherwise this was it.”

“So you’re not superstitions at all,” a reporter suggested.

“Oh no, not at all,” Keefe responded with a laugh.

There was Gigi, striking a pose.

Where there’d been tears after ‘Catcher’s Maryland Million Classic win in October, today there was laughter.

It’s better that way; horse racing is, in the end, about the good times.

And Eighttofasttocatch — who won 17 times in his career and earned more than $1 million — delivered plenty of those. 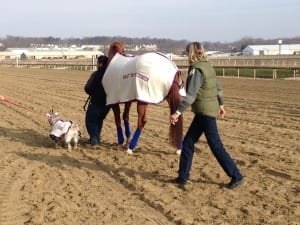 Yet Keefe reached back, back past the three Classics, the four Jennings Handicaps, all the stakes, all the wins, for his fondest memory.

Feldman — Heft’s son-in-law — and his wife Harriet (Heft’s daughter) reached back even farther.

“We both go back to when my father started as partners with Hal Clagett,” Harriet Feldman said, recalling horses like Pulverizing and Little Bold John.  “It’s hard for us to conceive that they’re actually comparing this horse to Little Bold John.”

But they are comparing the two, and with reason.  Decades apart, both horses developed strong fan followings on the strength of multiple seasons at or near the top of the local horse population.

‘Catcher’s retirement means the conclusion of the 26-year run of Heft Stables.  “The end of an era,” Marty Feldman called it.

He hadn’t lived to see all those dreams fulfilled.  But those closest to him suspected that, in a sense, he had seen them all the same.

“It’s just a shame it was nine months too late for my father to see it happen,” Harriet Feldman said.  “But I’m convinced he’s here.”