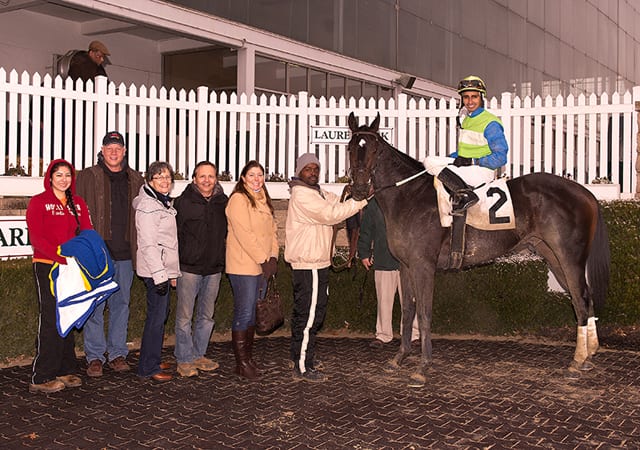 Mike Trombetta saddled three winners Thursday afternoon at Laurel Park to move into a tie atop the fall standings. The 48-year-old now has 23 winners at the central Maryland track since the meet began in September, the same as Claudio Gonzalez.

“Good day,” Trombetta said. “It looked like all had chances. We had one of the best October’s in a long time but went cold as ice in November (1-of-34 at Laurel) but now it is starting to cycle back. We’ll keep plugging away.”

Coldfeetwarmheart ($5.40) took the opener for the Baltimore native, who has now won six races from 14 starters during December.

Souper Lucky ($3.80) proved best in the $47,000 allowance feature, winning by 1-3/4 lengths with leading rider Trevor McCarthy, in his first start since a solid showing in the City of Laurel Stakes last month.

“He has been pretty happy this week,” added Trombetta. “There was a real hot pace in the stakes race and Trevor had to use him early. He earned a 93 (Beyer Speed Figure) and finished sixth. That doesn’t happen much around here.”

T Sizzle ($4.40) was a convincing winner for Trombetta in race 4. The son of Pure Prize moved to the lead at the top of the stretch and won by 2-1/4 lengths over six other maidens. The gelding had four runner-up finishes in seven previous starts since his debut at Pimlico in May. T Sizzle is the nickname of Baltimore Ravens star LB Terrell Suggs.

“T Sizzle has been knocking down the door all season,” Trombetta said. “Things went his way today and he ran like he is capable.”