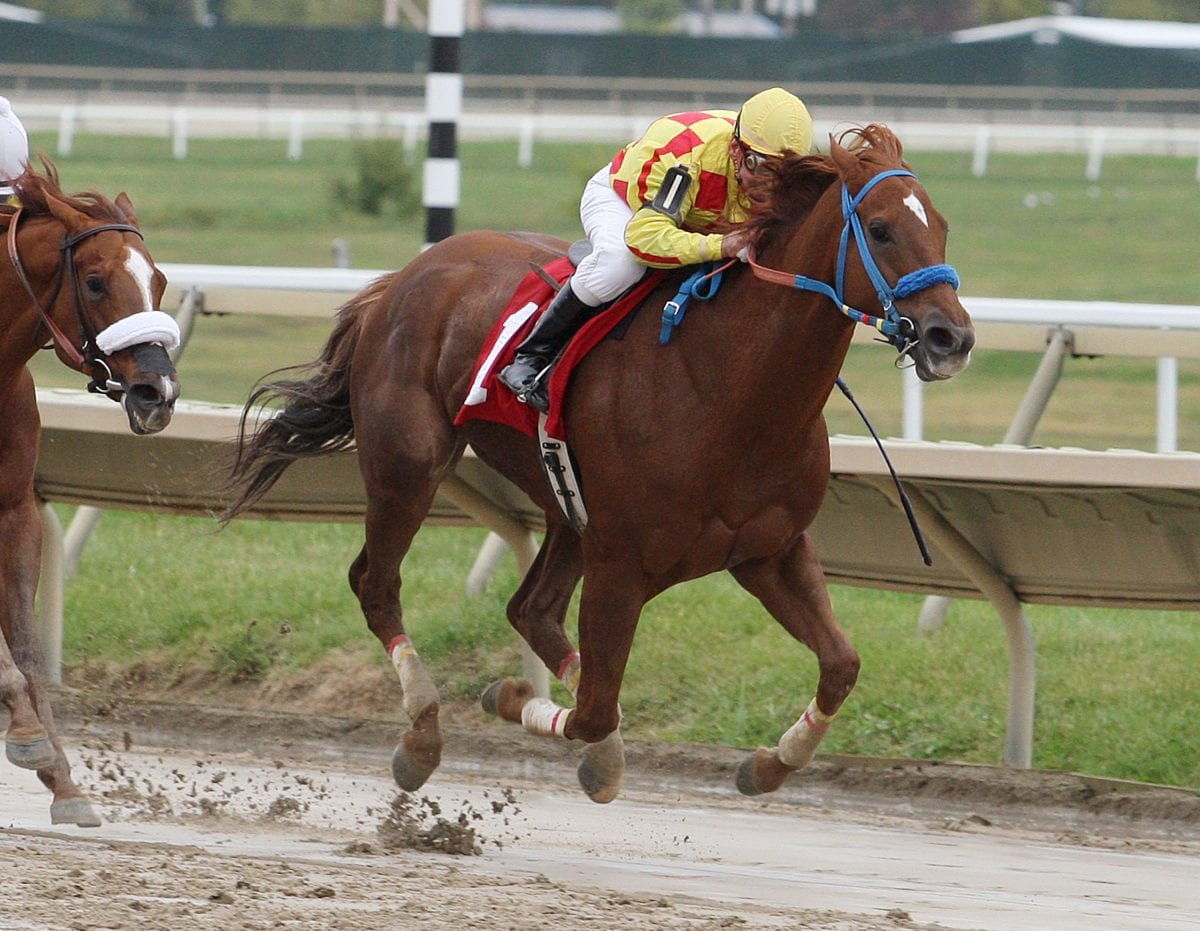 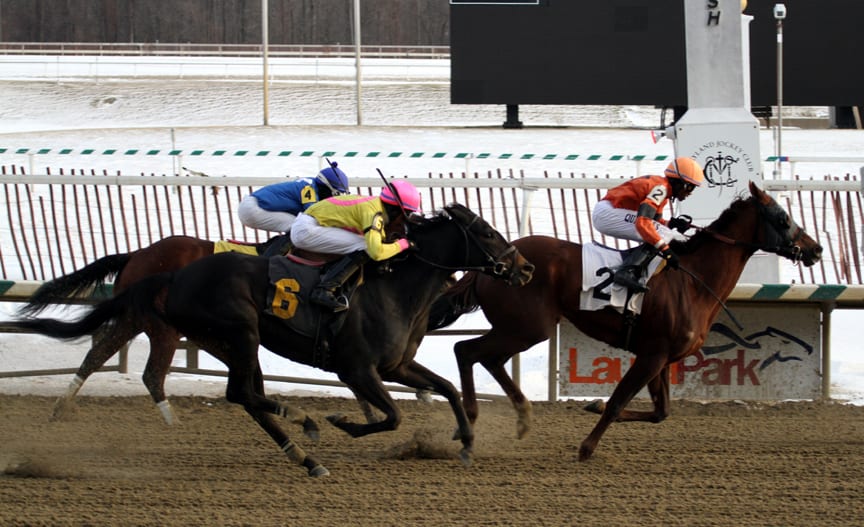 She’s Ordained (#2), finished second in the What a Summer in January 2014. Photo by Laurie Asseo.

Saturday’s most competitive and intriguing Laurel event may occur in the $100,000 Willa On The Move Stakes for fillies and mares three-years-old and up.

Not only did the Willa On The Move attract the two previous winners of the six-furlong event, but it also includes at least a handful of distaffers perhaps poised to garner the spotlight. In fact, unlike the day’s featured Jennings Handicap, where three-time defending champion and recent Maryland Million Classic winner Eighttofasttocatch will almost assuredly be the odds-on favorite, the defending champion of the Willa On The Move could be relegated to third choice by post time. 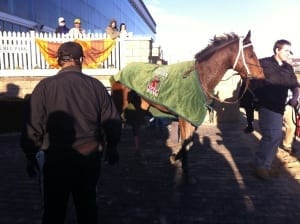 She’s Ordained, a five-year-old Ministers Wild Cat mare trained by Tim Kreiser for owner Ron Ulrich, won last year’s edition of the Willa On The Move three days after Christmas, but the durable mare has not won in six subsequent tries. She finished second to Winning Image in her next outing in the What A Summer Stakes at Laurel, but failed to win a race in the spring or summer and has been idle since running third in the Sweet and Sassy Stakes at Delaware Park behind Galiana and Winning Image. In fact, She’s Ordained spent most of the summer on the farm battling sickness.

“Right before we gave her some time off, she got sick and started losing weight,” Kreiser said. “We sent her to the farm and she continued to lose weight. She didn’t like being on the farm. She likes being at the track and training. She’s been training really well [at Penn National] lately with a couple of bullet works going five furlongs. She’s really starting to come back to herself, but she’s been away for a while so I’m not sure if she’ll run her best race down there on Saturday.”

With light rain expected throughout the day on Saturday, the Laurel Park strip could be rated less than fast, which Kreiser believes would enhance his mare’s chances for success. She’s Ordained, who sports a solid 14-6-7 slate and career earnings of over $385,000 from 36 lifetime tries, has done her best running in six-furlong events, where she owns a 9-6-4 slate and earnings just past $316,000. And in 12 starts on “off” tracks, She’s Ordained has five wins, has earned over $143,000, and has been worse than third just twice.

“I’m hoping that we get some rain down there,” Kreiser said. “She’s loves an off track or a wet-fast track. She’s been training really well, but she’s been off since July and I think a wet track would move her up. I know we have to face Winning Image again down there. It seems like I can never shake her.”

In fact, Winning Image, the second choice on the morning line, could easily be the post-time favorite for the Willa On The Move, a race she won on Dec. 15, 2012, but bypassed last year. A seven-year-old Southern Image mare trained by Michael Aro for owner Martin Scafidi, Winning Image returned to Laurel earlier this year to capture the What A Summer Stakes. In seven starts this year, Winning Image owns a 3-1-1 slate and earnings just under $200,000.

Winning Image is cross-entered in Aqueduct’s Garland of Roses and may choose that race instead.  Either way, Aro says Saturday could represent the swan song for the durable mare and for her rider, Anthony Black. They combined to take the Cornucopia Stakes at Parx on October 11, their third stakes win together.

“This is probably her last start,” Aro said of Winning Image. “I think this is going to be it for the old mare and then she’ll be sent to the farm and become a broodmare. I heard it’s going to be Anthony’s last ride. He really loves this mare. It’s going to be quite an emotional day. This mare has always run well for me. She’ll run on broken beer bottles, she’s just that type of horse. I was expecting a full field. Anytime you put up that type of money [$100,000] they don’t just give it away. Her last workout [four furlongs in 48 1/5 seconds at Parx] was the fastest of 40 horses that morning. I know She’s Ordained has been firing bullets at Penn National, so it should be quite a race.”

Whether Winning Image posts or not, there are plenty of other runners with the talent to get the money here.

Among those looking to foil the impromptu retirement party for Winning Image is a speedy, talented four-year-old filly who already boasts one recent victory over the favorite and the defending champion. Galiana, who owns a sharp 6-1-2 slate and earnings in excess of $210,000 from 10 starts this year for owner-trainer Rodolfo Romero, defeated both Winning Image and She’s Ordained when she captured the Sweet and Sassy Stakes at Delaware Park in July. While Winning Image has won both of her previous starts at Laurel and She’s Ordained has been first and second in two stakes outings over the surface, this will mark the local debut for the Delaware-loving Galiana who arrives with 10 wins and earnings of over $350,000 from 17 lifetime outings.  She did fire a bullet four-furlong work over the strip on November 20, however. 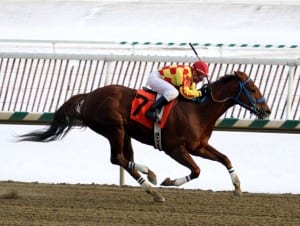 While Galiana will make her local debut, a pair of distaffers very familiar with the surface will look to enhance their local reputations and bankrolls on Saturday. Lady Sabelia, the morning-line favorite, a four-year-old daughter of Majestic Warrior trained by Robin Graham for owner-breeder Mrs. Frank Wright, has won three of four starts and earned over $100,000 this year.  She was third in last year’s edition of the Willa On The Move as the lukewarm 3-1 favorite. She was also third in the Cornucopia at Parx, but came right back to win an allowance dash here in sharp fashion.

While Lady Sabelia arrives in good form, Red’s Round Table will be looking to regain her winning ways from years ago. Winless in five starts this year for trainer Tim Keefe, Red’s Round Table has not found the winner’s circle since early 2012 and has lost eight straight races since winning eight of her first 10 outings. Red’s Round Table is owned by David and JoAnn Hayden’s Dark Hollow Farm, which bought her from the estate of Arnold Heft; Heft also owned presumptive Jennings Handicap favorite Eighttofasttocatch.

Disco Barbie will head into the Willa on The Move in good form for trainer Dale Capuano, having finished second in each of her last three starts all against graded stakes company. But Disco Barbie has also done her best running on synthetic surfaces in Canada, Pennsylvania and Illinois and may find the going tougher in the Willa On The Move over the main track at Laurel.

Recent Japanese import Unbound will make her local debut for trainer Graham Motion, while Dora Dora seeks to build on a good, second-place finish behind West Virginia-bred distaff star, Down Town Allen in the $200,000 Cavada Stakes when she makes a return trip to open stakes company for trainer Ollie Figgins, III of Dance to Bristol fame.