This guy, Jack on the Rocks, here winning the 2010 Maryland Million Sprint, was bought back to be retired by his former owners. Photo by Jim McCue, Maryland Jockey Club.

Not so many years ago, the answer to what became of end-of-career Thoroughbreds was… well, what was it?

Some ended up as riding horses or jumpers or pets.

But changing times mean changing social mores, and our national attitude towards animals has been one of the most compelling changes in our social landscape in recent years.  What once might have seemed acceptable, even desirable, in our treatment of animals — think dog racing — now in many circles no longer is.

Thus, in recent years, there has been increased focus on what becomes of Thoroughbreds when they’re no longer able to race.  And so we have people and organizations who rescue, rehabilitate, and rehome Thoroughbreds.  We have large organizations with national or regional scope — like the Thoroughbred Retirement Foundation — and tiny ones, practically one-man (or -woman) shops, like Thoroughbred Placement Resources.  We have programs run by volunteers, professionals, and horsemen, and funding that comes from donations, national foundations, and purse accounts. 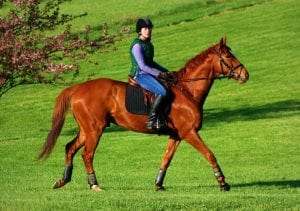 We have, in short, the beginnings of a solution to the question raised earlier: what becomes of end-of-career Thoroughbreds?

To be sure, we don’t yet have the entire answer, which ultimately lies with some version of “Social Security for horses,” and a changed racing ethos which sees horse ownership as one link in a continuous chain of care.

But those individuals and organizations working hard — often with shoestring budgets under difficult circumstances — to help our end-of-career horses, and to educate the public (and the racing industry itself) about what Thoroughbreds can do, they are doing critical work for which we are thankful.