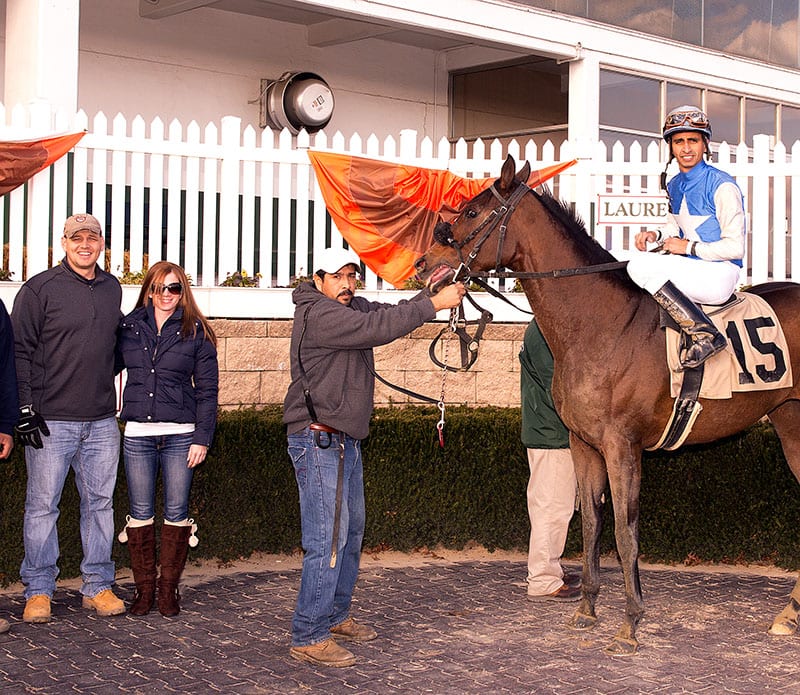 The 2014 Laurel Park winter meeting ended in March with four trainers tied atop the standings. With twenty-one live racing days remaining in the current fall stand, the same thing could happen again.

Hamilton Smith and Claudio Gonzalez are tied for first place with 18 victories, one more than both Mike Trombetta and Jamie Ness.

“It is a very even meet,” said Ness after winning Thursday’s fourth race with Downtown Hottie. “Hooking these big fields makes it tough. We have 23 second place finishes. The horses aren’t running badly, they are just getting beat. When I came here in 2012 I was the leading trainer but it has gotten a lot tougher. Competition only make you better. I am taking half my horses to Tampa so I better start winning at a higher percentage to stay in the race.”

Gonzalez, who shared the winter title with Kieron Magee, Hugh McMahon and Juan Vazquez, has won 15 races from his last 40 starters since capturing the Maryland Million Distaff Starter Handicap with Printasticat.

Smith saddled nine winners on the turf, with an average win ticket of $21.16, which included an upset over Ben’s Cat by Talk Show Man in the Maryland Million Turf.

Trombetta leads all conditioners in the first 44 days of the meet with nearly $800,000 in earnings.

Trevor McCarthy has a commanding lead in the jockey standings with 46 winners, 17 more than Victor Carrasco. The 20-year-old has won 143 races at Laurel and Pimlico this year.

A pair of Maryland traditions are in the offing next week.

Free donuts with coffee or cider will also be available from 9:30 to 11:00 a.m. Laurel’s Terrace Dining Room will feature a traditional, home-style Thanksgiving buffet for $28.

Friday features free admission to Laurel Park’s live program for all men as part of the “Guys Day Out” promotion, which includes half-priced domestic drafts and concession specials. Drawings feature tickets to the 140th Preakness Stakes at Pimlico Race Course on May 16, 2015, tickets to upcoming Baltimore Ravens and lift tickets to Ski Liberty, Ski Roundtop and Whitetail Resort.