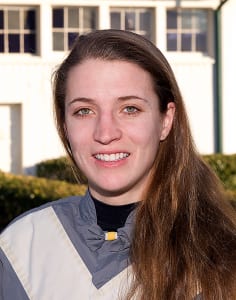 Forest Boyce, who has won nearly 350 races in Maryland during the last five years, will be moving her tack to Fair Grounds for the winter after receiving a call from recently retired rider Rosie Napravnik, who sat atop the jockey standings at the New Orleans track the last three years.

“It was really last minute. Rosie called, we discussed it and I decided to take the chance,” Boyce said. “I don’t even have a place to stay yet. They race five days a week in January and February, while we are going to be running three days at best and we are expecting another brutal winter like last year.”

The Fair Grounds meet begins Friday and runs through March 29, 2015.

“It is time to try something new and get out of my comfort zone,” added Boyce, who has ridden 346 of her 488 career winners (71%) at the major Maryland tracks. “It works out perfectly for me to be back for the start of the Pimlico meet (April 2).”

Boyce will ride at Laurel Park through Friday then is scheduled to ride Nellie Cashman in the Cardinal Handicap Stakes (G3) at Churchill Downs Saturday before heading to New Orleans.

The 30-year old has teamed up with Eighttofasttocatch for five stakes victories, including the last two runnings of the Maryland Million Classic and a second place finish in the 2013 Pimlico Special (G3). She plans on being aboard the son of Not For Love for his final career start in the Jennings Handicap here on December 6 for trainer Tim Keefe.

The Garrison Forest School graduate was runner-up for an Eclipse Award for outstanding apprentice in 2010. She was the leading jockey in the state with 104 victories at Laurel Park and Pimlico Race Course, winning 106 races from June 29-December 18 and capturing the Laurel Park summer and fall riding titles.

Laurel Park racing officials decided Tuesday afternoon not to use the turf course for the remainder of the year. Seven grass races were scheduled this week.

One hundred thirty-one grass races were conducted at Laurel this fall with an average win payout of $16.31. Forty betting favorites won races. The average field size was 10.4 runners per race.