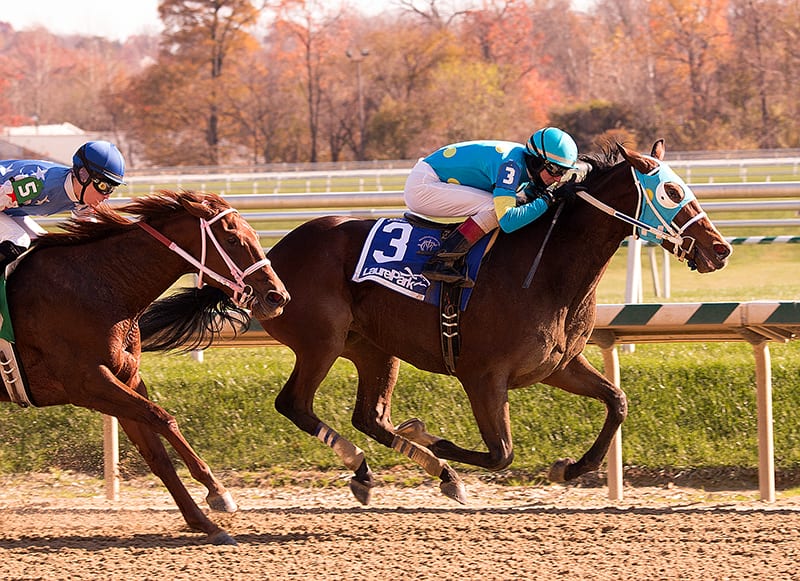 Lake Sebago was last of six moving around the turn before Trevor McCarthy sent her through a gap to catch E Dubai’s Humor and beat that one by half-length. Overprepared, the 2-5 favorite from the Todd Pletcher barn, finished third.

“Blinkers made a huge difference,” McCarthy said. “She worked great in them and I knew she was going to be tough today. She broke good out of the gate and relaxed nicely for me. We got a perfect trip sitting behind horses. When a hole opened up and I asked her to go, she really exploded the last eighth of a mile and stretched out nice.”

Jerry Robb trains the daughter of Munnings. The filly now has two wins and two seconds and four starts. She paid $56.40.

“They bet all the money on the New York horse,” said Robb. “I didn’t expect her to be favored but I didn’t expect 25-1. I expected her to win. She wore blinkers for the first time. I don’t like using blinkers the first few times out. She won her first race and the jockey came back and said she was green and needed blinkers but I couldn’t change them because she won. When she finished second in her last race I could put them on.”

Lake Sebago finished the 6-furlong test in 1:10.85 over the fast main track.