One year after his talented, older trainee Immortal Eyes splashed through the stretch to capture the $350,000 De Francis Dash by eight lengths, trainer Damon Dilodovico is hoping that one of his newest acquisitions, Smash and Grab, can duplicate that feat and defend the local runners on Saturday afternoon when the track hosts the latest renewal of its richest, most prestigious event. 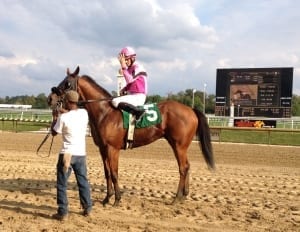 Warrioroftheroses scored a front-running Laurel score in September, a feat he hopes to replicate in the Dickie Small Stakes. Photo by The Racing Biz.

Dilodovico did not want to make too many comparisons between Immortal Eyes and Smash and Grab, a four-year-old Sharp humor gelding that he trains for Ronald Cuneo.  But he remains hopeful that his local ‘David’ can fend off the numerous goliaths who will be arriving for the Dash. Among the leading contenders for the DeFrancis Dash are invaders Dads Caps, Happy My Way, Bern Identity, Favorite Tale and Mico Margarita.  Local hero Ben’s Cat is expected to pass on the Dash for the upcoming Fabulous Strike at Penn National.  With such a cast, Smash and Grab is listed at 20-1 on the morning line.

“I’m certainly hoping that things break our way on Saturday,” Dilodovico said. “I’ve only had him for four starts, but he’s run well for me three of those times. The only time he really didn’t fire was in that race up at Charles Town. But he’s been working great and training great. He just raced two weeks ago, so hopefully the quick turnaround will not affect him too much. He bounced right back from that last race.”

A closer look at his career reveals that he has thrived at the six-furlong distance, winning six of eight starts and one-half of his overall bankroll.  Moreover, he has won five of six starts at Laurel Park and all four of his local tries at six furlongs.

His lone local setback was a sixth-place finish in the Grade 3, $250,000 General George last February at seven furlongs.  But Smash and Grab has won his last two starts at the current meet, taking an October 3 allowance dash in 1:09.30, followed by a November 1 score here in 1:10.36.

“He’s always done very well over the track and he loves the distance,” Dilodovico said. “Anytime you’re a 20-1 shot in a stakes race, especially one like the De Francis, you need a lot of things to go your way. But he drew outside [post 10] and hopefully he can stay clear of trouble and work out a trip and then be right there when [jockey] Jevian [Toledo] calls on him. I also hope he minds his manners in the paddock before the race. I heard he can be a handful at times, but if he minds his manners and saves his energy for the race then he should be okay.”

While Smash and Grab has always displayed a fondness for the six-furlong events on the main track at Laurel, several of the contenders in the De Francis Dash will also arrive with plenty of credentials, some including local success.

Dads Caps will be making his Laurel Park debut on Saturday, but he was recently second in the Grade I Vosburgh at Belmont Park and already boasts a victory in the Grade I Carter Handicap. Mico Margarita was 12th in the Breeders’ Cup Sprint but won two minor stakes at Remington Park and Prairie Meadows before that for trainer Steve Asmussen, while Favorite Tale captured the Grade 3, $200,000 Gallant Bob at Parx in his most recent outing.

“We’re definitely going to be one of the outsiders in the DeFrancis,” Dilodovico said. “He’s probably going to be 15-1 or 20-1, but he loves the track and he loves the distance. We’re going to need a lot of things to break our way on Saturday. Anytime you put up that kind of money [$350,000] you’re going to attract some good horses. Not many people thought Immortal Eyes would win last year and he ran a tremendous race. Not too many people will be picking this guy, but we’ll hope for a little racing luck and see what happens.”

In one of the stakes on the undercard, Dilodovico will saddle another Laurel lover, Warrioroftheroses, in the inaugural, $100,000 Richard W. Small Stakes, named in honor of the late, great local trainer who passed away in April.  Dilodovico noted winning the inaugural edition of the Richard Small Stakes would not earn much recognition, but it would certainly have plenty of irreplaceable sentimental value.

“Winning the first running of the Richard Small stakes would mean a lot to me,” Dilodovico said. “He was a great trainer and a great human being. He would always take time to offer advice on training horses, running horses, anything. He was a great horseman and tremendous human being. I’m hoping Warrioroftheroses wins that race and it has nothing to do with the money. It would be a big thrill and an honor for me as a trainer to win the first stakes race named for Dickie. I think a lot of other owners and trainers in there probably feel the same way.”