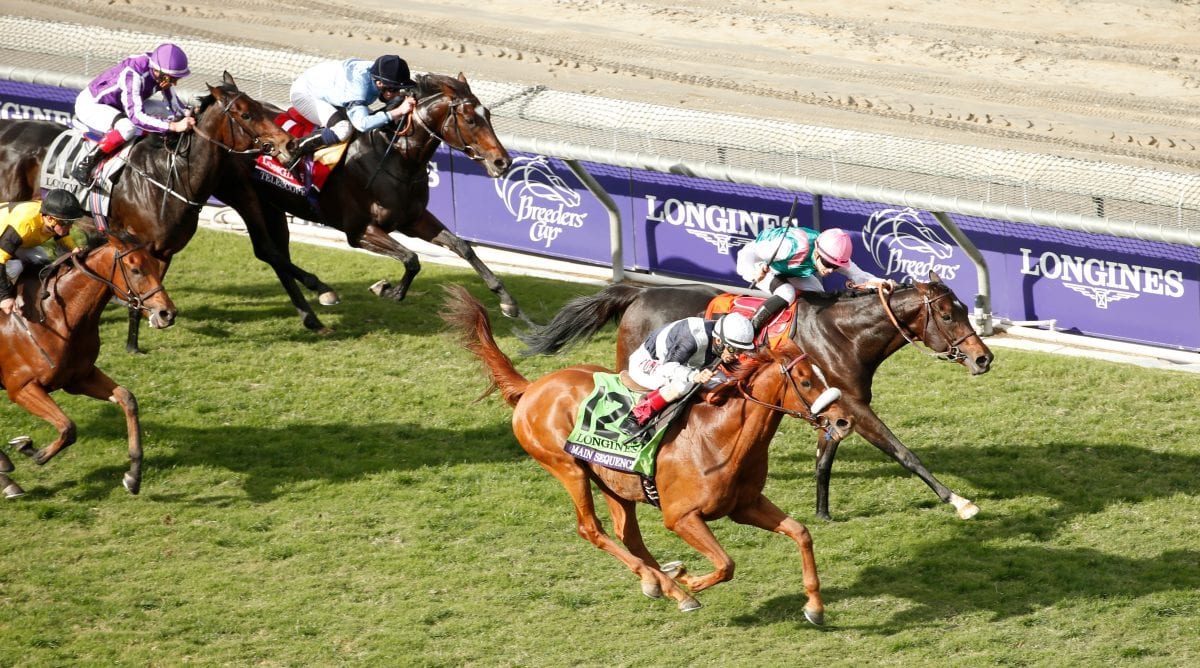 Main Sequence, on the outside, gets the better of Flintshire in the Turf. Photo by © Breeders’ Cup/Todd Buchanan 2014

In which we follow up on the mid-Atlantic-based or -bred horses we highlighted prior to the weekend:

For mid-Atlantic purposes — and arguably for any purposes at all — the weekend’s biggest winner was Main Sequence, the Kentucky-bred son of Aldebaran based in Graham Motion’s barn at Fair Hill.  All he’d done since coming over from Europe — where he’d labored against the continent’s best — was win three Grade 1 events in succession.

But on Saturday, in the Turf, he figured to face some of those rugged customers.  Even after the scratch of defending champ Magician, there was still multiple Group 2 winner Telesecope; Brown Panther, entering off a six-length win in the Group 1 Irish St. Leger; and Arc de Triomphe runner-up Flintshire.  So perhaps it was no surprise that Main Sequence’s multiple G1 credentials could net him no more than 6-1 odds as the horses left the gate.

By the time it was over, however, he’d proven best, rallying from ninth in the early going and outfighting Flintshire to the wire for Motion’s third career Breeders’ Cup victory.  With regular rider Rajiv Maragh injured, John Velazquez did the honors.

Virginia neighbors Magalen Bryant and Rene and Lauren Woolcott had quite a lot of interest in the Breeders’ Cup Classic.  Bryant owns V. E. Day, and the Woolcotts bred Tonalist, and their two horses had split two prior meetings, with the former winning the Grade 1 Travers and the latter taking the Grade 1 Jockey Club Gold Cup earlier this year.

Neither, however, had much impact on the big race.

Tonalist, sluggish early, ran on willingly late and got up to fifth place before running out of real estate.  “He wasn’t really happy with the track,” rider Joel Rosario said.

Still, it was a better outcome than V. E. Day’s.  Though starting among the horses pinballing in the first jumps, his slow start enabled him to avoid most of the trouble.  But after that, he was never able to get involved and ended up in 11th place.  “He just wasn’t up to the top horses,” jockey Joe Talamo said.

Breeders’ Cup weekend began with the Juvenile Turf and, for mid-Atlantic racing followers, the aptly named International Star: a horse bred in New York by Maryland-based breeders Katy Voss and Bob Manfuso and whose greatest racing success had come in Canada.

Bettors weren’t too impressed with the son of Fusaichi Pegasus, despite his win in the Grade 3 Grey Stakes at Woodbine; they sent him off at 36-1 odds, second-longest in the field.  He outran that reckoning, but that wasn’t enough to get him much of a sniff, and he finished ninth, though beaten by less than four lengths.  Wesley Ward trainee Hootenanny rolled up late to beat Ward’s other horse in the race, Luck of the Kitten, for the win.

Neither, however, was any match for ultra-impressive Chad Brown trainee Lady Eli, who romped to a nearly-three-length victory in a sharp 1:33 2/5 seconds.  Rainha Da Bateria, well back early, rallied only mildly to be ninth.  And Nicky’s Brown Miss, up close for half a mile, faded to be last.

Kelly Breen, winless in four prior Breeders’ Cup tries, had two legit chances to end that skein this weekend.

On Friday, Pants on Fire tackled defending champ Goldencents in the Dirt Mile and ran a good race — but not good enough.  Goldencents dazzled, drilling a 44 4/5 seconds opening half-mile, then continuing on bravely to hold off Tapiture, with Pants on Fire back in third.

He also hinted that it might not be the horse’s last visit to the Breeders’ Cup.  ‘If he comes out of this race as well as I hope, maybe we’ll be back again,” he said.  “Maybe Goldencents won’t be here then and we will.”

On Saturday, in the Filly and Mare Sprint, Breen sent out three-year-old Stonetastic, the winner of the Grade 2 Prioress at Saratoga in August.  Stonetastic did the early running, leading the field through the first five furlongs of the seven-furlong race.  In the end, though, the late-runners came and got her, with Judy the Beauty, who’d run second in this race a year ago, earning a head victory over deep closer Better Lucky.

Stonetastic, a daughter of Mizzen Mast, is another who might be back in a year.

“This is the curse of the younger versus the older horses.  You have to be an exceptional 3-year-old filly to beat older in these kinds of races,” Breen said.  “We’ll come back and get them next year.”

The lone horse bred in the region to show up on the weekend also ran in the Filly and Mare Sprint.

Thank You Marylou, the Virginia-bred Birdstone filly trained by Mike Maker for Ken and Sarah Ramsey, startled the bettors who made her, at 39-1, the longest shot on the board.  She fought all the way to the wire to earn the show spot.  It was probably the best performance of her career.

“I told Mr. (Ken) Ramsey to bet everything to show on her,” Maker said.  “She will stay in training next year.”

Thank You Marylou has now finished third four times, twice in Grade 1 company, in 10 career starts (though one of those thirds became a second via disqualification). 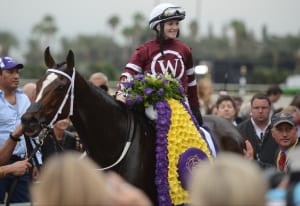 Rosie Napravnik, aboard Untapable, smiles after what is, for now, the final win of her career, in the Breeders’ Cup Distaff. Photo by © Breeders’ Cup/Weasie Gaines 2014

New Jersey native Rosie Napravnik, the top jockey who began her career in Maryland, announced her retirement to start a family with husband Joe Sharp.  Napravnik is pregnant with the couple’s first child.

“Although I will certainly miss being in the saddle, I am extremely excited to become a mom,” she said.  “I have been so incredibly fortunate in this business, and I feel as though I have had the opportunities to experience the very best of the racing industry, and for that I am so grateful.”

Napravnik, who said that her retirement is “indefinite,” won Friday’s Distaff aboard Untapable, her second Breeders’ Cup victory.  She also finished second twice this weekend, with Tapiture in the Dirt Mile and Top Decile in the Juvenile Fillies.