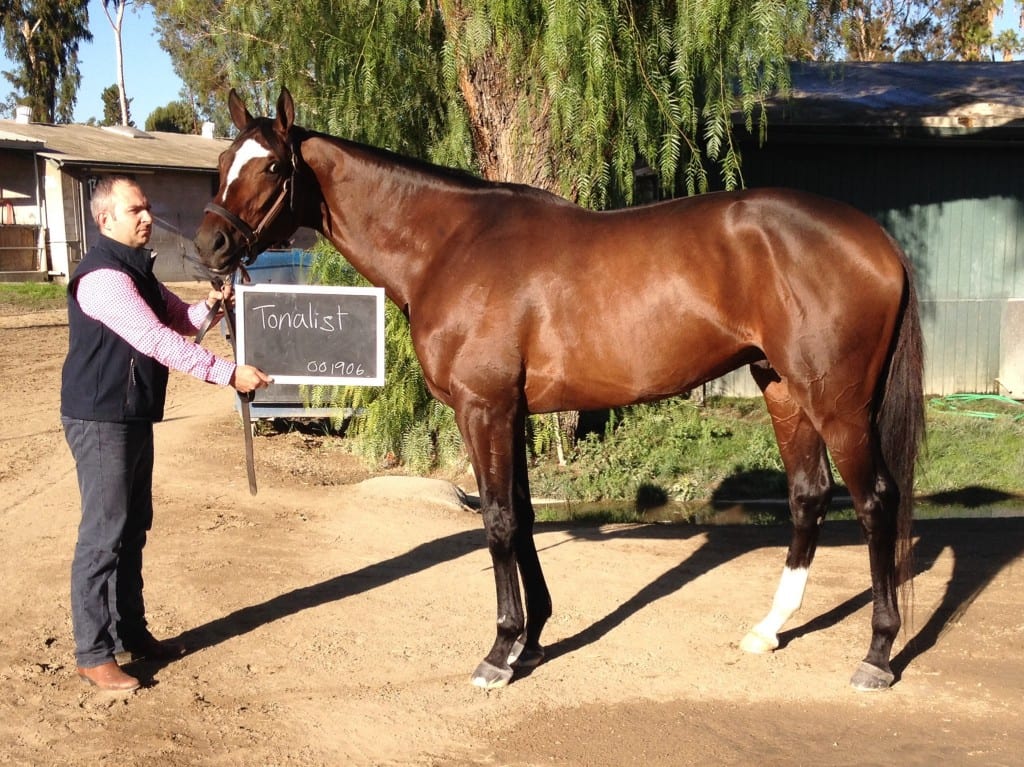 Tonalist at his Santa Anita digs. Photo by Lauren Woolcott.

Last weekend it was in The Plains, this weekend Arcadia, California.  Whether on the East Coast or West Coast, racing for Gold Cups or canoes, two Virginia racing outfits keep bumping into each other at racing’s most prominent venues.

Rene and Lauren Woolcott of The Plains and Magalen O Bryant of nearby Middleburg spent the summer passing passed each other in elevators, lobbies and airports, at Saratoga and Belmont Park.  The Woolcott’s Woodslane Farm is the breeder of Belmont Stakes (Grade 1) and Jockey Club Gold Cup (G1) winner Tonalist, owned by Robert S. Evans.  Bryant owns the Travers (G1) winner V. E. Day.

Good thing they are now friends.  Their horses have faced each other in the last two starts.  V. E. Day outrallied Tonalist to win the Travers, and Tonalist overcame his rough trip in winning the Jockey Club Gold Cup.  Midweek, Lauren Woolcott, the first to arrive at “pristine and sparkling” Santa Anita Park, sent pictures of V. E. Day.  Meanwhile, the Bryant clan was traveling west.

Tonalist won on one of racing’s largest stages in years when he prevailed in the stretch of the Belmont Stakes and ended California Chrome’s campaign at immortality.  Woodslane is the breeder of this often overlooked colt that Evans bought in a private sale when the horse’s $195,000 reserve was not met at the 2012 Fasig-Tipton Saratoga Sale.

The Tapit colt, out of Settling Mist, by Pleasant Colony, saw his 2014 campaign spring out of an impressive win in the Grade 2 Peter Pan Stakes.  With a win in Saturday’s Breeder’s Cup Classic, it would be hard to overlook him for Horse of the Year honors.

“You can’t go through something like this without being affected.  To be known to breed a horse like this is incredible,” said Wolcott. “Yet, if you start believing your own PR, you’re sunk.”

Woolcott is more familiar with the Eastern steeplechase circuits but now is eagerly learning the Thoroughbred game.

“I’m certainly paying a lot of attention to this three-year old class,” she pointed out.

She now knows Bayern after the Travers pacesetter and Tonalist “got into it” in the early part of the Travers, won by Bryant’s V. E. Day.  Tonalist would turn the tables in the Jockey Club Gold Cup.  Both colts had troubled trips — Wicked Strong clipped heels and unseated his rider, forcing much of the field to steady and swerve — but Tonalist was able to overcome his.

Bryant was present at Colonial Downs in 2005 and saw English Channel win the Virginia Derby in a commanding performance, similar to his Colonial Turf Cup win a month earlier.

“She loved the horse, and said she’d like to find an English Channel to buy,” explained Cindy Tucker, her racing manager who spent the next several years scouting sales for a candidate, finally finding this colt, out of the unraced Deputy Minister mare California Sunset.

After two tries on the Gulfstream turf, V. E. Day broke his maiden in May over Belmont’s sloppy main track in a race pulled from the turf.  After notching a turf win next time out, trainer Jimmy Jerkens saddled him to a win in Saratoga’s Curlin Stakes on dirt; that set him up to shock the Travers, edging Wicked Strong by a nose at 19-1.  That gave Bryant’s colt four straight trips to the winner’s circle. 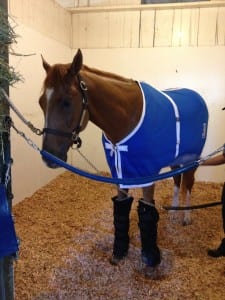 The Breeder’s Cup Classic is well represented by three-year-old talent, including undefeated favorite Shared Belief, Kentucky Derby and Preakness winner California Chrome, Bayern, Toast of New York, and Candy Boy.  Just about all the three-year-olds have shown up, and that’s before you get to the older horses.

“He’s got a great shoulder and a good attitude, [and] he’s gotten better and better,” observed Tucker.  “I like our chances.  I’m cautiously optimistic.  We’ve beaten most of the horses in this field.”

That includes Tonalist, the breeder of which Tucker met for the first time at the Plains at the October 25th International Gold Cup.  They were standing behind each other and watching the opener and each had a horse in the race.

In that contest, Bryant’s jumper, Plated drew even with Woodslane’s Overwhelming at the final gate just as the latter was about to inherit the lead.  Plated then outsprinted Overwhelming to the wire.  That race was three times longer than Saturday’s Breeders’ Cup Classic and over timber, water and hills.

Plated’s maiden special weight win and the Breeder’s Cup Classic demonstrate that whatever the business or politics of the time, whatever the stage and venue, racing at heart can still be just a sport among neighbors, one from The Plains and one from Middleburg.

As they parted the Gold Cup, they looked forward to following Saturday and exchanged good-byes.