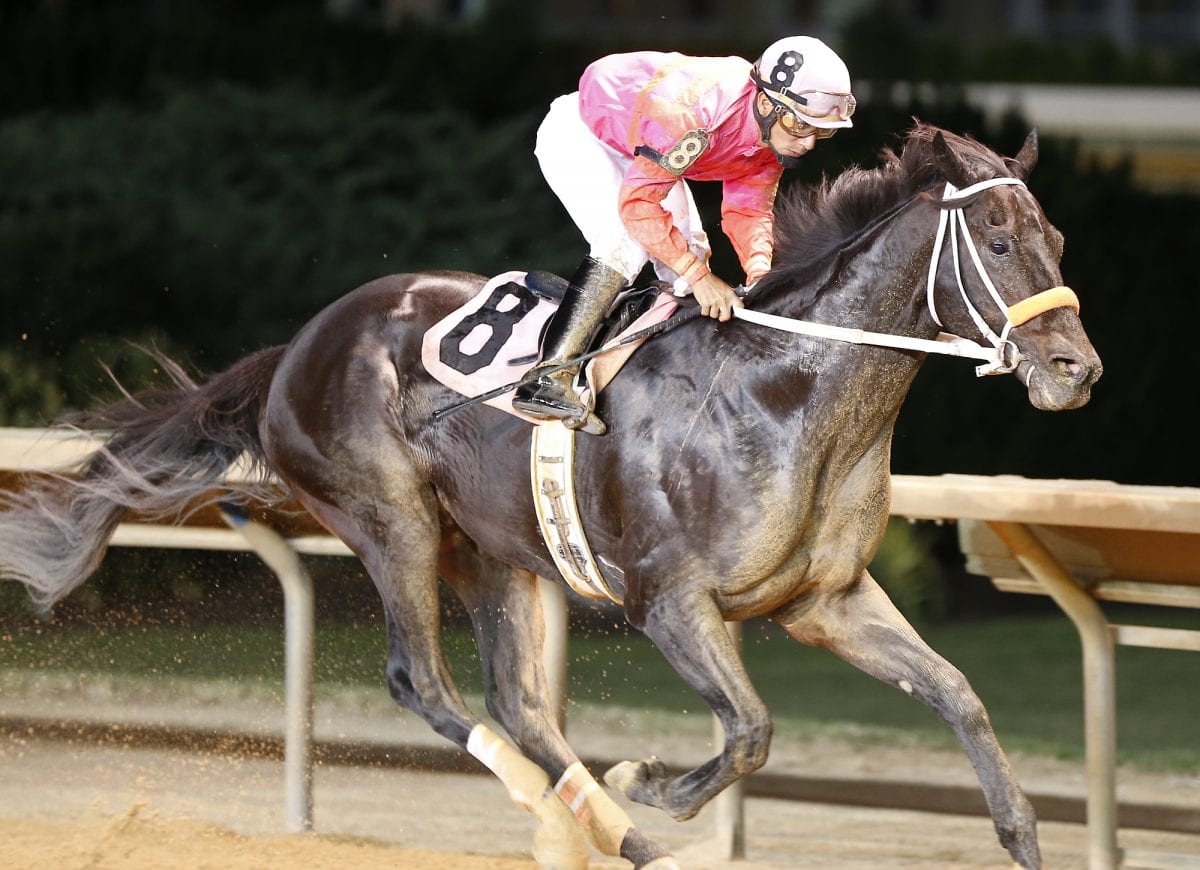 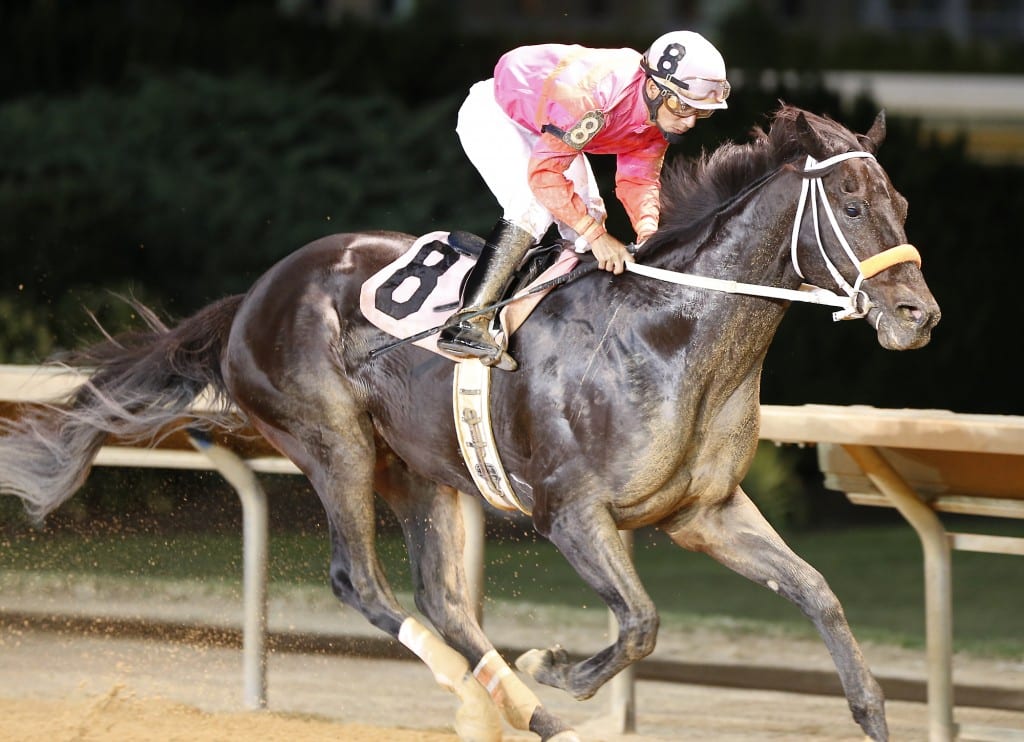 Pants on Fire was much the best in his last start, in the Wild and Wonderful at Charles Town. Photo by Jeff Brammer.

As an 89-pound high school freshman on the wrestling team, Kelly Breen dreamed about being a jockey. Growing up in Old Bridge, New Jersey, he went to nearby Monmouth Park with his family, and though small and light enough to think he’d have a shot, he realized that he’d unlikely be able to develop the skills he’d need to succeed in the saddle.

So instead, he headed to the backstretch…and to the big city.

“My dad and my brother were Local 368 steamfitters in Manhattan, and I actually went through a couple of years of the apprenticeship,” said Breen this week at his barn at Santa Anita, where he’s preparing Stonetastic and Pants On Fire to run this weekend.

At the same time that he was working construction in New York City, he was also working for trainer John Forbes, one of several Mid-Atlantic conditioners under whom he worked en route to going out on his own.

“I’d say my main tutelage came from Ben Perkins Sr.,” he said. “I also worked for Walter Reese, Jeff Kirk, Anthony Sciametta, all good Mid-Atlantic guys. I got a good knowledge of people that win from them.”

He saddled his first horse in 1992 and was the leading trainer at Monmouth in 2005 and 2006. In 2011, he won the Belmont Stakes with Ruler On Ice, who finished third that year in the Breeders’ Cup Classic, the best finish of Breen’s four Breeders’ Cup starters.

Breen has two chances to better that record this year, starting Friday in the Dirt Mile with Pants On Fire, the 6-1 co-third choice on the morning line for owners Greg and Lori Hall, for whom Breen trained privately for a number of years. The multiple graded stakes winning six-year-old has earned $1.3 million from 28 starts.

“He’s our warrior horse,” acknowledged Breen. “He’s coming back stronger each and every year and posted three triple-digit Beyers in his last four races. I think that’s a testament to the horse and to the Halls.”

Though a trip to Japan to run in the Japan Cup last December resulted in a disappointing 16th-place finish, the trip was not, said Breen, a total loss.

“Pants On Fire used to have a couple of idiosyncrasies about going into strange places a little bit,” explained the trainer. “He wasn’t the best of horses going into confined areas, and we worried about him getting on the plane and that sort of thing. But he’s matured; this is his fourth track in his last five starts, and he’s handled it like a champ. If anything good came out of running in Japan, he seems like a more relaxed, more focused horse.”

On Saturday, Breen will saddle three-year-old Stonetastic in the Filly and Mare Sprint, where she is 8-1 on the morning line. After breaking her maiden by 12 1/2 lengths in her debut at Monmouth Park as a two-year-old, Stonetastic has failed to hit the board just once in eight starts, winning twice this summer by open lengths.

The daughter of Mizzen Mast-Special Me, by Unbridled’s Song, burst on the national scene with a flashy eight-length score in the Grade 2 Prioress in August at Saratoga.

Third most recently in the Grade 2 Thoroughbred Club of America, Stonetastic may have bounced, but Breen thinks his filly, owned by Stoneway Farm, didn’t like the new dirt track at Keeneland.

“Her action to me was not of a horse that was comfortable,” he said, “and I thought she still ran a game performance when she gutted it out to finish third. They went awfully fast early, so while this race on Saturday is an extra furlong, hopefully they’re not going to go as fast in the first quarter, which should give us the staying power to be right there when they finish.”

Breen and his horses have been at Santa Anita for more than a week; Stonetastic breezed here on October 25 in a work that pleased her trainer.

“She looked dynamite,” he said. “Comfortable, not at like what I saw at Keeneland.”

Breen is still based at Monmouth in the summer, still describes himself as a “Jersey boy,” despite his success beyond the borders of the Garden State.

Which doesn’t mean that he’s not concerned about the state’s racing and breeding industries, whose fortunes have shifted over the last few years.

Stonetastic wins the Prioress at Saratoga. Photo by NYRA.

“We had such a big push when we had the Breeders’ Cup and then our championship meet,” he said. “I’m not into politics but it seemed like we were thrown under the bus by the governor, and everything was pushed towards Atlantic City, and it was the wrong call.”

“Monmouth Park is still doing well,” he continued, “and I think that if more things happen with racing in Jersey, whether it’s a little help from slot machines or sports betting or whatever it may be, the more power to us. Monmouth Park is too nice of a facility for it ever to be tarnished.

“It’s my home, I grew up there, and being leading trainer there was one of the first feathers in my cap. I absolutely love it.”